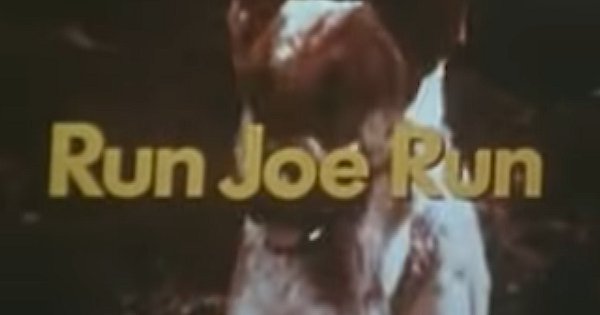 I’m looking for an old TV program. It’s called Run, Joe, Run about a German Shepard and an Army man who are partners.
Lisa

Run, Joe, Run (not to be confused with Run, Buddy, Run) was a live-action Saturday-morning kid’s show that aired on NBC from 1974 to 1976. Thirteen episodes were produced over the course of two seasons and, as was common with such shows, rerun constantly. Joe was German shepherd with the K-9 Corps who was accused of attacking his trainer. He escaped before he could be euthanized and thus the military placed a $200 bounty on his head.

Each week Joe helped someone in trouble even as his trainer and friend Sergeant Will Corey (played by Arch Whiting) chased after him, knowing that Joe had been falsely accused. Over the course of the first season the two came close to meeting but never did. When the second season premiered, Sgt. Corey had been recalled to his unit and Joe settled down with a new partner in the form of hiker Josh McCoy (played by Chad States).

Here’s how Bill D’Angelo explained the show’s conception to The Los Angeles Times in July 1974:

Richard Landau brought this idea to me about four years ago when I was producing Love: American Style. Ok, it’s The Fugitive, it’s Run for your Life. But they were “Les Miserables.” The part Whiting plays, the trainer, I think of as Ahab in “Moby Dick.” Joe is his white whale. Not that he wants to kill him or lock him up. The dog just doesn’t understand…

We tried for years to sell this as a prime-time show but no network was interested. Last winter, Joe Teritoro, head of children’s programs at NBC, asked if I’d do it as a kid show. I’d never done a kid show, but this was a chance to open my own shop: D’Angelo Productions. So here we are. [1]

Joe was played by D’Angelo’s own dog, Heinrich (whose mother was owned by William Self of 20th Century-Fox); Heinrich’s stunt double was another German shepherd named Gus [2]. Run, Joe, Run premiered on Saturday, September 7th, 1974. In May 1975, Cecil Smith praised the series, noting that “in writing, acting and production, it is the equal of almost any of the nighttime adventure shows” [3]. It was last seen on September 4th, 1976.