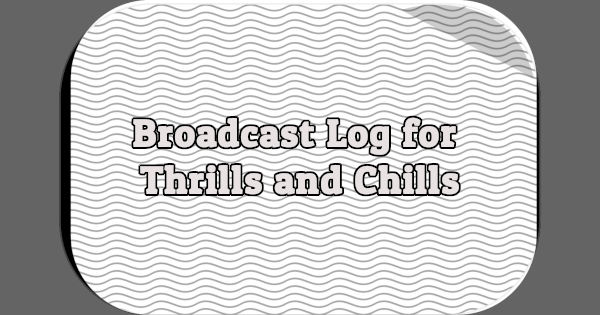 Each episode saw Allan interviewing an explorer or adventurer and presenting films of an exciting expedition. The series was on the air for nearly five years. It moved from WNBT to experimental DuMont station W2XWV in 1942 and went off the air in 1946.

What follows is an incomplete broadcast log for Thrills and Chills, drawn primarily from television listings published in The New York Times as well as The Billboard and Radio Daily.

The first known broadcast of Thrills and Chills was on Wednesday, August 27th, 1941. The guest was Faustin Wirkus. For the next few months the series was seen irregularly on WNBT.

In late November 1941, Thrills and Chills began airing every Tuesday at 8:30PM ET on WNBT.

The series shifted to Wednesdays at 8:30PM ET in February 1942 where it remained for a little over a month. It was then off the air for roughly a month. It then returned in May for two weeks, airing on Sundays.

At some point in 1942, and for reasons unknown, WNBT dropped Thrills and Chills. It then moved to DuMont’s experimental New York City station W2XWV. At least one episode aired in August 1942. In November 1942, the series began airing every third Sunday. The station more or less stuck to that schedule until March 1944.

Thrills and Chills is missing from television listings published in The New York Times for roughly six months. Whether it was actually off the air during that period is unknown. Various sources–The Billboard, Radio Daily, and The New York Times–suggest the series returned in October 1944 but only a few episodes aired just once every month until January 1945 when it disappeared again.

When Thrills and Chills returned in June 1945, it aired weekly on Thursdays for just four weeks before switching to a biweekly schedule.

By 1945, W2XWV had become commercial station WABD. The station signed off on September 20th, 1945 to transition from Channel 4 to Channel 5 and did not return to the air with a regular program schedule until April 15th, 1946. When it did, Thrills and Chills was back as well, airing weekly on Wednesdays for six weeks. The final known broadcast took place on Tuesday, June 4th, 1946.

No episodes of Thrills and Chills are known to exist. The series was broadcast live prior to the introduction of the kinescope. There is no evidence the series aired outside of New York City.