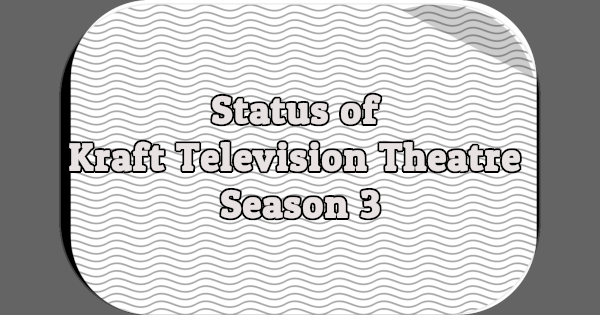 Season 3 of Kraft Television Theatre premiered on September 1949 and ended in September 1950. There were no pre-emptions this season. NBC broadcast 53 episodes, of which 14 are known to exist in their entirety.

The Library of Congress has 14 episodes in its collection, five from 1949 and nine from 1950. One of these episodes, “January Thaw,” was earlier presented in October 1947 during Season 1. This restaged version can also be found at the UCLA Film & Television Archive.

(Another episode from Season 3, “Kelly,” was restaged in January 1951 during Season 4. Although the Library of Congress, the UCLA Film & Television Archive, and the Museum of Broadcast Communications all have copies of the 1951 version, no copies of the original 1950 version are known to exist. The entry in UCLA’s online catalog is dated incorrectly.)

The Library of Congress also has a short reel of 16 mm film containing “outtakes” from “The Wind is Ninety,” which aired in June 1950. This is likely rehearsal footage.

Keep in mind that just because the big TV archives/museums only have certain episodes doesn’t mean there aren’t additional episodes of Kraft Television Theatre from the 1949-1950 season out there somewhere.