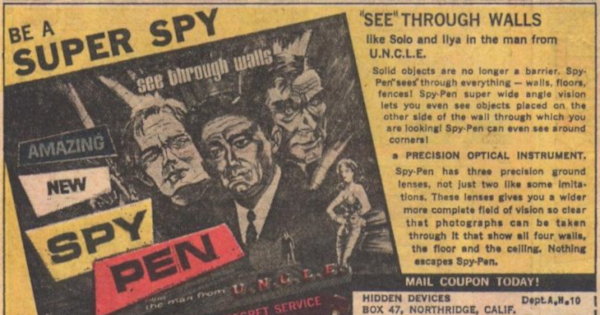 Here’s an advertisement for a Spy-Pen toy based on The Man from U.N.C.L.E. that was published in the October 1966 issue of Marvel’s The Avengers comic book. Specifically, issue #35. The advertisement features Robert Vaughn, David McCallum and Leo G. Carroll and offers the ability to “see” through walls.

The Spy-Pen was “developed by the German Secret Service in World War II” and is “used by Interpol” and features “three precision ground lenses, not just two like some imitations.” Apparently, it can see around corners and photographs can be taken through it. All for just $1.98 plus 27 cents shipping and handling.

Does anyone still have their Spy-Pen?