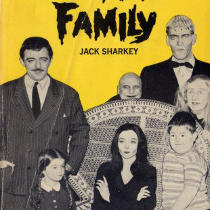 The release of this novel coincided with the premiere of the second and final season of The Addams Family on ABC. It’s actually less a novel than a collection of short stories (or chapters, as the table of contents calls them) only a few of which are connected. Most are entirely standalone tales. In the first chapter, “Be It Ever So Horrible,” the Addams family moves into their mansion, in the process terrifying a real estate agent and his secretary to such an extent that they pack their bags and flee. I can’t speak to the accuracy of the description of the mansion, although I assume it reflects the first season of the series (or at least its scripts). The characterization, however, is spot-on, and I could easily picture John Astin as Gomez Addams throughout the novel. The same goes for the other characters as well, to a somewhat lesser extent.

The second chapter, “What is the Sound of One Hand Cackling?,” introduces Thing, who is discovered when doors mysteriously close and other items just as mysteriously go missing. Eventually, after determining that a member of the family is not responsible, Gomez deduces that the house has a helping hand. But he can’t get the hand to show itself. The family tries to think of activities that a single hand cannot do for or by itself, throwing out suggestions like applauding, twiddling thumbs and clipping fingernails. Suddenly, Gomez has a flash of insight and calls out the date and time, by Chinese reckoning.

Thing then shows itself and through a note apologizes and recognizes the Addams as its new master. Gomez explains:

“If Thing were a single hand, then it was very likely a product of the Far East, where one of the philosophical considerations of Zen Buddhism is the question, What is the sound of one hand clapping? Therefore, it probably reckoned the passage of time according to the oriental calendar. Until it knew how much time had elapsed since the departure of the former owner, it would not realize we were new tenants in the building, but merely consider us burglars, or gypsies, or vagrants who crept in while the former owner was away.”

Furthermore, Gomez realized that the one thing a single hand could not do for itself was wind its calendar-watch after it wound down. So he wound the watch for Thing and then suggested the family purchase Thing a self-wind watch. I believe the television series established that Thing had been with Gomez Addams since childhood, but not until the second season after this novel was written and published. 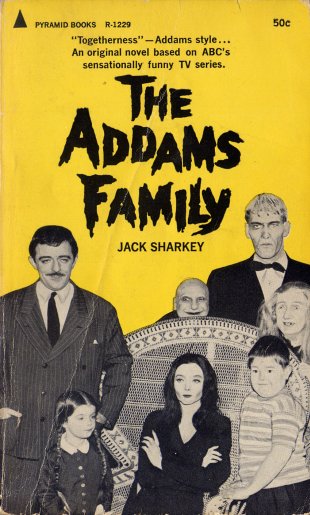 Later chapters see Wednesday and Pugsley attending school, Fester being called up by the Army, Gomez inventing a Pentatronic Esthesidor (which translates every experience into all five senses at the same time), the Addams family throwing a Halloween party and Morticia leaving for a brief vacation in the hopes of reigniting Gomez’s passion for her (it works). The chapter about Fester being called up by the Army reveals that Fester served with George Washington at Valley Forge. Washington thought Fester was inept because of the creaky oar locks Fester was fond of. The recruiters, of course, think Fester is trying to get out of serving by acting insane. He tells a doctor that his family physician used to be Hippocrates.

Another chapter has Gomez deciding to open a medical practice to “devulnerize” monsters (i.e. help vampires go out in the sun or werewolves handle silver). It appears to work perfectly at first and he “devulnerizes” a mummy, a Frankenstein monster, a werewolf and a vampire. But he has only unleashed new monsters. The mummy, no longer addicted to tana leaves, has become a photographer specializing in the Don’t-Let-This-Happen-To-You genre. The monster, no longer afraid of mobs, becomes a wrestler. The werewolf, no longer averse to handling silver, runs off with the Addams family silverware. And the vampire, after seeing his reflection, gets a tan and turns into a handsome used-car salesman. Gomez decides to close his clinic. 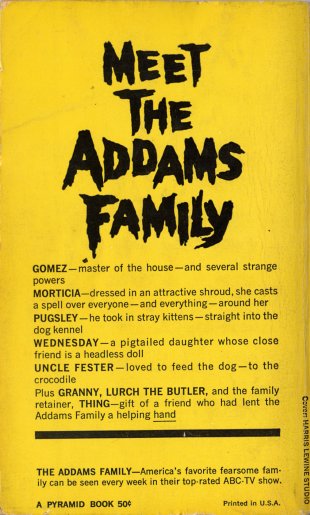 In the final chapter, “After Cousin Charles, What?,” Morticia and Gomez discuss their decision to let Cousin Charles depict the family in his artwork. Gomez feels that the family’s example needs to be seen by more people than just the handful who see the art (A family such as ours must exist as a guiding light, Tish!”). Morticia then surprises him with the news that she has arranged for the family’s home life to be televised weekly, by scrimping her grocery money. Gomez worries that it will be local but Morticia explains that it will be on one of the three leading networks. She won’t tell him which one, though, only hinting that “it’s as simple as A-B-C-!”

Despite not actually being a novel in the sense that each cheaper furthers a single narrative, this was a very enjoyable read. Pyramid Books published a second novel, The Addams Family Strikes Back by W.F. Miksch, which is apparently harder to come by. I can’t say whether it was an actual novel or not.