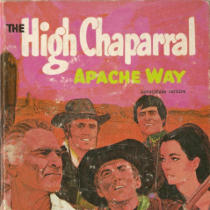 Although I’m a huge fan and collector of TV tie-in novels, I don’t own a lot of Whitman TV tie-ins. Whitman Publishing, a division of Western Publishing Company, Inc., got into the TV tie-in business early. Its hardbacks are distinctive, with colorful illustrations on the front and back covers. Most feature an “Authorized TV Edition” or “Authorized TV Adventure” logo on the front cover or spine.

As I discussed way back in September 2010, Whitman may very well lay claim to having published the very first TV tie-in in 1951: Gene Autry and the Badmen of Broken Bow. However, the company had been publishing Gene Autry and Roy Rogers books since the 1940s, based on radio shows and movies. The 1951 book seems to have simply been a continuation of Whitman’s line of Autry novels rather than a true tie-in to Autry’s CBS television series, which premiered in July 1950.

Later Whitmans were definitely TV tie-ins. Between 1951 and 1975, the company published dozens of books based on Westerns (Gunsmoke, Bonanza, Cheyenne, Circus Boy), sitcoms (The Munsters, The Beverly Hillbillies, Bewitched, Leave It To Beaver, Gilligan’s Island), science fiction/adventure/spy series (The Green Hornet, Land of the Giants, The Man from U.N.C.L.E., Mission: Impossible, Voyage to the Bottom of the Sea) and everything in between (The Lawrence Welk Show, The Mickey Mouse Club, Dr. Kildare).

The very first original story based on NBC’s Star Trek was a Whitman. Mission to Horatius by Mack Reynolds was published in 1968. Pocket Books reprinted the book in 1996 to commemorate the 30th anniversary of Star Trek. The last of the Whitman TV tie-ins were a series of six books based on The Waltons, all published in 1975. 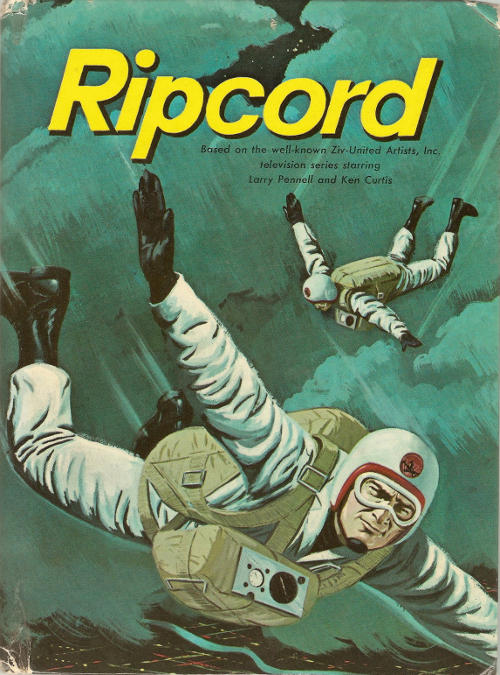 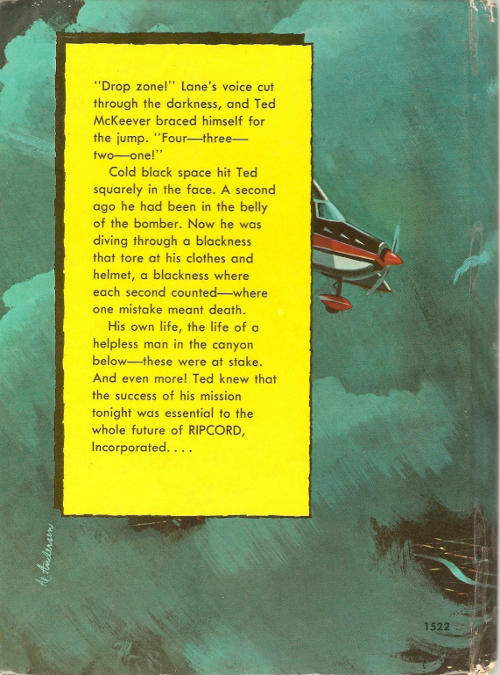 I have three Whitmans in my TV tie-in collection:

I believe I purchased these individually at used bookstores but can’t quite recall. The Ripcord book, based on the syndicated Ziv series, has a glossy laminated cover and is 5.75 inches wide. The covers on the other two aren’t glossy and they are 5.25 inches wide. All are 7.75 inches tall. Both the Ripcord and Ironside books feature limited interior illustrations. I don’t plan on adding many more Whitman TV tie-ins to my collection. I prefer paperback tie-in novels. I might try to acquire a copy of the book based on The Rebel at some point. And I wouldn’t mind reading the book based on Star Trek.

I haven’t ready any of the Whitman TV tie-ins I own so I can’t speak to the quality of the writing or how well the books matched the tone of the shows they were based on. I’m not all that familiar with Ripcord, Ironside or The High Chaparral so I probably wouldn’t be able to tell if the characterization matched the shows. A review of the Whitman Star Trek tie-in can be found here which calls the book “well written, with few concessions to the young adult readership for whom this book was intended.”

Are there any Whitman TV tie-in collectors out there who know definitively how many titles were published?