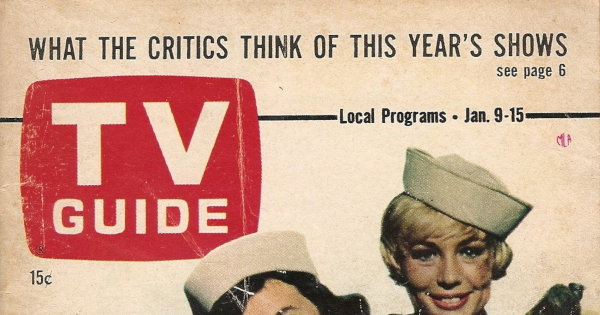 On the Cover: Kathleen Nolan and ‘Broadside’ WAVES (photo by Ron Thal).

Last week’s issue featured an article about television critics. This week’s issue included an article by Roger J. Youman surveying how those same critics reviewed the new shows introduced at the start of the 1964-1965 season. For 23 days, from Sunday, September 13th until Monday, October 5th, critics across the country watched 33 new shows. TV Guide gathered columns from 22 critics, all of whom were underwhelmed with the season as a whole. It was called “boring,” “bland,” “tedious,” “mediocre,” and “disappointing.”

Only seven shows were said to be well-reviewed. World War I was apparently unanimously praised while Slattery’s People had only a few detractors. Jack Anderson of The Miami Herald called Slattery’s People an “absorbing, taut drama” while The San Francisco Chronicle‘s Terrence O’Flaherty called it was “a first-rate effort.” But P.M. Clepper of The St. Paul Dispatch felt it was simply “talk, talk, talk” and Terry Turner of The Chicago Daily News called it “superficially slick.” Five other shows also received fairly positive reviews: The Rogues, 12 O’clock High, Flipper, Jonny Quest, and Kentucky Jones. 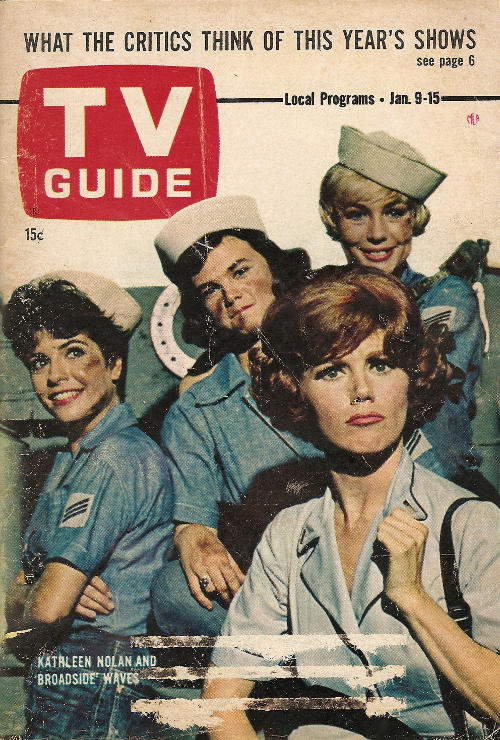 Below these top seven shows were another six that a majority of critics liked but weren’t as universally loved: Bewitched, The Bing Crosby Show, The Munsters, Gomer Pyle, U.S.M.C., The Man from U.N.C.L.E., and The Tycoon. Then there were four shows that were split right down the middle: Voyage to the Bottom of the Sea, My Living Doll, The Entertainers, and The Addams Family. The critics hated the remaining 16 shows with Gilligan’s Island easily the worst of the worst. “It is impossible that a more inept, moronic or humorless show has ever appeared on the home tube,” said Rick Du Brow of United Press International. Other shows condemned by most critics included Mickey, 90 Bristol Court, The Famous Adventures of Mr. Magoo, No Time for Sergeants, Wendy and Me, and Peyton Place.

Frustratingly for the critics, their reviews seemed to fall on deaf ears. The two shows they liked the most — World War I and Slattery’s People — viewers seemed to like the least. Peyton Place, a show the critics hated, was a huge hit with viewers. Still, some shows the critics and viewers agreed on, like Bewitched and Gomer Pyle, U.S.M.C.. Nevertheless, author concluded that television critics had it rough:

But, all in all, the ratings offer little solace to the critics. They find themselves in a most unenviable predicament. First, they have to sit through 30-odd television shows which, judging by their reactions, provide them with very little enjoyment or enlightenment. Then they have to find something intelligent to say about programs which they really don’t think are worthy of comment. Then, when they speak their minds, nobody seems to pay much attention. And, most discouraging of all, since their views don’t’ appear to carry much weight either with the public or with the men who decide what the public will see, they can look forward to more of the same next season.

(I suspect critics these days have it a little easier. They probably have access to pilots of most new shows before the new season starts and it seems as if reviews are less about criticism and more about promotion.)

Arnold Hano’s article about actress Kathy Nolan is another in a long line of TV Guide biographies that are relatively light and relatively harmless. She’s left-handed, which according to Hano means “she thinks around corners, she has a woolly eccentricity and a cussed independence.” In 1955, while appearing in Peter Pan as Wendy alongside Mary Martin, she acted like a brat when her two songs were cut, but as an adult understands that it was Mary’s show, not hers. She’s said to have matured since then but then there’s a tidbit about her Broadside co-stars complaining that she refuses to pose with them for publicity pictures, so who knows.

I probably would have gotten more out of Dwight Whitney’s article “The Seven Faces of Danny Kaye” if I didn’t keep confusing Danny Kaye with Donald O’Connor while reading it. Kaye is described as a moody workaholic not well liked by everyone he works with, particularly those guest stars he publicly criticizes. Hano worries that Kaye’s arrogance has started to seep through to audiences. His show, in its second season, has seen ratings decline. Could viewers be tiring of him? [No, it seems, because The Danny Kaye Show remained on the air through the 1966-1967 season.]

Finally, there’s a two-page article about the NFL’s pension plan, paid for by massive television revenue.

The look of the “As We See It” editorial changed with this issue. Rather than a half-page column it is now a full page with very small text. This week’s topic is Congress and the three things it needs to do to fix television:

Cleveland Amory’s review of The Twentieth Century, now in its eighth season, contains very little criticism. He explored briefly the history of the series and discussed first episode of the season, about Anne Frank. He also praised another episode about Anthony Eden, “which was one long, almost unbroken interview and which illustrated, among other things, the fact that this show doesn’t keep interrupting you to tell you what you’re seeing; it just lets you see it.”

Rounding out the national section are two picture features. One explores the unusual production of The Baileys of Balboa on CBS which was split between a studio and the actual island of Balboa. The other showcases Carol Burnett in four outfits perfect for fun at home. There is also the regular TV crossword puzzle.

There were again two news reports in the “For the Record” column in the listings section this week:

The letters page this week was all about responses to content from previous TV Guide issues. There was a lengthy letter from a reader upset about the November 28th “As We See It” editorial supporting FCC regulation of CATV, blasting TV Guide for advocating against free enterprise. Two readers wrote in to support the December 19th TV Guide article about positive portrayals of native Americans on television. There were also two letters responding to a letter in the December 19th issue about NBC’s refusal to address venereal disease in some of its programs. And there was a letter from a reader who didn’t understand Leslie Raddatz’s December 19th article about the Munstermobile. Finally, there was one letter actually about television, from a viewer praising NBC’s “The Battle of the Bulge Special” while also criticizing all the commercials.

If you were hoping for even more bowl games this week, you’re in luck. There were two more: the Senior Bowl (NBC, Saturday, January 9th at 2PM) and the NFL Pro Bowl (NBC, Sunday, January 10th at 4PM). Other sports on Saturday included a live basketball game between Boston College and St. Joseph’s on CBS at 2PM, the return of Pro Bowlers Tour on ABC at 3:30PM, and the Dade Metropolitan Handicap horse race on CBS at 5PM. Other sports on Sunday included the return of CBS Sports Spectacular at 2:30PM featuring the Harlem Globetrotters.

On Monday, NBC’s The Man from U.N.C.L.E. moved to its new 8-9PM time slot replacing two-thirds of 90 Bristol Court. WWLP (Channel 22) out of Springfield took out a half-page advertisement alerting viewers to the move: 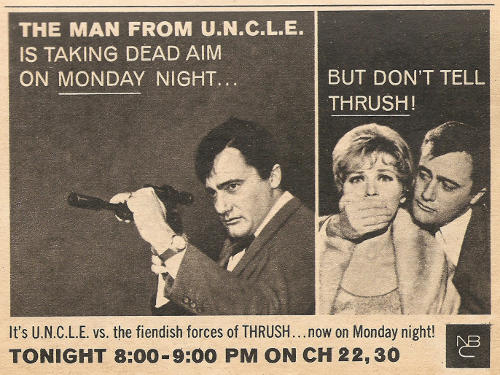 Tuesday was a big night for NBC, with the premiere of its new hour-long musical/variety series Hullabaloo at 8:30PM and a new documentary special “The Capitol: Chronicle of Freedom” from 10-11PM. Here’s a quarter-page WWLP ad for Hullabaloo: 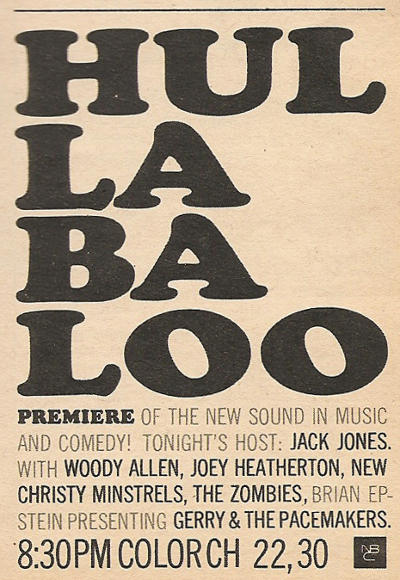 The rest of the week was relatively normal for the networks. An episode of ABC Scope on Wednesday, January 13th focused on death row inmate William Witherspoon, scheduled to be executed on February 14th. [He wasn’t and was eventually paroled.] On Friday, January 15tth NBC aired its annual Bob Hope Christmas special from 8:30-10PM.

Locally, yet another station aired “The Big Little Show,” a half-hour syndicated special raising money for the March of Dimes. WPRO-TV (Channel 12) out of Rhode Island aired it at 4:30PM on Sunday, January 10th. Also on Sunday at 11:30AM was another installment of From the College Campus on WTIC (Channel 3), featuring Yale University. And at 7PM WTIC aired a live, hour-long telecast of the Hartford Symphony from the Aetna Life Auditorium, with Arthur Winograd conducting and Sara Endich as soloist. It pre-empted Lassie and My Favorite Martian.

Several stations aired an hour-long taped Pro Hockey game between the Boston Bruins and the Toronto Maple Leafs at 1:30PM on Sunday: WHDH-TV (Channel 5), WJAR-TV (Channel 10), and WWLP (Channel 22) and its translator WRLP (Channel 32). The first two were CBS stations while the last two, out of Springfield, MA were NBC affiliates, so I’m not sure if this was a national CBS broadcast that WWLP/WRLP picked up because of the Boston Bruins. In any event, WWLP took out an ad for the game:

There were no episode descriptions this week for Dateline Boston, a local series broadcast live and in color Monday through Friday from 6-6:25PM on WHDH-TV (Channel 5). Hopefully they’ll be back in next week’s issue.