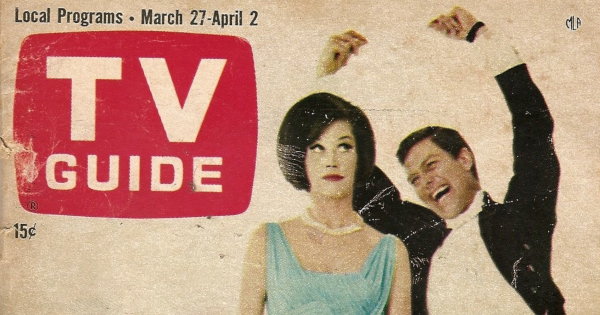 I had high hopes for one of the articles in this issue after reading the cover (“This season’s most jinxed show”) but was disappointed. It wasn’t a very detailed examination. The show in question is The Entertainers, the new Saturday night CBS musical-variety hour, and the two-page article by Neil Hickey focuses almost exclusively on Carol Burnett’s role in the show and its downfall. The series was not well received by viewers or critics when it premiered in September 1964, but producers hoped things would turn around.

Unfortunately, just as they did Carol Burnett aggravated an old injury and spent three weeks in the hospital in October, followed by another seven weeks recuperating. Caterina Valente was in Europe for most of November and December, Bob Newhart announced he was quitting once Burnett returned, and choreographer Ernie Flatt left the series. 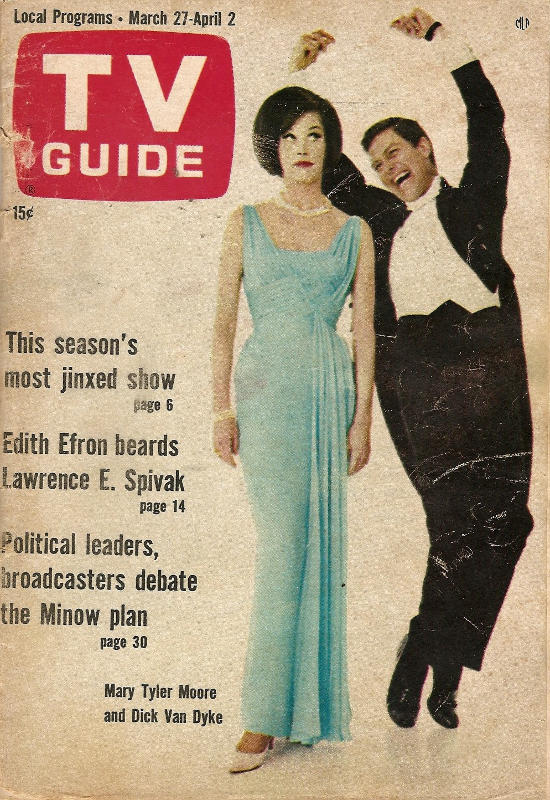 In January 1965, just as Burnett was preparing to return to The Entertainers, charges were filed against her by the producers of musical Fade Out – Fade In. She had left that production to appear in The Entertainers. By the end of the month everything had been settled and Burnett returned to the stage, balancing eight performances a week with The Entertainers. “It was the last straw for The Entertainers,” according to Hickey. “Miss Burnett’s value to the show was now diluted even further by this added drain on her professional, physical, and emotional resources.” CBS canned the series with the last broadcast scheduled for March 27th.

“This Actor Is No Oriental Uncle Tom” is a three-page profile of actor Jack Soo, with all the usual biographical details. What I found most interesting was the account of how he joined the cast of ABC’s new sitcom Valentine’s Day. Creator Hal Kanter sat down with Soo in Las Vegas. Soo told him “I’m not going to play an Oriental Uncle Tom.” Kanter insisted he read the script. “He took it,” Kanter explained, “as though it were a cobra he hoped wouldn’t bite him.” Soo read about 1/3 of the script, smiled, and agreed to take the role. What made him so happy? Seeing that his character was on equal footing with the lead, mixing drinks to be shared rather than preparing drinks for others.

I’ve never seen Meet the Press and to be honest hadn’t heard of moderator Lawrence E. Spivak before reading “Stalking the Hunter” by Edith Efron. The three-page article chronicles how Spivak evolved from a newspaper manager and publisher who railed against Communists and the FCC to a staunchly impartial (and somewhat dull) television host. “There’s really only one trouble with Lawrence Spivak’s magnificently bipartisan personality,” writes Efron. “He may win awards, his show may live forever, and he may get fan letters from both the right and left… but in a very real sense he seems to have canceled himself out. Since he became a respectable television journalist, he has ceased to exist as a vigorous individual. Yikes.

Leslie Raddatz’s cover article, “They’ve Got No Kick Coming,” isn’t really an article but snippets of conversations with the cast and creator of The Dick Van Dyke Show. Dick Van Dyke reveals that he doesn’t like the title of the show: “Its been great for me, but the name doesn’t mean much.” And he explained why the sitcom is ending: “There are just so any ideas, and we’ve used most of them already.” Mary Tyler Moore will be sad when it ends. “There has been a real camaraderie here,” she stated. “Carl Reiner is like a father, Dick a brother, and Rosie and Morey cousins.” Out of everyone, Morey Amsterdam was perhaps the most eloquent:

In fact, this show has spoiled me. There’s a rapport with other performers you don’t get as a stand-up comedian. We spend more time together than with our own families. Top actors are amazed at the way we work, we’ve worked together so long. It’s a mutual respect society–a combo–a syndicate–Laughs, Incorporated. No matter how big Dick Van Dyke gets, he’ll never even know he’s a star.

“Covering Baseball in Houston” by Melvin Durslag is a lengthy look at the new Harris County Domed Stadium in Houston, Texas. It has absolutely nothing to do with television other than the revelation that at the cost of $75,000-$90,000 for a five-year lease, deluxe boxholders have the option of watching the game on television. This is followed by two pages spotlighting actors who used to be athletes: Chuck Connors, Dennis Weaver, Jack Ging, and John Beradino.

Finally, there is a one-page profile of actress Pat Priest, who plays Marilyn on The Munsters. No mention is made of the fact that Priest was the second Marilyn, replacing Beverly Owen who left the role after the first 13 episodes. In fact, executive producer Bob Mosher makes it sound like Priest was the only Marilyn: “Ten girls tested for the part of Marilyn. We chose Pat because she had a matter-of-fact, utterly composed manner that we needed for Marilyn, who, after all, has to remain unmoved by her weird surroundings.” Perhaps he is referring to actresses who tested to replace Owen.

Cleveland Amory reviewed two shows this week: Flipper and The American Sportsman. He called NBC’s Flipper “the best new children’s show on the air, and one which is curiously engrossing, week after week, for adults.” It is all due to the presence of Flipper (real name: Suzy). Amory’s opinion of ABC’s four-part series The American Sportsman, on the other hand, is very negative: “Here the narration is inept, the fishing is boring, the bird shooting pathetic, and the ‘he-man’ exchanges embarrassing.”

There are no picture features in this issue, just the regular TV crossword puzzle.

The letters page this week includes six responses to Edith Efron’s lengthy essay examining soap operas publishing in the March 13th issue. Most were negative. One reader expressed shock that anyone would write or publish an article “dealing with the loathsome smut and degradation of the soap operas.” Another thanked Efron because she confirmed everything he had been trying to tell his wife. According to an editorial note, letters to TV Guide have been evenly split on the article.

There were also two other letters. One praised “The Abbe Lane Story” from the March 13th issue, calling it “bright, brief and to the point” and urging TV Guide to publish more like it. The other was from the manager of the Livingston Chamber of Commerce, responding to an item in the February 27th New York Teletype column about all roads to Yellowstone National Park being closed during winter. He explained that the road to the north entrance is open year-round.

It was a pretty normal week. The weekend was filled with the usual sports programs (NBC Sports in Action, Big Three Golf, Shell’s Wonderful World of Golf, and ABC World of Sports), plus live NBA Play-offs (Philadelphia 76ers vs. The Cincinnati Royals) on ABC on Sunday, March 28th at 2PM. Both Big Three Golf and Shell’s World of Golf went off the air following their broadcasts this weekend.

CBS aired the final episode of The Entertainers on Saturday, March 27th from 9-10PM. On Sunday, March 28th, CBS aired the first half of “Cavalcade of Amateurs,” a two-part look at the history of The Original Amateur Hour, from 5:30-6PM.

Three new game shows premiered on Monday, March 29th: Call My Bluff on NBC at 12PM with Bill Leyden; I’ll Bet on NBC at 12:30PM with Jack Narz; and Rebus on ABC at 1PM with Jack Linkletter.

CBS rebroadcast “Casals at 88” (originally aired in December 1964) on Monday, March 29th from 10-11PM while NBC rebroadcast an episode of The Bell Telephone Hour (originally aired in November 1964) that paid tribute to the late Oscar Hammerstein II. The final episode of The Bailey’s of Balboa aired on Thursday, April 1st from 9:30-10PM on CBS. And on Friday, April 2nd NBC broadcast the first half of “Memorandum for a Spy” starring Robert Stack as an installment of of Bob Hope Presents the Chrysler Theatre.

I forgot to mention that last week’s issue included a lengthy movie guide in the listings section, something absent in all of the issues from the Western New England Edition. Perhaps it was only published in certain editions or happened to be added that week.

Locally, it was another packed weekend. WTIC-TV (Channel 3) in Connecticut aired another installment of This Is UConn from 1-1:30PM on Saturday, March 27th. WHDH-TV (Channel 5), WNHC-TV (Channel 8), and WPRO-TV (Channel 12) all aired the East-West College All-Star Basketball Game live from Lexington, KY. Both WHDH-TV and WPRO-TV were CBS affiliates while WNHC-TV was an ABC affiliate, so I’m not sure whether this was a national CBS broadcast that WHNC-TV aired locally. Connecticut’s CBS affiliate aired a movie instead, so it’s possible that WNHC-TV picked up the game.

On Monday, March 29th WJAR-TV (Channel 10) in Rhode Island aired a 55-minute Cancer Facts Forum hosted by Jay Kroll. Later that evening, WGBH-TV aired a film about GOP politician John Grenier from 9-9:30PM. And on Friday, April 2nd, stations WBZ-TV, WHDH-TV, WTEV (Channel 6), and WNAC-TV (Channel7) all aired live coverage of the Annual Student Government Day during which Massachusetts students were sworn in to take over the state government.

There were again some really nice local advertisements in this issue: 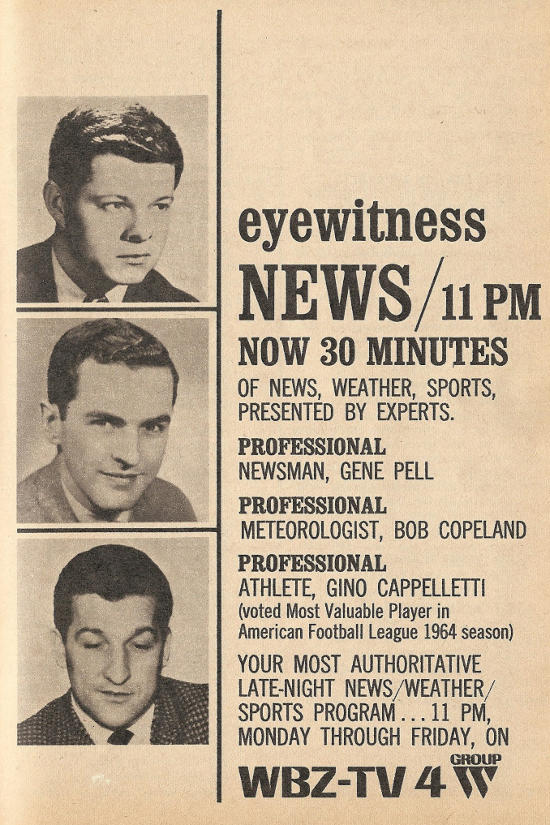 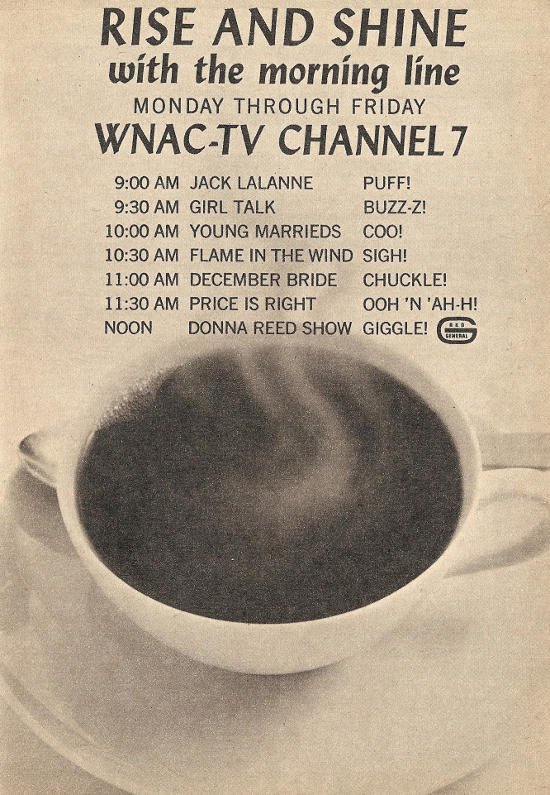 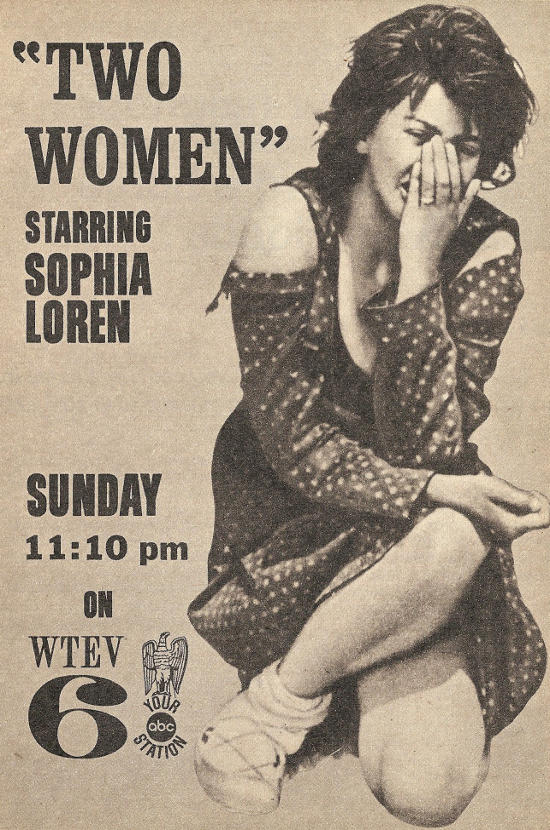