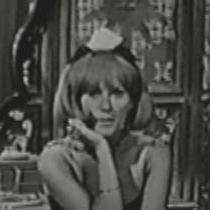 As I mention in my article about The Tammy Grimes Show–which, if you haven’t read it yet, can be found here–ABC ordered 17 episodes of the sitcom for use during the 1966-1967 season. That seems like an odd initial order but if the show had been a success, the network no doubt would’ve ordered more episodes. Instead, it was a huge failure and ABC cancelled it just before production on the 11th episode was supposed to start.

I was initially under the impression that 14 scripts were completed before the show was cancelled. That’s how many I found in a search of copyright records. However, the Special Collections Department of the University of Iowa Libraries has a large collection of 20th Century-Fox scripts that includes scripts from The Tammy Grimes Show. There are scripts for the original pilot as well as a multiple drafts of 15 different episodes.

Of the 10 episodes produced, ABC only aired four. Another two were scheduled to air before the network pulled the plug. That makes six that are known to have been produced:

“How to Steal a Girl, Even If It’s Only Me”
Written by Roland Wolpert
Aired September 15th, 1966

As I said, ABC only aired four episodes of The Tammy Grimes Show. As far as I know, the six completed episodes that weren’t broadcast by ABC have never aired anywhere in the world. The UCLA Film & Television Archive has copies of all four aired episodes as well as the episode scheduled for October 6th plus the original unaired pilot.

Most of the episodes ABC aired featured previews for upcoming episodes, including several that ultimately never aired. Here’s the preview from the September 22nd episode (“Tammy Hits Las Vegas, Or Vice Versa”):

It includes scenes from the September 29th episode (“Positively Made in Paris”) as well as the episode scheduled for October 6th (“George Washington Didn’t Sleep Here”).

Here’s the preview from the September 29th episode:

I’m not sure which episode(s) these scenes are from. They don’t appear to match the description of the episode scheduled for October 13th, which involved Tammy defending her parrot in court. That suggests they’re from one of the four other unaired episodes, perhaps “The Ski’s the Limit” (see below).

Here’s a list of titles and writers for all of the known scripts completed for The Tammy Grimes Show. Four of these were filmed, the others were never produced.

“How I Saved the Opera, or Did I?”
Written by Harry Winkler and Hannibal Coons

“Give Her Back to the Indians”
Written by George F. Slavin and Stanley Adams

“It’s in the Bag, Dad”
Written by Hal Biller

The odds of The Tammy Grimes Show ever being released on DVD or somehow finding its way to television on Me-TV or Cozi TV are infinitesimal. That means, with the exception of the single unaired episode available for viewing at the UCLA Film & Television Archive, none of the unaired episodes will likely never be seen by anyone.

8 Replies to “About Those Unaired Tammy Grimes Show Episodes”