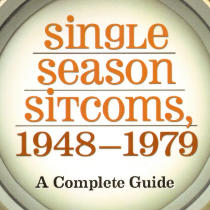 There aren’t a lot of people who are as obsessed with short-lived TV shows as I am. Bob Leszczak probably loves them even more than I do. He loves short-lived sitcoms so much that he’s written a book all about them, or at least those that premiered between 1948 and 1979. One season wonders like Accidental Family, Nancy, Fair Exchange, The Super, and The Marriage. He calls these “single season sitcoms” and his book covers more than 300 of them.

There are a few TV shows in Single Season Sitcoms, 1948-1979 that I don’t consider sitcoms. The Egg and I, for example, was a 15-minute soap opera that aired on CBS from 1951 to 1952. It was comedic but not necessarily a sitcom. Is there such a thing as a serialized sitcom? I don’t think there are many people who would call It’s a Man’s World (NBC, 1962-1963) or The Wackiest Ship in the Army (NBC, 1965-1966) sitcoms, either. Comedic dramas, perhaps, but not sitcoms. Mentioned in passing but not given its own entry is Ruthie On The Telephone (CBS, 1949) which I do consider a sitcom. 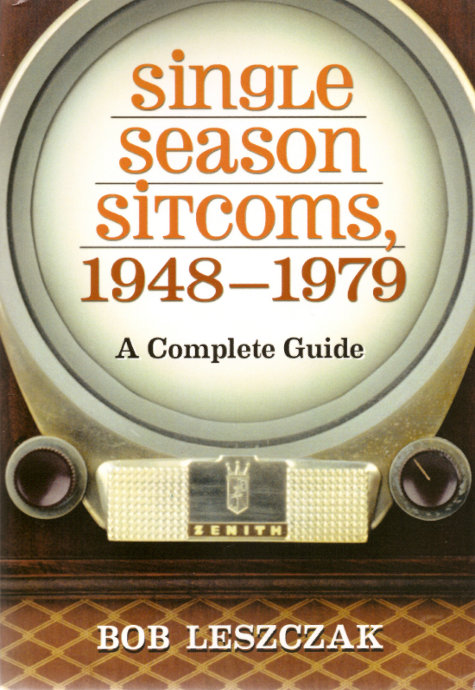 For each the nearly 300 single season sitcoms covered in the book, Leszczak provides basic information like network, production company, time slot, air dates, and number of episodes. He also notes if the show was live, filmed, taped and whether or not it had a laugh track. Next comes a summary and an overview of the characters and cast. That’s followed by a look at a handful of episodes. Finally, each entry ends with lists of producers, writers, and directors. Occasionally, Leszczak will include snippets of contemporary reviews.

There’s a lot of trivia included in some of the entries, like apartment numbers and street addresses. At times, Leszczak will mention TV shows a particular actor or producer was involved with before or after the TV show in question, which sometimes feels unnecessary. Only once or twice does he leave out what I would call important facts or information. He doesn’t mention Bruce Lee’s guest appearance on the 1968 CBS version of Blondie, for example. Nor does he discuss the six episodes of Joe and Mabel (CBS, 1956) that were filmed in 1955 but then “scrapped” when a new producer took over.

But those are the few exceptions. Otherwise, Single Season Sitcoms, 1948-1979 is a wonderful, informative book that any fan of classic TV will enjoy. Many of the entries include quotes from people who worked on the show either in front of or behind the camera. Although most of these don’t add a lot of detail about the production–often someone will speak fondly of a costar or director or reminiscence about how much fun it was on set–they add perspective and background and are invaluable.

For some shows, Leszczak also explains where episodes can be viewed (at the UCLA Film & Television Archive, for example), whether repeats were aired on cable, and if the show has been released on DVD. He also notes if no episodes are known to exist.

Single Season Sitcoms, 1948-1979 is printed in columns. Entries range in length from half a column to two full columns or one full page. Now, I’m not a fan of columns in books because it feels like an unnatural way to read, but its not really a problem here except in those few cases when a photograph is included, making a narrow column even narrower. Most of the photographs are publicity stills but there are also a few comic book covers and tickets to sitcom tapings.

It’s too bad Leszczak couldn’t include episode guides for all of these sitcoms or even just lists of episodes. That would make it even more of a complete guide. More importantly, it would allow the sometimes lengthy lists of directors and writers to be directly connected to the episodes they worked on. A list of the 14 different writers who worked on The Girl with Something Extra isn’t as useful without naming the episodes they wrote.

At the back of the book is a Sitcom Topical Index, which groups most or all of the sitcoms discussed into various lists like Addresses, Big Families, Ethnic-oriented, Firsts, Five or Fewer Aired Episodes, Gimmicks, Notable Theme Songs, and Showbiz-oriented. This index doesn’t include page numbers for easy reference but a more traditional index consisting of names and titles does.

Single Season Sitcoms, 1948-1979 may not the sot of book you read from start to finish (if you try to read it cover-to-cover you’ll probably wind up overloaded with parentheses) but it’s a welcome addition to my TV bookshelf. If you like Television Obscurities, you’re probably a fan of short-lived TV shows which means you’ll enjoy flipping through this book. Although the $45 price tag might seem high for under 250 pages, those pages are packed with details about hundreds of short-lived sitcoms. That said, if you absolutely can’t stand sitcoms, it may not be for you.

One final note: Bob Leszczak has written a follow-up to this book–Single Season Sitcoms of the 1980s: A Complete Guide–that will be published this summer (June 1st, according to Amazon).

In December 2008 I reviewed The Complete Directory to Prime Time Network and Cable TV Shows, perhaps the best television encyclopedia ever published.

In July 2009 I reviewed Total Television, another television encyclopedia.

In March 2010 I reviewed The Complete Encyclopedia of Television Programs, 1947-1976, considered the first television encyclopedia.

In October 2013 I reviewed The SCI-FI Channel Encyclopedia of TV Science Fiction, a genre-specific publication that had some issues.

Finally, in May 2014 I reviewed The Great TV Sitcom Book, which isn’t really a TV encyclopedia.