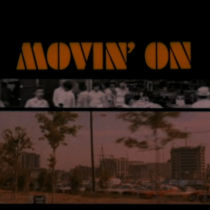 I may be exaggerating slightly with the title of this post yet to some degree it’s true. If not for Mark Rathaus, Movin’ On would never have returned to television or be available via streaming. For those not familiar with the TV series, it ran for two seasons and 44 episodes on NBC from 1974 to 1976. Claude Akins and Frank Converse starred as truck drivers Sonny Pruitt and Will Chandler. Sonny was a grizzled big rig veteran who owned the truck the pair drove and Will his younger, more educated co-driver.

A pilot telefilm titled In Tandem, created by Barry J. Weitz and Philip D’Antoni, aired in May 1974. Their company–D’Antoni/Weitz Television Productions–produced both the pilot and Movin’ On. Through the company, the two also retained ownership of the series. Decades later, that ownership would play a pivotal role in Movin’ On being resurrected.

How Movin’ On was rescued from relative obscurity makes for a fascinating story and Mark was kind enough to share some details with me.

Mark Rathaus just so happens to be Philip D’Antoni’s son-in-law. “I knew that Phil produced Movin’ On,” Mark told me in an e-mail, “but it didn’t mean anything to me until 2006 when he mentioned that he and Barry Weitz had financed the series themselves and owned the rights. I asked had he ever tried to market the shows. One of his sons had once tried to find the original elements but had failed. I asked would it be alright if I tried.”

Mark was given the green light to go ahead and try to track down the film elements. He started making phone calls. It helped that he’s a film editor and knows how to handle and work with film. “I finally found out that Fox had the elements scattered in several of their vaults. Some elements came from Hollywood and some from Kansas City. The last materials I found were the In Tandem elements, which were inventoried under a different name than Movin’ On, so were stored in a different location.”

However, collecting the original film elements was only the first step. Before he could start digitizing and remastering the episodes, Mark needed to find a distributor. That’s where Steve Rodgers of the Peter Rodgers Organization (PRO) got involved. “It was essential that Steve make a sale,” Mark explained. No sale meant no money to remaster the series. “The transfer from original negative to digital, dust-busting, color correction, subtitling, and renewing copyrights is very expensive.” Fortunately, PRO was able to make a sale and the remastering process got underway.

It took a long time to finish a set of new masters but in June 2011 Movin’ On began airing on the Retro Television Network and My Family TV (now known as The Family Channel). It was the first time the series had aired on TV in decades. The series also aired on RFD-TV at some point in 2012 or 2013. Movin’ On is no longer airing on Retro TV or RFD-TV but can still be seen every Monday at 8PM and 11PM ET on The Family Channel.

Mark and PRO didn’t stop with television. They wanted to make Movin’ On as widely available as possible. The first season was added to Hulu in May 2012 followed by the second season in September 2014. Episodes were also available via the PRO Classic TV Roku channel around the same time.

In March of this year, PRO launched its own streaming service where Movin’ On and more than a dozen other TV series can be watched commercial free for a small fee.

The episodes on Hulu look incredible but Mark isn’t entirely satisfied. “I’m extremely happy with both image and sound quality. I still see an occasional imperfection, which I hope to fix when we go to DVD.” At this point, there is no definite plan to release the series on DVD. Mark remains hopeful. “Unfortunately, DVD sales are way down from where they had been, so finding a partner to manufacture, market, and distribute DVDs has been a challenge. I do expect that eventually we will find a way to offer DVDs.”

Likewise, Mark would like to make the pilot telefilm available as well once a significant financial hurdle has been overcome. “We have the original film elements so it’s just a matter of remastering. Again, we are seeking a partner who can offer enough of an advance to allow us to begin the very expensive remastering process.”

Meanwhile, Movin’ On has an official website and Facebook page. The first piece of officially-licensed Movin’ On memorabilia in over 40 years was issued earlier this year and additional merchandise is in the works.

Expensive But Worth It

Mark is clearly passionate about Movin’ On. That’s good, because so far the project isn’t making anyone a lot of money. “To date we still have taken very little profit. Nearly every penny of our licensing fees have gone toward repaying the remastering expenses.” That doesn’t mean Movin’ On won’t eventually turn a profit. Hopefully it will, because the more successful it becomes, the more likely it is that others will be inspired to attempt similiar revivals of short-lived and relatively forgotten TV series owned by their original producer(s) or their estate(s).

Fans of Movin’ On can now enjoy the series on television and via streaming–and potentially on DVD at some point–all because Mark Rathaus had a conversation with his father-in-law. So the next time you’re talking to your in-laws, be sure to ask if they own the rights to any TV shows.

32 Replies to “Meet The Man Who Saved Movin’ On”