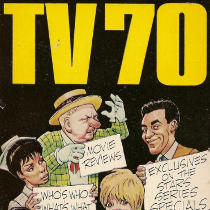 Thanks to Larry for sending me a copy of this book so I could review it here at Television Obscurities.

Dave Kaufman worked as Daily Variety‘s television editor from 1951 to 1990 (during that time he spent a few years with Triangle Publications). He also wrote two books about TV, each a comprehensive account of a single season. Signet published the first, The Only Complete Guide to TV 69, in September 1968.

Kaufman’s follow-up book, The Only Complete Guide to TV 70, came out in September 1969. As the title suggests, it aimed to provide readers with a complete guide to the 1969-1970 television season. It includes information on every new and returning network TV series as well as network movies and specials. Also covered are daytime , news and documentary, children’s, late night, syndicated, sports, and educational programs.

The book opens with a bitter introduction from Tom Smothers, who criticizes the TV industry for being too bureaucratic and failing to remain relevant:

The value system which had been imposed upon the medium did not lend itself to the creative use of tv. It was a patchwork of old values drawn from other media, and it tended to stratify the medium back to in the 1950’s. But the leadership must have thought that even if the medium was out of touch, it was at least safe. Little did they know that the monster they were building was actually worse than the one they feared.

He continues by discussing how The Smothers Brothers Comedy Hour attempted to draw young people to TV only to prove too relevant. He concludes by hoping TV will improve with the new season, something he and his brother hope every season. Kaufman clearly went to Tom Smothers for a reason. He wanted a Tom Smothers introduction and got it and he followed it with a four-page analysis of The Smothers Brothers Show censorship saga.

Only then does Kaufman turn his attention to the new TV series premiering as part of the 1969-1970 season. They’re presented in alphabetical order, beginning with The Andy Williams Show and ending with To Rome with Love. Most get a two-pages overview with several black-and-white pictures, although some get just a single page. Bracken’s World and The Survivors get four pages; Movie of the Week five. 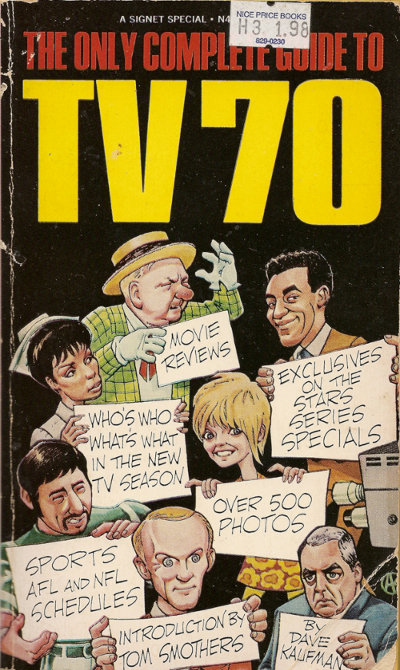 The overviews typically include a few paragraphs explaining the premise of the new TV series, with quotes from network executives, producers, or actors, followed by brief biographies of the main cast members. Kaufman devotes more than 50 pages to new TV series.

Over the years I’ve written about several new TV shows from the 1969-1970 season, including The New People, My World & Welcome to It, and To Rome, With Love. There’s not a whole lot of useful information in the overviews for these shows. However, the overview of The New People does include quotes from executive producer that I may add to my article about that show. Also, the overview discusses several episodes (complete with titles) that weren’t produced or, if they were, they ended up being significantly different than the summaries in the book. Perhaps that’s something I can write about.

The section on returning series begins with a page listing changes to shows that are coming back. For example, Tim Matheson will replace David Hartman on The Virginian, Martin Landau and Barbara Bain have left Mission Impossible, and Dick Sargent is replacing Dick York on Bewitched. Kaufman spends more than 70 pages discussing returning TV series.

The movies section features reviews by Robert Windeler. It lists movies alphabetically. Each review includes a release date for the movie, its format (color or black-and-white), and which network will air it. There are no airdates, however, likely because the networks had yet to finalize their movie schedules. They knew which movies they purchased but not when they were going to air them. It’s possible that some of the more than 120 movies reviewed in this section didn’t air during the 1969-1970 season.

Kaufman also includes a brief section discussing made-for-TV movies (World Premieres) NBC plans to air during the 1969-1970. Next is a look at the various specials each of the networks will air. NBC plans to air 100 specials (25 of which will be news specials). CBS will have perhaps 40-50 specials throughout the season while ABC intends to air just 15 specials. Some of the NBC specials include “Silver Skates,” “David Copperfield,” “Debbie Reynolds Presents the Sound of Children,” “Burlesque is Alive and Swinging in Downtown Burbank,” “Peggy Fleming at Madison Square Garden,” and “Goldilocks.” 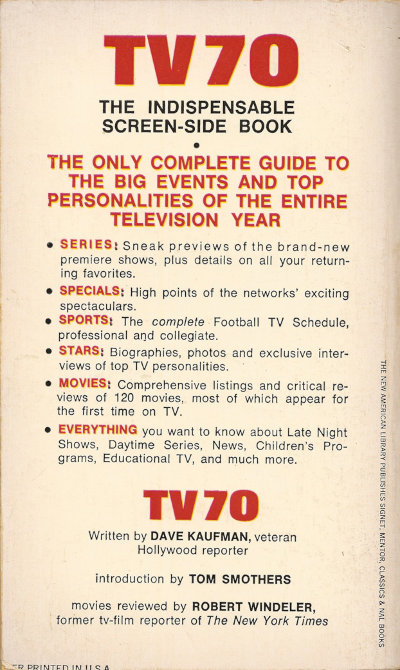 There are also two sections devoted to awards. The first features a list of winners of the 21st Annual Emmy Awards as well as winners of the Fourth Annual Critics’ Consensus Awards and the Peabody Awards. The second section covers the Tenth Annual TV Commercials Festival Awards.

Ultimately, The Only Complete Guide to TV 70 is not a particularly useful book in terms of research. With a few exceptions, most of the information contained in the book is easily found online. I don’t know how well it sold in 1969. It was the second “Only Complete Guide” from author Dave Kaufman. There was no third, which could suggest it wasn’t very successful. From the point of view of someone in 2016, it probably would be much more useful had it been published after the 1969-1970 season rather than before it. That way, it could’ve included airdates for network movies and specials, information on mid-season replacements, ratings information, and more.

Did you buy a copy of this book in 1969? Was it useful? Do you still have it? Hit the comments with your thoughts.