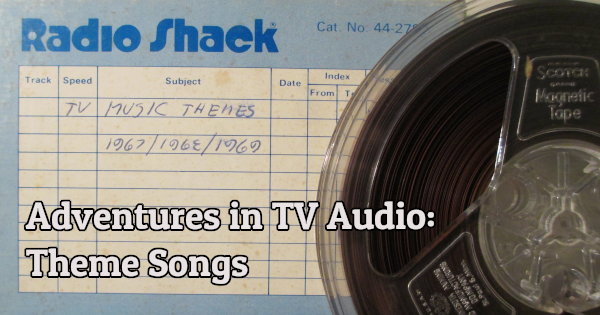 Today’s installment of Adventures in TV Audio is all about TV theme songs. I love theme songs. A lot of people do. Many theme songs are catchy. Many are instantly identifiable–even iconic. Some you can’t get out of your head. Others you never want to hear again.

One of my relatives loved television growing up and loved TV theme songs as well. He was a kid in the mid-1960s and enjoyed watching Batman, Star Trek, Gilligan’s Island, and plenty of other well-known TV shows from that era. For reasons he can no longer remember, he decided to start recording TV theme songs in 1967 or 1968 using a reel-to-reel player. He held a microphone up to the speaker instead of connecting directly to the back of the TV set, so the audio quality isn’t great. Not that I’m complaining.

My relative recorded audio on four tracks (two on each side of the tape) in order to maximize the amount of material he could fit on the tape. When the reel-to-reel tape was first transferred to cassette tape in the mid-1990s, only two of the four tracks ended up on the cassette. It was only years later that I discovered the other two tracks and more than 30 additional theme songs.

As you can see from the picture of the box, the earliest theme songs were supposedly recorded in 1967. However, this could be a mistake, something written long after the recordings were made. Initially, my relative announced which theme songs as they were recorded and provided the date. According to the voice on the tape, the “first taping” took place in January 1968. The first theme song is from The Lucy Show. The sitcom was wrapping up its sixth and final season at the time.

If any theme songs were in fact recorded in 1967, they were later recorded over. The last theme songs on the tape date from 1972.

Last year, I digitized all four tracks as best I could using an old reel-to-reel player. Here’s a January 1968 recording of The 21st Century theme song:

Here’s a March 1968 recording of the Star Trek theme song:

Here’s a 1969 recording of the theme song to The Debbie Reynolds Show:

As I said, the audio quality isn’t great. Perhaps someone with more experience and better equipment could do a better job. On the other hand, the tape itself is now 50 years old. Plus, remember the recordings were made with a microphone. They’re never going to sound pristine.

Because the themes were recording using a microphone, occasionally a cough or a voice can be heard in the background.

In total, there are 101 theme songs on the tape. Here’s a complete list:

The bulk of the theme songs are from TV shows that were in their original network runs. A handful of theme songs from TV shows in off-network syndication were recorded as well: I Love Lucy and The Munsters in 1968, Gilligan’s Island and The Dick Van Dyke Show in 1969, and The Addams Family in 1970.

I remember listening to the cassette tape with some of these theme songs on it when I was a kid. Among my favorites were The Good Life, The Men from Shiloh, and The Headmaster. I doubt many kids my age enjoyed listening to old TV theme songs. Clearly, this reel-to-reel tape played a role in fueling my passion for rare and forgotten television.

(I previously used theme songs from the reel-to-reel tape in my articles about The Good Life and The Good Guys but others have provided higher quality versions.)

For several years, the fact that two different theme songs from The New People are on the reel-to-reel tape confused me. I eventually determined one is in fact the closing theme song.

I should point out that none of the material on the reel-to-reel tape is unique. None of these shows are lost. Some of the theme songs could be considered rare, in my opinion. Rare in this case meaning not available on YouTube, which has unfortunately become a measure of for rarity. I believe Television Obscurities is the only place on the Internet where you can listen to the opening theme song from The New People, for example. The UCLA Film & Television Archive has copies of all 17 episodes and the original film elements are (hopefully) safely stored somewhere.

If you read over the list of theme songs closely, you may have noticed that I marked two of the themes as unidentified. My relative announced the name of about a third to a half of the TV show theme songs he recorded. After that, it’s just theme after theme after theme. With one or possibly two exceptions, I’ve identified all of them. It helped that the he recorded the themes chronologically.

The first unidentified theme song may not actually be unidentified. It’s supposed to be the theme to The ABC Sunday Night Movie but the announcer is cut off during the word “Sunday” and I think a portion of an entirely different theme song starts playing.

I’ve listened to this countless times trying to identify it. It also sounds very familiar. I’m sure someone is going to hear and instantly know what it is and then I’ll feel pretty dumb for not figuring it out.

Be sure to check back next week for another installment of Adventures in TV Audio. I’ll discuss a collection of reel-to-reel audio tapes from the production of The New People (ABC, 1969-1970).