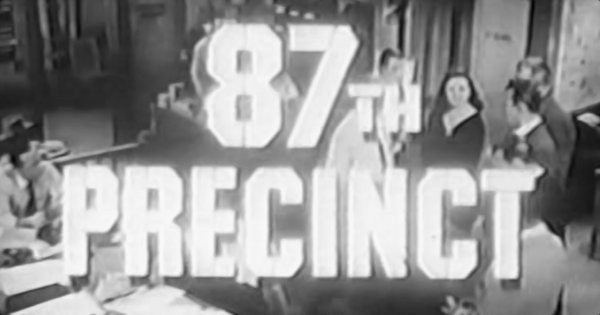 Robert Lansing starred in this NBC police drama that premiered in September 1961. Initially savaged by critics, the show improved as the season went on but that didn’t stop NBC from cancelling it after 30 episodes.

87th Precinct aired on NBC during the 1961-1962 season on Mondays from 9-10PM opposite Surfside Six on ABC and The Danny Thomas Show plus The Andy Griffith Show on CBS. The series was based on Ed McBain’s “87th Precinct” novels, the first of which was published in 1956. In 1960, a movie based on a later McBain novel was released. Titled The Pusher, it starred Robert Lansing as Detective Steve Carella, the central character from the novels.

Lansing would reprise his role in NBC’s 87th Precinct. Joining him were Ron Harper, Gregory Walcott and Norman Fell as detectives Bert Kling, Roger Havilland and Meyer Meyer. Detective Meyer had been given his repetitive name as a not-so-hilarious joke by his father. Gena Rowlands appeared in four episodes as Carella’s wife, Teddy, who was a deaf-mute.

The series premiered on Monday, September 25th, 1961 with an installment called “The Floater” in which Teddy involves herself in the case of an unidentified corpse found in a river. A mysterious tattoo on the corpse is the only clue to and it leads her to a tattoo parlor.

Cecil Smith called the premiere “pure unadulterated junk,” explaining that “there was some unmotivated idiocy about a tattoo parlor (WHY did she [Teddy] get herself tattooed?) and a brutal and completely unnecessary fist fight in a restaurant that had absolutely nothing to do with the plot–violence for the sake of violence” [1]. Jack Gould criticized the overall portrayal of Teddy:

However, instead of making the point quietly and keeping it in everyday perspective, which so easily could have been a delightful innovation in characterization, the program went the usual Hollywood route of using the absence of speech and hearing as a primary, melodramatic end in itself. The wife’s inability to communicate vocally placed her in peril when she set out to assist her husband in the pursuit of a modern Bluebeard. [2]

Lansing defended 87th Precinct in January 1962, explaining he had expected negative reaction from critics for two reasons: first, the first episode “was a bad choice for the opener” and second, critics in general seem to react poorly to new shows [3]. No direct changes were made due to the criticism, said Lansing, “except that as we go along naturally we work better together and get more style. The interesting thing is that one eastern TV editor who was one of the most critical now calls us the most improved show of the season” [4].

Indeed, Cecil Smith wrote that the January 22nd, 1962 episode “seemed to me far above the lackluster level of this police series,” that was “filled with sharp, crackling, funny dialogue and contained delightful touches” (he praised the writer of the episode, Jonathan Latimer, for the improvement) [5]. On February 13th, Aleen MacMinn reported in The Los Angeles Times that 87th Precinct was likely to return for the 1962-1963 season [6]. And on March 17th, Seymour Korman wrote in The Chicago Daily Tribune that 87th Precinct, “after a rocky start, is doing well and NBC assures the series will continue for some time” [7].

What about the 50’s? Does anybody remember “87th. Precinct”? What a great show. It would remind you of NYPD Blue – in a way.
Joe

About the success of the series, Lansing explained “we don’t solve earth shaking crimes every week. But neither does any police force. We may have a murder to tackle, but we may just as well have the case of a guy who stole some neckties” [8]. Norman Fell boasted “the techniques we use are authentic. So much so that we get letters from cops all over the country thanking us for getting the procedure right” [9].

Despite the approval of all those cops — and NBC’s assurances — 87th Precinct was cancelled in April 1962 [10]. Low ratings were the likely culprit. Preliminary Nielsen ratings for November and December indicate 87th Precinct averaged a 32 share, which tied it with The Andy Griffith Show and The Danny Thomas Show and actually beat Surfside Six, which averaged a 29 share [12].

For the 1961-1962 season as a whole, however, The Andy Griffith Show and The Danny Thomas Show ranked seventh and eighth while 87th Precinct and Surfside Six (which was also cancelled at the end of the season) were both outside the Top 30. Repeats of 87th Precinct aired throughout the summer. In September 1962, NBC replaced it with the second half of Saints & Sinners and The Price is Right.

Episodes involved Kling coming to grips with killing a criminal for the first time, one who also happened to be just 18 years old; a bride and groom receiving threatening letters; a hood who is hypnotized into thinking he’s a murderer; Carella spending his vacation applying for a security position at a bank to make more money; a stenographer who falls in love with Havilland while he’s trying to protect her; phone booth bombings that lead to robberies; a criminal who continually phones the police to confuse them while he digs a tunnel under a bank; and Meyer feeling responsible when a childhood friend, arrested for robbery, escapes under his watch.