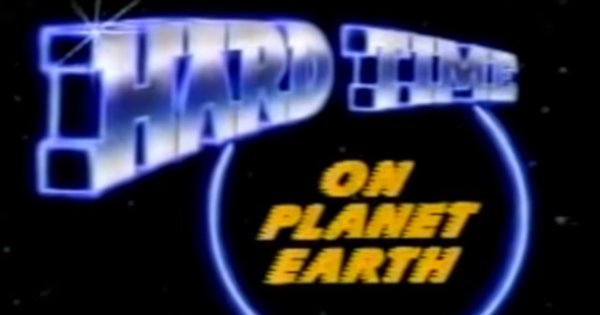 My best friend is convinced there was a show (maybe in the 80s) about 5 cowboys pulled into modern times from the 1800s by a storm or something. You ever heard of this one?
Suzanne

Your friend is correct: Outlaws followed the adventures of four bank-robbing outlaws and the sheriff chasing them in 1899 after they’re hit by lightning and somehow transported to 1986. Rod Taylor starred as Sheriff John Grail; the outlaws (Harlan, Wolf, Ice and Billy) were played by William Lucking, Charles Napier, Richard Roundtree and Patrick Houser, respectively. After getting their bearings, the five men decide their best bet is to band together than form the Double Eagle Detective Agency. Joining them was Christine Belford as Maggie Randall, a deputy sheriff who helped the five.

Outlaws premiered as a special two-hour movie on Sunday, December 28th, 1986 on CBS, an early mid-season replacement. The movie ranked third for the week with a 22.9 Nielsen rating [1]. It moved to its regular time slot on Saturday, January 3rd, 1987, ranking 17th [2]. Its ratings fell quickly after that.

The script has holes big enough to drive a buffalo through. Grail and Harlan find out that historians have mistakenly recorded the five as dying in their aborted gunfight. How do they find that out? From history books. Where do they find history books? In a library? How do 1899 relics know about 1986 libraries? They’re fast learners. How do they get the books? They check them out. Where do they get a library card? You’re on your own. [3]

Critic Marvin Kitman called Outlaws the “first psychedelic western” and wrote that it was “the most noisy and violent premiere of a series since ‘The A-Team.’ They have two jail breaks at the same time: one on horseback, the other with a school bus filled with grenades, which ends with the old exploding-school-bus fantasy [4].

CBS cancelled the show in March [5]. Counting the premiere as two hour-long episodes, a total of thirteen episodes were produced.

There was a show that came on for a brief time in 1988 or 1989 (may have been only an episode or two) I just remember this “Ball” thing following this guy around and talking to him. It was like a “robot” or something, but it was shaped like a ball and floated around in the air. Please help me here.
LeeAnn

Hard Time on Planet Earth was a mid-season replacement for CBS that premiered on Wednesday, March 1st, 1989 at 8PM. Martin Kove starred as an alien who had been banished to Earth by his people due to unspecified but presumably violent and disturbing crimes. His punishment is to be stuck on Earth until he has accomplished enough good to prove he has truly bettered himself. A special crystal he must wear at all times keeps him in his human form — with super strength — but should he lose it, he’ll die.

After landing on Earth in the buff, the alien finds a pair of overalls with the name Jesse written on them. He takes that as his name as he sets out to do his weekly good deed. Joining Jesse is Control, a floating orb charged with keeping track of his adventures. Control was voiced by Charles Fleischer in the pilot and Danny Mann in the remaining twelve episodes. The series was created by Jim and John Thomas, the brothers behind Predator.

Tom Jicha of the Sun Sentinel was savage in his review of the series:

The youngest Nielsen demographic starts at 2-year-olds. Even the slowest of developers would be too sophisticated at 24 months for Hard Time on Planet Earth. There hasn’t been a more insultingly stupid, utterly worthless series since Misfits of Science.

The casting is as off-target as everything else. Martin Kove, last seen as a third banana in Cagney & Lacey, is given the task of virtually carrying this mess alone, and it is beyond his limited range and appeal.

Undoubtedly recognizing that Kove has the charisma of a speed bump, the producers have complemented Jesse with what they must have mistakenly perceived to be a captivating sidekick, a special effects- generated, multicolored flying eyeball named Control. [6]