Great Detectives (1972). Do you have any more information on this series? It was going to be about various fictional detectives of the past. The show didn’t make, but there were three TV movies based around the characters, an Adventures of Nick Carter with Robert Conrad, Hound of the Baskervilles with Bernard Fox as Watson, and a third one with Eve Arden. The concept sounds great, and I bet the existing films are cool too!
Doug

A February 23rd, 1972 article in The Los Angeles Times explained that the concept was thought up by Frank Price of Universal Television and notes that there was never a firm commitment on the part of ABC to pick up The Great Detectives [1]. Here’s how Price described the concept:

The rotation series is much more expensive than the weekly show, but it offers the audience variation and it brings us actors we couldn’t get otherwise. Neither Rock Hudson nor Peter Falk would do a weekly series but they will do six or eight a year. This is true of Stewart Granger.

It gives us such flexibility. We have the whole field of great detectives to deal with clear back to Edgar Allan Poe. We’re not hooked to any place or any time–we get away from what we call ‘TV Time.’ which says no period works but now and the Old West. Sherlock Holmes is Victorian London; Nick Carter, 1912 America. We’ll even try Poe’s Paris, Willkie Collins’ moors… [2]

The first telefilm, The Hound of the Baskervilles, starred Stewart Granger as Sherlock Holmes and Bernard Fox as Dr. Watson. Also appearing were William Shater, Ian Ireland, Jane Merrow and Anthony Zerbe. It was not well received by critics. Don Page of The Los Angeles Times was critical of nearly every aspect of the production:

[I]t is laborious, talky, often poorly staged and suffers intermittently with show-and-tell direction. And it never captures the methodically building suspense you normally associate with Sherlock Holmes. Its one redeeming value is that Robert E. Thompson’s script is adequate–only there’s just too much of it. [3]

Robert Conrad starred in the second telefilm, The Adventures of Nick Carter, as the titular detective. Pernell Roberts, Shelley Winters, Broderick Crawford and Neville Brand rounded out the cast. The plot involved Carter attempting to track down the killer of one of his fellow private investigators in New York City circa 1912. The death somehow connects to the missing wife of a high society playboy.

The final made-for-TV movie, A Very Missing Person, saw Eve Arden playing Hildegarde Withers, with James Gregory, Ray Danton and Julie Newmar. Hildegarde’s friend in the police department asks for her help in finding an heiress (played by Skye Aubrey) who has run off with an awful lot of money. The heiress has fallen in with a bunch of hippies and cultists (played by Newmar and Robert Easton).

Kevin Thomas, also writing in The Los Angeles Times, was somewhat impressed with A Very Missing Person: “as an entity unto itself it was somewhat less than riveting but was a serviceable launching pad for a series that hopefully will take off” [4].

Why the series failed to materialize is a mystery. It could have been the ratings for the made-for-TV movies, although The Adventures of Nick Carter ranked in the Top 15 [5]. How the others fared is unknown. Maybe the stars declined to continue past their initial telefilms. Or perhaps ABC simply didn’t want an umbrella series with rotating characters.

This has been driving me crazy. There was a show that I saw maybe twice it would have been 1967 or 1968 and I live in Michigan and as I recall it was on ABC. I remember that much because my sister was home and watched it with me and that only happened on Thursday nights for some reason. It seemed the actors and actresses had British accents and one episode I recall there being something about a child who would be dressed in girls clothing and at the end of the program it was discovered the child was a boy. It was strange and I think it had a supernatural tone to it. Anyone anywhere have an answer? It would have been on late like 9 or 10 p.m.
Marilyn

Journey to the Unknown, an anthology series produced in Britain, was broadcast by ABC from September 1968 to January 1969. The October 24th, 1968 episode, titled “Miss Belle,” is the one Marilyn remembers mentioned. Here’s the summary from The Los Angeles Times:

Journey to the Unknown (often referred to as Journey into the Unknown) premiered on Thursday, September 26th, 1968, running from 9:30-10:30PM. It faced The CBS Thursday Movie and Dragnet/Dean Martin on NBC. The first episode did not do well at all, ranking 74th out of 86 programs for the week [7]. 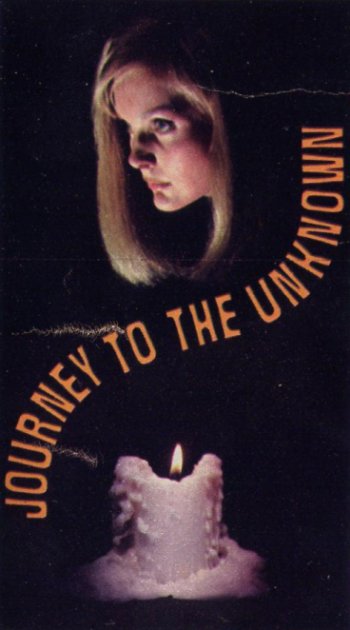 Jack Gould of The New York Times called the series an “exceptionally artistic projection of a fantasy,” while Harry Harris of The Philadelphia Inquirer referred to the series as “sick, sick, sick and slick, slick, slick” [8]. Newsweek‘s Harry F. Waters noted that the show “may be the dramatic sleeper of the season” while The Washington Post‘s Lawrence Laurent suggested it was “the journey to a short run on TV” [9]. And TIME referred to the series as the “weirdest-and most fascination excursion since Twilight Zone” [10].

Ratings did not improve and ABC cancelled Journey to the Unknown on November 13th [11]. A total of 17 episodes were broadcast. The final episode aired on January 30th, 1969.