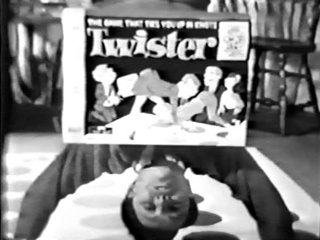 It’s unfortunate that the commercial is in black and white given that Twister is a game that involves so many bright colors. Presumably the commercial was supposed to be in color, only this comes from a black and white print. I can’t say exactly when this commercial originally aired, only that Milton Bradley first released Twister in 1966 so it must have been at some point after that.

One Reply to “1960s Twister Commercial”