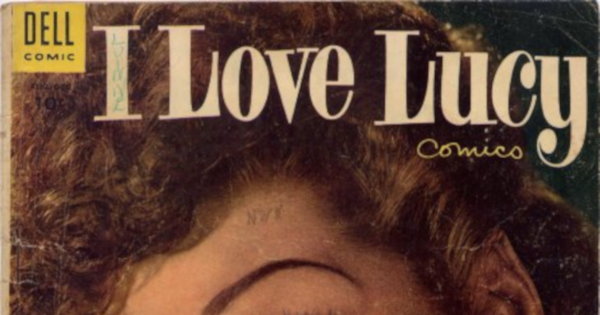 Although referred to as the third issue of Dell’s I Love Lucy comics, technically this was in fact the first issue of a standalone comic book based on the sitcom. The first two issues were actually part of Dell’s long-running Four Color series (#535, February 1954 and #559, May 1954) and were apparently popular enough for Dell to begin publishing I Love Lucy Comics, which would run for 35 issues, ending with the April-June 1962 edition. Thus, there are a total of 37 issues of I Love Lucy Comics, counting the two earlier Four Color issues. 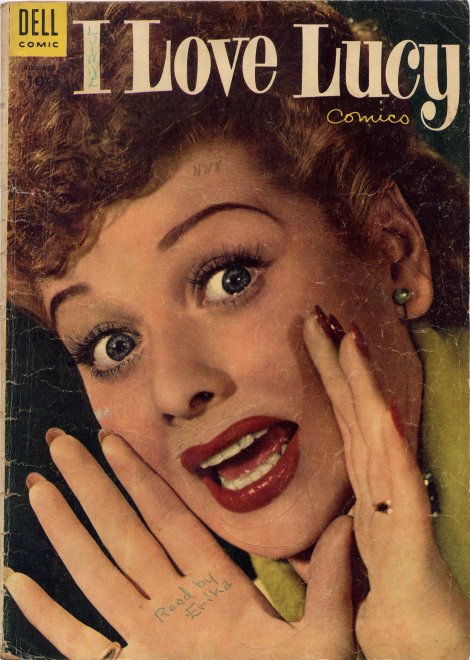 As you can see from the scan my copy of this issue is in very rough shape. In addition to all the creases and tears someone decided to draw a mustache and beard on poor Lucy. Notice that someone wrote “Read by Erika” on Lucy’s hand in pen. The name Luinne is written in pen in the I of I Love Lucy. And on Lucy’s forehead what appears to be N718 or perhaps NW8 has been written in pencil.

The issue runs for 32 pages, although the final story is continued on the inner back cover (in black and white) and on the back cover (in color). The inner front cover features five black and white photographs of Lucy and Ricky as they drive home; Ricky accidentally drives into the ocean. The first story, called “The Letter,” runs for ten pages. In it, an exasperated Ricky writes a letter of resignation to a frustrating club owner. He doesn’t intend to mail the letter unless he can’t work things out with the man. Lucy, of course, accidentally puts the letter in the mail. She tries to get it out of the mailbox with a piece of wire, but is chased off by a kid who thinks she’s a thief.

Next, she walks into the mailman as he is emptying the mailbox, then helps him gather up the envelopes in the hopes that she can grab Ricky’s letter. Unfortunately, the mailman gets to it first. She then climbs into the back of the mailman’s car but gets locked in before she can find the letter. So, she hides in one of the bags of mail, is tossed down a mail chute and nearly falls three stories onto a conveyor belt for sorting the mail. Somehow, Lucy is actually able to spot the letter on the conveyor belt but it is snatched up by a mailman who decides to deliver it himself. 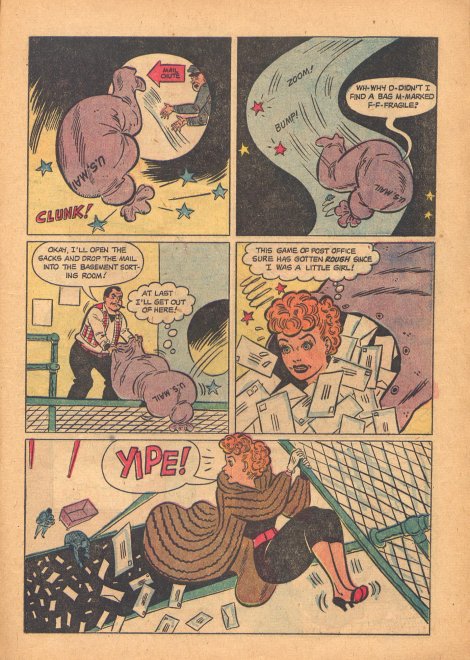 Lucy follows the man to the club owner’s house and then tries to reach through the mail slot to recover the letter. A dog bites her hand so she climbs in the window and finally recover Ricky’s letter of resignation. At home, she puts it back on the desk where Ricky left it. Moments later she notices that it is gone. Ricky, finally fed up with the club owner, has mailed the letter on his own. Ay-ay-ay!

In the next story, “Behind the Scenes,” which runs 12 pages, Fred Mertz is hard at work in the basement, trying to track down the source of a loud wailing. He eventually discovers that Lucy is the source. She’s trying to sing but, as Fred and Ethel remind her, she can’t. Ricky suddenly calls to say he won’t be home for dinner because he has to rehearse a Spanish flamenco dancer. Lucy quickly comes up with a plan: she’ll dress up as a flamenco dancer and show Ricky that she’s just as good as any professional.

Ricky soon discovers that ruse but, after seeing Lucy cry and talking with Fred, decides to let her have a part in the show. Backstage. It will be up to Lucy to push a lever forward in order to revolve the stage for the grand finale. Regrettably, Lucy decides to practice and sends a quartet of Flying Frenchmen, well, flying. Ricky is also caught up in the revolving stage and eventually manages to pull the lever back, using his head! But because Lucy still wants to be in the show, Ricky finds another job for her: guarding the door to the stage, with strict instructions to keep out a certain redhead.

The third and final story, “Photo Finish,” runs for ten pages (plus the inner back cover and the back cover). Lucy has got her hands on a camera with an incredibly bright flash, which is so powerful it knocks Ricky off the couch. There’s a candid photo contest a the Snapshot Store and the first prize is a mink coat or $1,000. Ricky wants nothing to do with the contest but Lucy has other ideas. She has Ricky tighten a light bulb in order to get a picture of him on a ladder. She takes a picture, temporarily blinding Ricky, who falls to the floor. Lucy also takes a picture of that.

It turns out Ethel has also entered the contest, so she and Lucy decide to team up and split the $1,000 prize. While buying more film they overhear the winner of the last two contests bragging about his photographic skill (Lucy: “Listen to him! I’ll bet he loves to shave himself just so he has an excuse to look in the mirror!”). They decide to follow him and take the same pictures he does. They follow him up a building’s fire escape and then to a park. While trying to take a picture from under a bride, Lucy falls over the side, with Ethel right behind her. 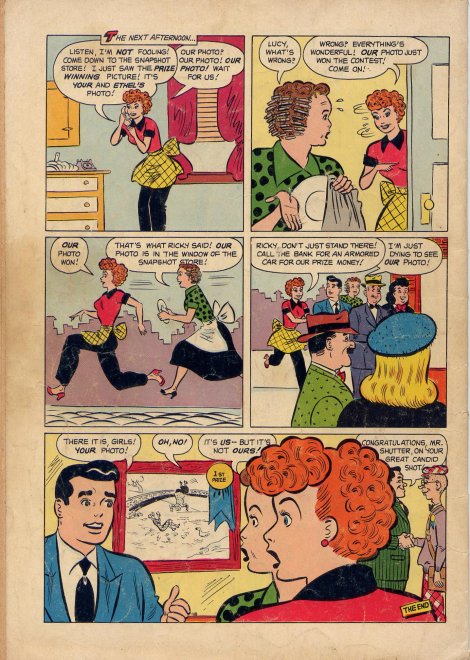 Later, after they’ve developed the film and sent in their photograph, Ricky calls to tell Lucy that her photo won the contest. It sure did: a photo of Lucy and Ethel falling off the bridge, taken by the man who won the previous two contests, has won first prize.

The artwork in this issue is quite good. It is somewhat of a cartoony style, which I feel works well with the characters and the stories. Both Lucy and Ricky are instantly recognizable; Ethel and Fred are far more generic. I wonder if Lucille Ball and Desi Arnaz gave Dell permission for their likenesses to be reproduced while Vivian Vance and William Frawley did not. Also, the comic contains at least two instances where Ricky yells out his famous “ay-ay-ay” in frustration.