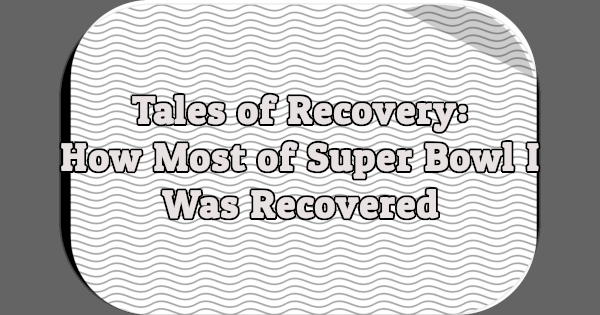 Tales of Recovery examines how specific television programs once thought missing or lost have been recovered. Often, these recoveries were not well-publicized or took place so long ago that they themselves have been forgotten.

About The First Big Game

The very first Super Bowl — officially known as the AFL-NFL World Championship Game — pitted the National Football League’s Green Bay Packers against the American Football League’s Kansas City Chiefs. It was played on Sunday, January 15th, 1967 at the Los Angeles Memorial Coliseum. It was a historic game for many reasons and television viewers had two options for watching it: both CBS and NBC broadcast the game nationally. Fans in Los Angeles were out of luck, though, because it was blacked out locally.

At some point after that, both networks either destroyed or recorded over their videotapes and for decades, Super Bowl I was missing and considered one of the holy grails of missing television. Audio of the television broadcast(s) survived, however, as did sideline footage shot by NFL Films.

Flash forward to 2005, when a man brought a pair of 2″ quadruplex videotapes to the New York City branch of the Paley Center for Media. One tape ran 94 minutes; the other 16. On the tapes was the bulk of the CBS broadcast of Super Bowl I, recorded from affiliate WDAU-TV in Scranton, PA by the man’s father, who apparently had access to videotape equipment where he worked.

Missing was the half-time show and much of the third quarter, as well as some of the commentary between plays. There was also damage to the videotapes. The Paley Center undertook a restoration of the game, using the videotapes, footage from NFL Films and audio of the CBS broadcast.

News of the recovery didn’t become public until February 2011, when The Wall Street Journal published an article about the find, which revealed there copyright issues regarding the videotapes. The NFL has claimed ownership of the broadcast itself and while the Paley Center was allowed to keep a copy of the game, it cannot show it without permission from the owner of the videotapes, who reportedly would like to sell the tapes.

Simon was also interviewed for the Sunday, February 6th, 2011 edition of The CBS Evening News. He blogged about the recovery at the Paley Center’s website; the blog post is no longer available.

For many years after news of the recovery broke in February 2011, there were few updates about the status of Super Bowl I. CNN Money ran a story in February 2015 confirming that while The Paley Center has copies of the original videotapes as well as the restoration, it cannot show them to anyone. Furthermore, the NFL and the anonymous owner of the videotapes continue to be unable to come to any sort of financial arrangement.

In January 2016, NFL Network began promoting what it called “Super Bowl I – The Lost Game,” raising hopes that the CBS game footage would finally see the light of day. Instead, the special 50th anniversary re-broadcast on January 15th consisted of NFL Films footage and audio from NBC Radio coverage. The New York Times published an article in February 2016 revealing the identity of the man who owns the tapes.

The Paley Center announced in September 2019 plans to offer public screenings of Super Bowl I, part of a special exhibit honoring the 100th season of the NFL.

To date, portions of the CBS broadcast of the game remain missing as does the entire NBC broadcast.

5 Replies to “How Most of Super Bowl I Was Recovered”