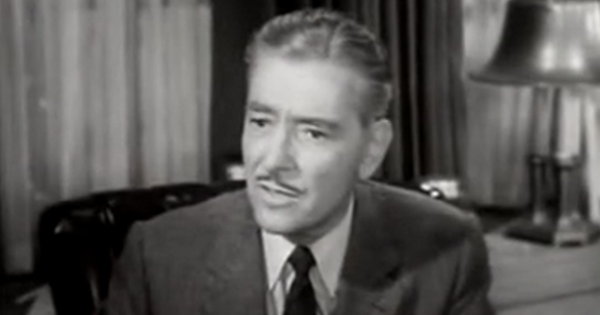 The Halls of Ivy – “The Old Professor Forgot His Umbrella”
Aired Tuesday, May 17th, 1955 on CBS
Staged and Directed by William Cameron Menzies
Teleplay by Barbara Merlin
Adapted From Original Radio Script by Barbara Merlin and Don Quinn

The Halls of Ivy began as a radio comedy airing on NBC, running from January 1950 to June 1952. Ronald Colman and Benita Hume starred as Dr. William Todhunter Hall and Victoria “Vicky” Hall, respectively. The series chronicled the trials and tribulations faced by Dr. Hall as president of the fictional Ivy College, located in the equally fictional town of Ivy (in a never specified Midwestern state). Married in real life, Colman and Hume recreated their radio roles for the small screen. Also moving from radio to TV was Herb Butterfield, who played Ivy College chairman Clarence Wellman. Mary Wickes played Alice, the Halls’ housekeeper, while Ray Collins played Professor Merriweather.

As the episode begins, Alice is hard at work at #1 Faculty Row. She assumes Dr. Hall and Mrs. Hall aren’t home, giving her time to catch up on chores. But Dr. Hall is home. He startles Alice. Moments later, Vicky returns from a shopping trip loaded with packages and boxes.

The two discuss the present Vicky purchased as an anniversary present for Wellman. Dr. Hall is impressed at how his wife can keep track of so many anniversaries and presents. Vicky points out how easily Dr. Hall recalls quotations while his secretary remembers phone numbers. She tells her husband how rough the shopping was. He should be glad she does the shopping.

Dr. Hall reveals he went shopping recently. He came across a porcelain figure he thought she’d like. Only it turns out to be a receptacle for used razor blades. He then proceeds to rant and rave about the “current trend toward gadgetry and gimcrackery.”

Their conversation is interrupted by Clarence Wellman, Ivy’s board chairman. He’s concerned because Professor Lucien Royce has returned. Dr. Hall is thrilled. He studied under Royce but hasn’t heard from him since before the war. According to Wellman, Professor Royce is a “pathetic old codger” who didn’t recognize the chairman of the board. It’s a delicate situation–Royce is likely senile and destitute–and Wellman wants Dr. Hall to deal with it.

Dr. Hall and Vicky find Professor Royce on the bench where Wellman spoke to him. Initially concerned, they soon realize he’s in full control of his faculties. Dr. Hall introduces Royce to Vicky. The two reminisce about the old days for a few minutes before Royce must leave. It’s a 15-minute walk back to his boarding house. After he leaves, Dr. Hall and Vicky realize he left his umbrella behind.

Later, Dr. Hall approaches Mr. Maypole, a librarian, with an idea. The college should publish a series of books about the history of Ivy. Maypole mistakenly assumes Dr. Hall wants him to author the books. What Dr. Hall really wants is for Professor Royce to research and write the history.

Dr. Hall next discusses his plan with Mr. John Merriweather and Vicky. Dr. Hall needs John’s help convincing the board of governors to support the proposed history of Ivy. The meeting goes his way. Dr. Hall and Vicky, with umbrella in hand, head off to tell Professor Royce the good news.

The two pause outside their house. The umbrella reminds Dr. Hall of a walk they took in the New Forest in England before they were engaged. A lengthy flashback commences, in which Dr. Hall explains how he gave away his umbrella in the hope of sharing an umbrella with Vicky.

Dr. Hall and Vicky eventually make their way to the boarding house where they run into Professor Royce on the front steps. Dr. Hall tells him about the Annals of Ivy project the board of governors has endorsed. The only problem is, Dr. Hall can’t find the right person to write the first volumes. Vicky chimes in, playing up the project for Royce. The three head off to dinner where they’ll discuss the project more.

Dr. Hall: “Good heavens, darling, you look like a safari. Where are your porters? Why didn’t you rent a camel?”
Vicky: “Oh, well, they only had one left and they told me he was already loaded.”

Dr. Hall: “Everything must be made to look like something else and then hollowed out so that it may be planted with some creeping greenery.”
Vicky: “It seems to me that I saw once–“
Dr. Hall: “Statuettes of the Venus de Milo, an electric clock stuffed into her midriff. The graceful spinning wheels of our grandmothers, tortured into magazine racks. Rare first editions, scooped up to hold cigarettes.”
Vicky: “Well, there’s no reason to get alarmed.”
Dr. Hall: “French dolls into telephones. And lamps. Now is there any conceivable piece of household junk to which some demented decorator will not attach a plaster base and a frilly shade?”

First of all, I have to confess I don’t watch many sitcoms from the 1950s. Why? To be honest, they bore me. It’s not about quality, necessarily. It’s about what I find funny. Most of the classic TV sitcoms I watched growing up were from the 1960s or 1970s. Sitcoms from the 1950s are very different. And The Halls of Ivy is barely a sitcom.

The series reportedly didn’t use a laugh track. Or if it did, not every episode featured canned laughter. This episode doesn’t. Is the reason I don’t think it’s funny because I’m used to being told when to laugh? Or is it because I don’t understand the humor?

There are several bits of dialogue I find amusing. Dr. Hall’s rant about “gadgetry and gimcrackery” is clever. There’s nothing wrong with clever. In fact, I’ve quoted it above for others to enjoy. However, there are no true laughs to be had watching “The Old Professor Forgot His Umbrella.”

I should point out that my copy of the episode doesn’t have the best audio quality. Several times I had to stop and rewatch three or four times before I could understand what was being said. Whether or not that impacted my ability to enjoy the episode is impossible to know.

Like many episodes of the TV series, this episode used a script originally written for the radio show.

According to the closing credits, Ronald Colman supervised the entire production of The Halls of Ivy.

Several sources state Roy Collins originated the role of Professor Merriweather only to be replaced at some point by James Todd. Collins appears in this episode, which aired late in the show’s run.

Despite having a large role, the actor playing Mr. Maypole isn’t credited. According to the Internet Movie Database, Maypole is played by Whit Bissell.

The Halls of Ivy is not available on any format. Check YouTube for a handful of

Did you watch The Halls of Ivy on CBS during the 1954-1955 season? Do you remember this episode? Did the sitcom ever air in syndication? Hit the comments with your thoughts.

7 Replies to “Retro Review: The Halls of Ivy – “The Old Professor Forgot His Umbrella””