CBS planned to air Alfred Hitchcock’s iconic horror movie Psycho in September 1966. Following a tragic murder just days before the scheduled broadcast, the network decided to postpone showing the movie due to concerned Midwestern affiliates. Although CBS insisted it would eventually air Psycho, which it had already edited for content, it never did.

When Psycho opened in theaters in June 1960, moviegoers were warned to show up on time because no one would be let in after the movie began. One newspaper advertisement in the New York Times quoted director Alfred Hitchcock: “The managers of the De Mille and Baronet Theaters have been instructed, at the risk of their lives, not to admit to the theatre any persons after the picture starts. Any spurious attempts to enter by side doors, fire escapes, or ventilating shafts will be met by force” [1].

According to the Chicago Daily Tribune, “Pinkerton guards at the [Woods] theater maintain a vigil so that late comers are not permitted to be seated” [2]. Hitchcock also requested that moviegoers not tell anyone about the movie after seeing it. Promotional efforts on behalf of Psycho kept the plot of the movie a secret. Seeing it in the theater would be the general public’s first experience with the thrills and chills of Hitchcock’s latest masterpiece.

Today, even those who haven’t seen Psycho are familiar with its famous shower scenes. After all, it’s been parodied countless times in movies and on television. Hitchcock is a household name and many of his movies, including Psycho, are considered classics. Less well-known is the fact that Psycho was supposed to have its television premiere in September 1966 but never did.

Val Adams of The New York Times reported on July 17th, 1966 that Psycho would be broadcast by CBS during the 1966-1967 season, calling it “the type of a movie that results in tedious toil for network censors” [3]. However, he stated that an executive at the network felt “the shower scene could be suitably sheared a bit here and there without destroying the dramatic impact” [4].

In a preview of the new fall season in The Chicago Tribune, Clay Gowran revealed that Psycho would be one of the movies aired as part of The CBS Friday Night Movies, a new movie block the network was premiering in the fall [5]. The CBS Thursday Movies had debuted the previous season. Both movie blocks ran from 9-11PM and both would open the season during the week of September 12th when CBS aired The Music Man in two parts (on Thursday, September 15th and Friday, September 16th). 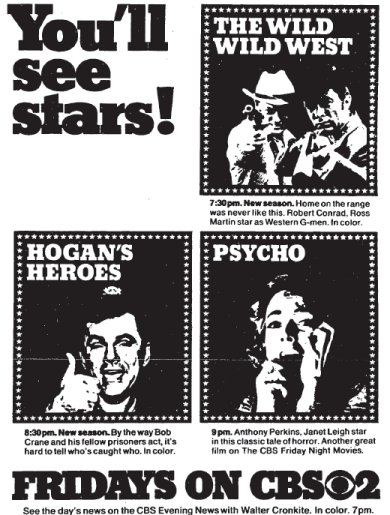 The following week, on September 23rd, The CBS Friday Night Movies would present Psycho. At least, that was the plan.

On Monday, September 19th, CBS announced it was postponing its broadcast of Psycho due to concerns raised by some of its affiliates in the Midwest regarding the appropriateness of airing the movie following the murder of 21-year-old Valerie Jeanne Percy in Chicago the day before [6]. She was killed at her family’s Chicago home in Kenilworth, Illinois on Sunday, September 18th. Her father, Charles H. Percy, was in the middle of a campaign for the United States Senate (he would go on to win and served in the Senate until 1985).

The murder, which remains unsolved, made front page news across the country and led CBS affiliates in the Midwest to suggest “the film would be unsuitable in that area” [7]. In place of Psycho, the network announced it would show Kings Go Forth, a 1958 drama set in World War II starring Frank Sinatra, Tony Curtis and Natalie Wood. CBS initially considered showing Psycho outside the Midwest but eventually decided to cancel it outright.

(Unrelated to the CBS announcement, two television stations owned by the Westinghouse Broadcasting Company — KDKA-TV in Pittsburgh and KPIX in San Francisco — announced on September 19th that they wouldn’t be showing Psycho. After viewing the edited version of the movie the previous week, which cut about nine minutes of footage, “company officials and station representatives […] found it ‘unsuitable for family viewing'” [8]. Obviously, the point became moot once CBS cancelled the broadcast.)

According to a September 21st United Press International article, “CBS executives began to have misgivings” about airing Psycho immediately after hearing about Valerie Percy’s murder [9]. Broadcasting reported in its September 26th issue that the network had screened the first half of its edited version of the movie to affiliates via closed circuit television on September 19th, after which the decision was made to postpone (the second half was scheduled to be screened on September 20th but in light of the decision having already been made, that screening may have been cancelled) [10].

Broadcasting identified WBBM-TV in Chicago, a CBS owned-and operated-station, as one of the Midwest affiliates worried about showing the movie and noted that several possible compromises were considered, including the network showing one movie in the Midwest and Psycho everywhere else or Midwest stations airing local programming [11].

Furthermore, Broadcasting noted that Psycho had been considered by CBS to be “a potential audience builder” and that “the decision to postpone the film’s showing was made as quickly as possible […] to permit the network and particularly affiliates maximum time to change their promotion” [12]. But listings in TV Guide and newspapers had already been printed and on-air promotion had begun.

In its listings, published September 18th, The New York Times described Psycho in the following manner: “Alfred Hitchcock comes at you with a club in this frankly intended bloodcurdler” [13]. The Chicago Tribune, in its movie guide published September 17th, noted that Psycho was “not for the squeamish” [14]. A full page advertisement for The CBS Thursday Movies and The CBS Friday Night Movies, run in newspapers on September 15th, included a list of movies to be shown on both nights, one of which was Psycho [15].

In his “Tower Ticker” column on October 6th, Herb Lyon noted that “CBS-TV, which shelled out a mint, will have another go at putting A. Hitchcock’s canceled, brutal ‘Psycho’ flicker on the full network” [16]. A few days later Val Adams reported that the network announced the previous week that it would eventually air Psycho but didn’t provide a date. He also revealed that because the network had spent $800,000 for the rights to show the movie twice, it was likely CBS would eventually get around to airing it two times [17].

By December, CBS had reportedly decided to start looking for a new slot on its schedule for Psycho, perhaps during the spring months [18]. Peggy Hudson, writing in The New York Times, revealed that the movie had been offered to NBC but turned down. She also gave details about the editing of the movie by CBS, which cut out nine minutes and one second, specifically the famous shower scene:

At a special screening, this viewer timed both versions of the scene in which Janet Leigh is murdered in the shower. The TV version of this grisly scene was cut by 45 seconds. The murder is still shown, but the repeated stabbings have been cut. Viewers are left with a sense of shock–but perhaps not with the sense of stark horror felt by movie audiences. [19]

Hudson also quoted William H. Tankersley, vice president of CBS, discussing the content of the movie: “To rule it out the way we’ve edited it would be to rule out any good murder mystery” [20]. According to Broadcasting, when CBS purchased the broadcast rights to Psycho, it also purchased the right to edit the movie. And from the very start there were concerns about “whether it could be edited suitably for family viewing” [21]. Editing the movie “became a major project” that was continued until all involved were satisfied; according to a CBS spokesman, “we took out the horror but kept the suspense” [22].

Despite all the money and time invested in preparing Psycho for broadcast by late December CBS had given up. Val Adams, using information from an anonymous source, reported on December 18th that the decision not to broadcast Psycho “was based on the network view that the movie was quite acceptable for theatrical use but was not all right to send to homes that tune in CBS” [23].

According to Adams, the network would try to arrange a swap so that it could exchange its rights to Psycho for a less controversial movie but might be stuck swallowing its entire $800,000 investment [24]. On January 2nd, 1967, Paul Molloy confirmed that CBS would not be showing Psycho and, based on the $800,000 price tag, wrote that “it seems in order to commend the network for its decision” [25].

Psycho eventually premiered on television in June 1967 but not on CBS. Station WABC-TV in New York City broadcast Psycho on Saturday, June 24th, 1967 as part of its “The Best of Broadway” series. It aired from 11:30-1:45PM. According to The New York Times, the famous shower scene was cut from 12 stabs to three [26].

15 Replies to “CBS and Psycho”