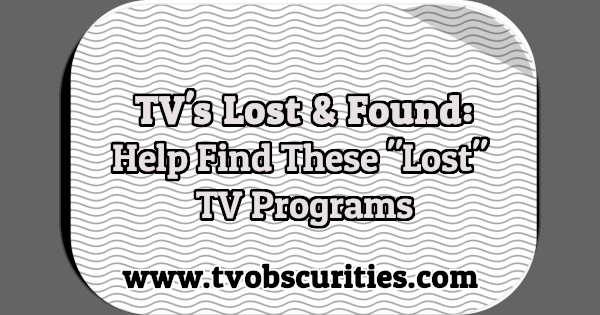 It may not be accurate to call the television programs listed below “lost” because I don’t know for sure that copies aren’t hidden away in an archive or a dusty attic somewhere. But it’s hard to prove something doesn’t exist. Whether they’re missing or truly lost, these programs are just a small sampling of what television had to offer viewers in the 1940s and 1950s. I’ve indicated whether audio recordings, photographs, or scripts for the programs do survive. Note that all episode counts are taken from television listings in The New York Times.

If you have any information about any of these programs, please contact me.

Thrills and Chills Everywhere (NBC/DuMont, 1941-1946?)
Doug Allen hosted this half-hour program, also known as Thrills and Chills, that presented “adventure” films from around the world and the explorers who made them. It aired on WNBT in New York City from 1941 to 1942 before moving to the experimental DuMont station in that city, W2XWV, where it may have remained until 1946. Read more about the program here and here.

Hour Glass (NBC, 1946-1947)
Television’s first regularly scheduled variety show, sponsored by Standard Brands. It ran for 44 episodes between May 1946 and February 1947. The Library of Congress has audio from a number of episodes, including the premiere, but no footage survives.

Mary Kay and Johnny (Dumont/NBC/CBS, 1947-1950)
This was the first network television sitcom in the United States. Approximately 150 episodes aired between November 1947 and March 1950 (from mid-June to early August 1949 it aired daily on NBC). Episodes ran for 15 minutes. The Paley Center for Media has one episode from June 1949. Photographs and scripts exist.

Girl About Town (NBC, 1948-1949)
Kyle McDonnell hosted this live musical/variety series, which aired from September 1948 to June 1949. Each of the 43 episodes ran 20 minutes. Some or all may have featured filmed segments of McDonnell at New York City nightclubs. It may also have been called The Kyle McDonnell Show or About the Town. Other regulars included Earl Wrightson and the Norman Paris Trio.

Preview (CBS, 1949)
Tex McCrary and Jinx Falkenburg hosted this half-hour program in which they were the “editors” of a “living magazine,” reporting the news, presenting musical acts and interviewing guests like Kirk Douglas, John Huston, Jackie Gleason and Harold Lloyd. A total of 31 episodes aired between March and September 1949.

Ruthie on the Telephone (CBS, 1949)
This five-minute sitcom ran six nights a week when it debuted in August 1949. CBS cut back to five nights in October and cancelled the show in November. A total of 41 episodes aired. Read more about the show here.

“Grady Everett for the People” is not lost! Read my September 2015 review of the episode.

The Margaret Arlen Program – Monday, December 4th, 1951 (WCBS-TV, New York City)
This morning talk show ran on WCBS-TV from November 1950 to April 1956. According to The New York Times, Audrey Hepburn — who was starring in Gigi at the Fulton Theatre on Broadway at the time — was Margaret Arlen’s guest on Monday, December 4th, 1951. It was likely Hepburn’s first television appearance.

Stage 7 – “The Secret Weapon of 117” (Syndicated, March 1956)
Also known as “The Secret Defense of 117” and “The Defense of 117,” this was Gene Roddenberry’s first attempt at science-fiction on television. Stage 7 was a syndicated anthology series that was repackaged as Chevron Theater on the West Coast and Don Ameche Presents the Drewry’s Play of the Week in the Midwest (read more here). Copies of the script may exist.