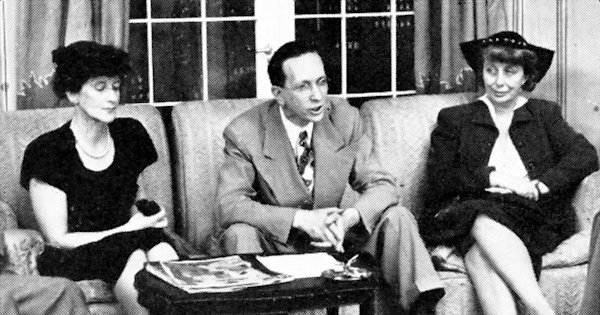 Thrills and Chills premiered in August 1941. Host Doug Allen interviewed explorers and presented films they had taken of their adventures. It remained on the air until June 1946.

Little is known about this very early television series despite the fact that it was on the air for nearly five years, first on NBC’s New York City station and later on the city’s DuMont station. Broadcast years prior to the introduction of the kinescope, there are no surviving episodes. Nor are there any audio recordings. Only a few pictures are known to exist. Even its name is a bit of a mystery. Television listings in The New York Times called it simply Thrills and Chills while other sources refer to it as Thrills and Chills Everywhere, Thrills and Chills from Everywhere, or Thrills and Chills with Doug Allan.

Thrills and Chills first appeared in television listings published in The New York Times on Wednesday, August 27th, 1941. Only two months earlier on July 1st, FCC-sanctioned commercial broadcasting in the United States began but it was very limited. Only one station in the entire country was ready to start airing commercials: NBC/RCA’s WNBT in New York City. Although Thrills and Chills originated on WNBT there is no evidence to suggest the series was sponsored.

In his 1946 book How to Write for Television, host Doug Allan explained how the series made its way to the air:

I first presented an idea which I had previously written for a book called “One Minute to Live.” Each program was to be the dramatization of some hair-raising experience of an explorer or adventurer I had interviewed on radio or for publications. Such stories would naturally take the audience in fancy to the corners of the earth, and NBC didn’t seem to have that much space in their admittedly large studios.

Tom Hutchinson, who was then program director of NBC’s television studio, told me I had a marvelous idea, but that it would take a Hollywood studio with its huge sets to produce it.

After some careful thought, I decided that since we could not present the program as a live dramatic show, the most logical alternative was to interview the explorers and adventurers about their death-defying encounters, and then fade into a showing of motion pictures which they had taken on their expeditions. [1]

The first guest on Thrills and Chills was Faustin Wirkus, a former Marine who for several years in the 1920s ruled the Haitian island of La Gonave as King Faustin II. In 1931, Wirkus wrote a book about his experience on La Gonave which he later adapted into a 1933 documentary film. It is likely that Thrills and Chills presented portions of that film. Other early guests included explorer Harold McCracken, reporter Malcolm Rosholt, “Singapore Joe” Fisher, and the “Glacier Priest” Father Hubbard. 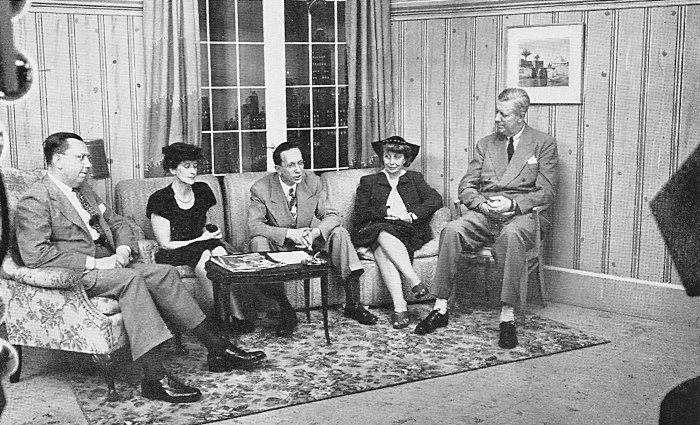 The series, Allan explained, stressed “action, excitement, odd and unusual customs, weird ceremonies, dangerous exploits, and a host of other elements” that he found by pouring through millions of feet of film, most of which didn’t meet his high standards [2]. In addition to showing footage from expeditions, Allan also discussed artifacts brought back by explorers and used maps to explain to viewers where his guests had been [3].

According to a December 1944 article in The New York Times, animals were also brought into the studio at times:

The result is sometimes pandemonium, not only before the electric eye but also in the homes of countless televiewers, as once when an agitated animal dived for the electric eye of the studio camera. On that occasion the camera man ducked and so did the televiewers. [4]

The films, too, sometimes caused problems:

[W]e showed a film of the fire-walkers of Singapore walking through hot coals in one of their native ceremonies. The film was taken at silent speed, and when shown on an ordinary screen, the natives were walking at their normal rate, but when shown on television at the stepped-up speed of thirty frames instead of sixteen frames, they appeared to be running. My guest who had taken the pictures in Singapore felt like jumping into the fire himself when he saw those fanatical natives running over the burning coals. [5]

Thrills and Chills didn’t have a set schedule. It aired weekly at times, usually on Tuesdays and Wednesdays, but occasionally there were a few weeks between episodes. Most ran 25 to 30 minutes, according to television listings, but a few were only 20 minutes long. A total of 10 episodes aired between August and December 1941. It remained on WNBT through May 1942, for the most part airing every week first on Tuesdays and later Wednesdays. It moved to Sundays for two weeks in early May. The last known WNBT broadcast took place on Sunday, May 10th.

In May 1942, due to wartime restrictions on material and personnel, the FCC issued new regulations for television stations, cutting the number of hours stations were required to be on the air per week from 15 to four. In response, WNBT dropped most of its programming. This reduction in require weekly airtime is likely why the station stopped airing Thrills and Chills.

At some point later that year, DuMont’s experimental station in New York City W2XWV (Channel 4) picked up Thrills and Chills and began airing it on Sundays. The earliest listing in The New York Times is for August 30th, just in time for the show’s first anniversary. The next listing isn’t until November 22nd and the one after that not until December 6th. Whether or not the series was only aired three times on W2XWV that year is unknown.

In January 1943, W2XWV began broadcasting Thrills and Chills every three weeks, usually from 8:30-9PM on Sundays. That schedule remained intact through July of that year at which point the series began airing once or twice a month. In March 1944, The New York Times stopped printing television listings for Sundays but Thrills and Chills remained on the air, at one point moving to Tuesdays.

The series reappeared in television listings in June 1945, this time on Thursdays. Starting in July it aired every other week. W2XWV was by this time a commercial station using the call signs WABD. As was the case when the series aired on WNBT, Thrills and Chills is not believed to have been sponsored. The series celebrated the start of its fifth year on August 30th with a special episode featuring a number of guests, among theme Frazier Hunt, Mrs. Ada Hamilton, Marshall Hall, Cyril von Bauman, and Mrs. Hetty Dyhrenfurth [6].

In September 1945, WABD signed off the air temporarily to alter its transmitter and complete new studios at the Wanamaker’s department store in New York City. The station would not return with a regular schedule until April 15th, 1946 when it dedicated the three new studios. Also back on the air was Thrills and Chills, now broadcasting from one of the largest studios. Its return was short-lived, however. After just seven episodes the series went off the air. The last known broadcast took place on Tuesday, June 4th, 1946.

Reviews of the series appeared in The Billboard twice, both times written by Marty Schrader. The first review was for the Tuesday, October 31st, 1944 episode:

It was neither thrilling nor chilling. It was, however, a fair enough way to into the films taken in China by Capt. Ray Scott, signal corps photog who spent many years covering the early phases of the Sino-Japanese war. The interview was handled well enough and Capt. Scott’s pix, while losing a great deal of their effectiveness in tele, still had much interest. Allen’s [sic] show, certainly no sensational flash of genius, was a decent vehicle for educational material on film. [8].

Schrader also reviewed the December 26th, 1944 episode less than two months later, which featured two films, one about the Bronx Zoo and the other about exploring a cave in Mexico. He was much more negative this time:

There is actually little wrong with Allen’s [sic] Thrills and Chills except that audiences tend to get rather hysterical at the sight of the interviewer wiping his brow and talking about how thrilled he is after scanning a pic showing how to buy animal feed for 5 cents in the Bronx.

Thrills and Chills is a misnomer. It should be called Yawn and Corn. [9]

It’s impossible to know just how popular the series was with viewers. The fact that it remained on the air so long suggests it was well received. Why it ultimately went off the air is unknown. Doug Allan formed a production company called Doug Allan Productions, Inc. in 1946 for the purposes of distributing adventure programs to television, theaters, and other venues. It remained active at least through 1949.

Although both WNBT and W2XWV/WABD experimented with early television relays and networks while Thrills and Chills was on the air, neither were regularly broadcasting network programs until after the series ended. It is highly unlikely that it ever aired outside of New York City.

Although no episodes of Thrills and Chills survive, the films presented on the series during its almost five years on the air might.