My latest article examines NBC’s The Americans, a short-lived drama from 1961. Darryl Hickman and Dick Davalos starred as brothers fighting on opposite sides during the Civil War. 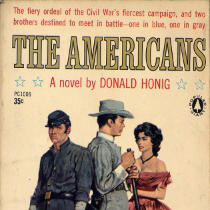 My review of The Americans, a 1961 TV tie-in novel based on the NBC TV series.

What’s the status of The Americans, the short-lived Civil War drama that aired on NBC during the 1960-1961 season?