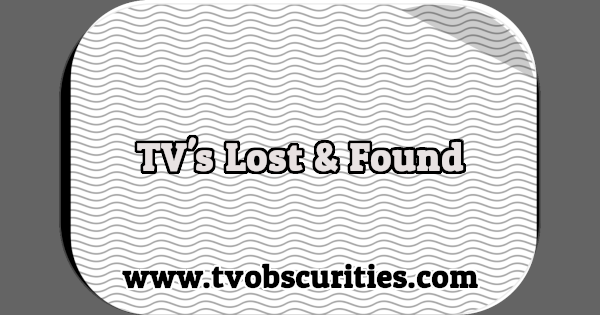 Between 1932 and 1941, Philco’s experimental TV station W3XE in Philadelphia broadcast approximately 6,000 hours of television programming that included football games, wrestling matches, and political conventions. None of these broadcasts survive. That’s 6,000 hours of lost programming from a single TV station–all broadcast prior to 1941.

Too much of our television history no longer exists. Prior to September 1947, there was no way to properly record a live television broadcast. The introduction of the kinescope recording process meant programs that aired live could be rebroadcast on TV stations across the country. Ampex unveiled the first videotape recorder, two-inch quadruplex videotape, in 1956.

Although many kinescope recordings survive today, countless others were destroyed. Videotapes were routinely erased and reused. Fortunately, some programs have been rediscovered over the years, in archives and libraries but also in the hands of private collectors. But the search for lost and missing television never ends.

Here at Television Obscurities, I’ve been researching and writing about lost and missing television for more than 15 years. I’ve compiled a number of status guides for a variety of programs, listing which episodes are known to exist. You can find them here.

Help Find These “Lost” TV Programs
A list of some of my most wanted television programs and specials. Can you help find them?

Preserving Television Audio
Many early television programs survive only as audio recordings, including several programs from the first day of commercial broadcasting in the United States. Learn more about preserving television audio.

Television Archives and Museums
A brief look at several important institutions with large collections of television programs, including the Library of Congress, The Paley Center for Media and UCLA’s Film & Television Archive.

A Forgotten Milestone: Television and Pearl Harbor
An essay examining how two TV stations in New York City reported news of the attack on Pearl Harbor on December 7th, 1941. This historic news coverage marked an important milestone for television but is lost forever.

We Need A National Television Preservation Board

As far as I know, there has been no attempt to determine how many television programs broadcast in the United States are missing or lost. It would be a staggering undertaking, covering more than eight decades of broadcasts on multiple networks by hundreds of individual stations. In October 1997, the Library of Congress published A Report on the Current State of American Television and Video Preservation.

The American television and video heritage is now at a crossroads. One direction leads toward catastrophic losses of film and videotape, with the likely exception of studio and network programs in corporate archives that can be recycled for new income. Another direction leads toward the managed preservation of extant television and video materials that bear an important relationship to American history and culture regardless of their reuse potential or monetary value. Preserving this heritage is enormously complicated by the sheer size of the American television and video industries, the explosive growth of cable broadcasting, the decentralized and fragmentary nature of broadcasting in the United States, and its competitiveness. Further, important parts of the American television heritage are already divided among public archives, libraries, historical societies, museums, universities, and a variety of other nonprofit institutions, all seeking preservation funding from limited sources.

Lost or Missing Television from the United Kingdom

For information about lost or missing television programs from the United Kingdom, check out the following resources: