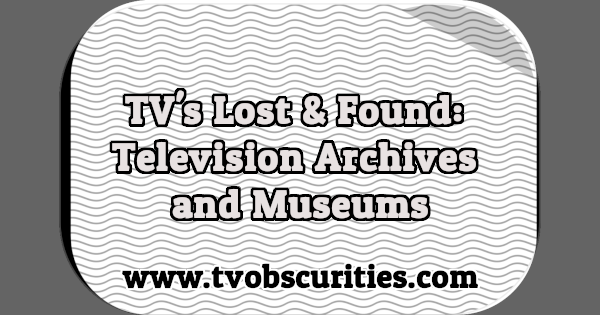 There are a handful of television archives and museums in the United States that together contain hundreds of thousands of hours of television programs. These include the Library of Congress, the Paley Center for Media, and The UCLA Film & Television Archive. Some are open to the general public while others are restricted primarily to scholars and researchers. Most have made it possible to search their collections online, although online catalogs may be incomplete. Many academic institutions hold smaller, specific collections, often pertaining to an individual or a specific television program.

What follows are descriptions for some of the larger television archives and museums.

The American Archive of Public Broadcasting

A collaboration between the Library of Congress and PBS station WGBH, the American Archive of Public Broadcasting launched in 2009. An inventory project carried out between 2010 and 2012 resulted in more than 2.5 million inventory records. Over 100,000 hours of content have been digitized and roughly 60,000 assets are accessible online.

The Library of Congress

According to the collections overview provided for television, the Library of Congress began collecting television programs in 1949 and today holds about 80,000 programs but that number may be substantially higher. Some of the more noteworthy collections held by the Library include: the NBC Television Collection, the NET Collection, and the Hubert Chain Collection. Additional information on the Library’s television holdings can be found here.

The Museum of Broadcast Communications

Founded in 1987, The Museum of Broadcast Communications has a collection of more than 85,000 hours of television and radio broadcasts dating back to the mid-1940s. Currently, only about 27,000 records are searchable online.

The Paley Center for Media