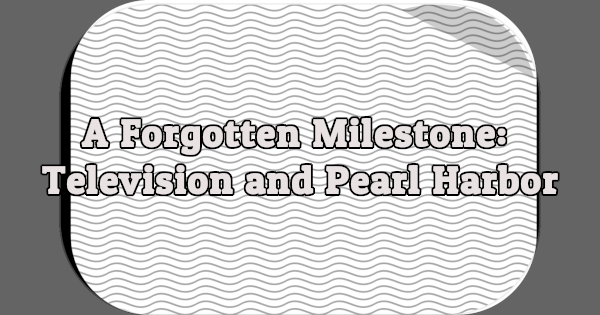 The attack on Pearl Harbor by the Japanese navy took the United States by surprise on Sunday, December 7th, 1941. It was early morning in Hawaii when the attack began and early afternoon on the East Coast. The television industry was still in its infancy. The following essay, pieced together from a variety of sources, examines how two TV stations in New York City reported news of the attack. This historic news coverage marked an important milestone for TV but is lost forever.

Commercial television got underway just six months before the attack on Pearl Harbor. Only a few thousand TV sets existed in the entire country, most of them in the New York City metropolitan area. There were only a handful of TV stations operating in 1941 in New York City, Chicago, Los Angeles, and Philadelphia. WNBT in New York City planned to air a movie during the afternoon on December 7th and a hockey game that evening.

Instead, WNBT commentators discussed the attack on Pearl Harbor. Another New York City station, WCBW, scrambled to get on the air that night to report the latest developments. In The Magic Window: American Television, 1939-1953, James Von Schilling refers to televised reports of the attack as “TV’s first bulletin” [1]. There’s no way of knowing how many viewers were watching television or turned on their sets after hearing the news. Most Americans learned about the attack from the radio.

There are no recordings of the WNBT or WCBW coverage. The kinescope process for recording live TV wasn’t introduced until 1947. While it’s technically possible one or both stations made audio recordings, none are known to exist. It seems unlikely anyone had time to think about preserving the breaking news reports. They were too busy reporting and coming to grips with the fact that the United States was going to war.

WNBT was the only TV station in New York City (and potentially the entire country) that regularly broadcast on Sundays in December 1941. Here’s what the station planned to air on December 7th, drawn from TV listing published in The New York Times:

The afternoon film was a 1940 RKO comedy called Millionaire Playboy starring Joe Penner. Reportedly, WNBT’s announcer Ray Forrest broke into the movie with news of the attack on Pearl Harbor [3].

For several months before the attack, WNBT broadcast a weekly series called Face of the War with war analyst Sam Cuff. He used maps to describe to viewers the latest events of the war in Europe. But on December 7th, Cuff showed viewers what was happening in their own country. Joining him were commentators William Hillman, H.V. Kaltenboron, John Vandercook, and Robert St. John. WNBT also brought an Associated Press Teletype machine (teleprinter) into its studios and aimed a camera at it, allowing viewers to read the latest reports as they came through [4].

How long the station remained on the air is unknown. The Boston Bruins and New York Rangers played their scheduled game. It’s unknown whether WNBT aired it. The station may have continued reporting the latest news from Pearl Harbor.

When WCBW went on the air on December 7th, it was the first time the station had ever broadcast on a Sunday [5]. Various personnel rushed to the station to prepare for a special news report. According to Broadcasting, WCBW was on the air from 8:45PM ET until after 10PM ET [6].

“There was not very much hard news that Sunday night,” recalled news writer Robert Skedgell, “so much of our report was speculative: where the Japanese fleet was, what the Japanese intentions were, where the U.S. fleet had gone, how much damage it had suffered” [8].

In 1958, CBS News published its own description of WCBW’s coverage:

During that Pearl Harbor telecast, Hubbell showed on maps the location of islands like Wake and Midway, and pointed out the possible lines of attack against the Philippines and Singapore. The viewer saw the positions, at least as they were known on that day, of Unite States Pacific Fleet units.

The program, through diagrams, arrows, and other symbols, defined news in terms of the visual. Expert analyses, again with maps as visual aids, were offered by Major General Fielding Eliot and Fletcher Pratt, while Linton Wells reported the fast-breaking political developments.” [9]

According to The Columbia History of American Television, WCBW was the only TV station in December 1941 that subscribed to the United Press radio wire [10]. Did access to the radio wire give WCBW unique information about the attacks?

The third TV station operating in New York City in December 1941 was DuMont’s experimental W2XWV. Although not scheduled to go on the air on December 7th, it’s possible that like WCBW the station signed on to report news of the attack.

Other experimental stations operating at the time included General Electric’s W2XB (Schenectady, NY), Don Lee’s W6XAO (Los Angeles), Zenith’s W9XZV (Chicago), and Balaban and Katz’s W9XBK (Chicago). There was at least one additional commercial station operating, Philco’s WPTZ in Philadelphia. No information about any Pearl Harbor programs airing on these stations has come to light.

The television industry, like the entire country, threw itself into the war effort. Production of new TV sets and broadcasting equipment was soon halted. Many technicians and other personnel joined the military. TV stations reduced the hours they were on the air and began showing civilian defense programs.

Although the actual broadcasts are lost forever, it’s important to remember the role television played in reporting news of the attack on Pearl Harbor. True, it’s little more than a footnote in the history of World War II. Radio was king in 1941 while TV was still considered a curiosity by many, still experimental in many ways. The special reports WNBT and WCBW aired on December 7th, 1941 were no doubt primitive and dry and perhaps even uninformative. The fact they aired at all is what matters.

5 Replies to “A Forgotten Milestone: Television and Pearl Harbor”