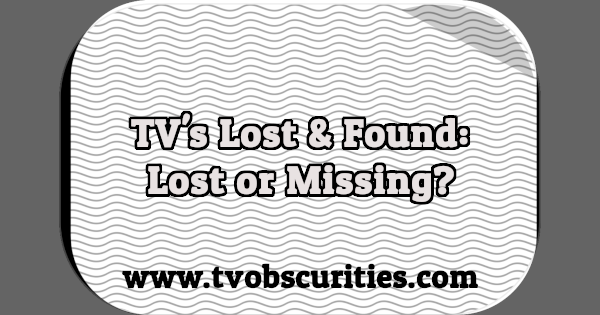 In my opinion, a distinction should be made between television programs that were never recorded at all and those that were recorded but for which no copies are known to exist. Admittedly, the terms “lost” and “missing” are in many fairly interchangeable but in my mind, to say a certain program is “lost” implies that it is gone for good. It doesn’t exist. It is lost forever. A missing program, on the other hand, may have simply been misplaced. Or forgotten somewhere. It isn’t lost but instead is waiting to be found. A third category, “unavailable,” refers to programs that are known to exist but cannot be viewed by the general public.

In September of 1947, the kinescope process was introduced in the United States, allowing for the first time live television broadcasts to be recorded on film for later reuse. At the time, the vast majority of television programs were aired live. But prior to the kinescope, the only way to record live television was to point a traditional film camera at a television screen and hope for the best. The resulting recording, however, would not be much to look at. Grainy and silent, it would also likely appear distorted due to synchronization issues between the camera and the television set.

Thus, most television programs broadcast live before September of 1947 can be considered lost by virtue of the fact that there was no way to record them. There are some exceptions, of course. The Paley Center for Media has an 11-minute excerpt of a live television program broadcast in New York City over NBC’s experimental station W2XBS on August 31st, 1939. It was filmed by an unidentified individual using the method described above and is believed to be the earliest existing television footage from the United States. Similar recordings from the late 1930s through the mid-to-late 1940s may also exist, as do audio recordings and photographs.

The advent of the kinescope meant that television programs could be recorded and then sent to other stations for rebroadcast at a later date. However, especially during the late 1940s when television was still in its infancy, there was little interest in saving kinescopes simply for posterity’s sake. Countless programs that were recorded live no longer exist because the kinescopes were destroyed once they had served their purpose. However, the simple fact that they were recorded at one point differentiates them from programs that were never recorded.

When videotape was introduced in 1956, it was also not considered a way to save television programs forever but rather a new, better method of recording programs for later use. Furthermore, videotape could be reused, meaning many programs were erased so that new programs could be taped. Keep in mind that television has always been a business. For decades, it was understood that many television programs had no repeat value: game shows, sporting events and newscasts, for example. The very first Super Bowl, broadcast on both CBS and NBC in 1967, was videotaped by both networks but no copies are known to exist today.

Most of the television programs I’ve written about aren’t commercially available, meaning they’ve never been released on VHS or DVD (or Laserdisc or Betamax, for that matter). But many do circulate among private collectors. Starting in the late 1970s when VCRs became available, television fans have been recording, saving and trading their favorite programs. Hundreds of programs that have never been commercially released were recorded either during their original broadcasts or later when they were aired in local/cable syndication.

Scattered between a variety of museums, archives, production company warehouses and random basements are hundreds of thousands of hours of television. The Library of Congress has some 80,000 individual episodes, the Paley Center for Media approximately 140,000 and UCLA’s Film & Television Archive a combined 220,000 films and television episodes. I’m sure there’s a lot of overlap between these institutions. Some percentage of the programs they hold have been made commercially available or circulate among private collectors.

Furthermore, The Paley Center for Media’s collection is open to the public at its New York City and Los Angeles locations and the Museum of Broadcast Communications has thousands of hours available on its website. Still, there is a huge number of television programs that exist but are simply unavailable to the general public. The New People, for example, has never been released commercially in any format. It isn’t lost or missing; all 17 episodes are part of the UCLA Film & Television Archive and may exist elsewhere as well. But only the pilot episode exists in the hands of private collectors.

The line between the a “lost” program and one that is “missing” is somewhat abstract. The fact that NBC’s Hour Glass is “lost” because it was broadcast in 1946 while the aforementioned Super Bowl I is simply “missing” because there are no known copies doesn’t really matter. The end result is the same: the programs can’t be watched, studied and enjoyed. However, there is one key difference: “missing” television programs can be found.

It is highly unlikely that footage from Hour Glass is ever going to surface. Could someone have pointed their camera at the television set and recorded a few minutes of grainy, silent, black and white film? Anything is possible. But television historians, archivists and enthusiasts would be better served spending their time, money and effort trying to track down “missing” programs like Super Bowl I. That’s not to say “lost” programs should be ignored; those 11 minutes of footage from 1939 at The Paley Center for Media prove that additional recordings of live television from the 1930s and 1940s may still be out there.

As for “unavailable” programs, more needs to be done to make them accessible to the general public. Unfortunately, simply digitizing collections and putting them online is not the quick and easy answer. Financial considerations and questions of copyright remain a hurdle.