Hugh O’Brian, Tony Franciosa and Doug McClure starred in this drama as agents working for World Securities, a sophisticated, technologically advanced company capable of tracking and recovering anything from anywhere for anyone. The agents were wired with tiny transmitters that connected them to Probe Control where Burgess Meredith oversaw every mission. The series ran for a single season on NBC from 1972 to 1973.

The series that would eventually become SEARCH began as an NBC World Premiere movie called Probe. Production on the telefilm, from Warner Bros. Television and Leslie Stevens Productions, began in November 1971 for an early 1972 broadcast [1]. On November 19th, 1971 Norma Lee Browning reported in her “Hollywood Today” column in The Chicago Tribune that Hugh O’Brian (who starred in The Life and Legend of Wyatt Earp from 1955 to 1961) would star in Probe [2].

In January 1972, Bob Wiedrich revealed that O’Brian would be playing “an ex-astronaut James Bond type equipped with a nickel-sized radar scanner for super sleuth work” [3]. Also appearing in Probe in a rare television role would be Sir John Gielgud as well as Burgess Meredith, Elke Sommer, Lilia Skala and Angel Tompkins. In a minor role was A Martinez, one of the winners of the 1969 Hugh O’Brian Acting Awards, held annually at UCLA.

Said O’Brian of his character: “He’s not just another cop; he’s a kind of ultra James Bond, if that’s not redundant. But he’s no Superman. What he does is not for mother and country but for bread and broads” [4]. Probe had its “world premiere” on Monday, February 21st, 1972, running from 9-11PM on NBC. The plot revolved around a set of gems stolen by the Germans during World War II. 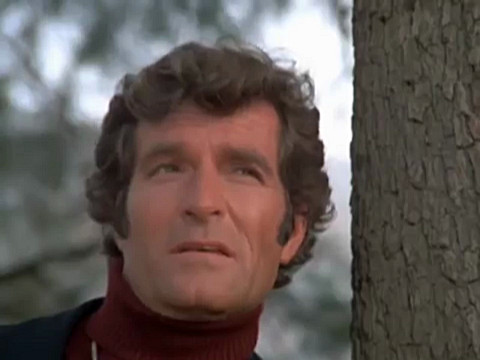 Hugh Lockwood, played by Hugh O’Brian, was charged with finding the gems. Helping him were V.C.R. Cameron (Burgess Meredith) and Gloria Harding (Angel Tompkins). Cameron was director of Probe Control, part of the Probe Division of World Securities Corporation, a global investigative service. Gloria was a specialist at Probe Control charged with tracking the health and well-being of operatives, who were known as probes.

I would like to see something on the short lived sci-fi detective series from 1972 titled SEARCH, with Hugh O’Brian (as Lockwood, a high-tech private eye, outfitted with various electronic implants) and Burgess Meredith. Though made over 30 years ago, the series did predict what can be accomplished with miniaturized electronics and world-wide communications.
Steve

Cecil Smith of The Los Angeles Times was critical of the telefilm. He criticized the script for being “so dependent on wild gimmicks that the occasional human contacts seemed false” [5]. That wasn’t all Smith had to say:

O’Brian does not feel his character is a robot but it’s about as close to a mechanical James Bond as you can get with Burgess Meredith at control directing his every move by electronic impulses. Sir John Gielgud wandered bewildered through this electronic jungle and Elke Sommer offered a bit of warm flesh to the stew. Impressive was a jealous wench at headquarters played winningly by Angel Tompkins who measured O’Brian’s blood pressure everytime he met a sexy lass, angrily reporting his reaction to the loudspeaker in his ear. [6]

The telefilm performed well enough in the Nielsen ratings and otherwise impressed NBC executives to land a spot on NBC’s “tentative” schedule for the 1972-1973 season, released in late March. It was given the 10-11PM time slot on Wednesdays following Adam-12 and The NBC Wednesday Mystery Movie [7].

After the three networks revealed their fall schedules, Clarence Petersen analyzed a variety of extremely competitive time slots where two or more programs would fight for a share of the Nielsen ratings. One such battleground was the Wednesday 10-11PM time slot between Probe on NBC, The Julie Andrews Hour on ABC (also a new show), and Cannon on CBS. Petersen suggested that the three shows would force viewers to make “some difficult choices” [8].

In a May interview with Joyce Haber of The Los Angeles Times, creator/producer Leslie Stevens explained that Probe would have three rotating stars: Hugh O’Brian, Doug McClure and Tony Franciosa. “The concept was there from the beginning. The network requested the three-star idea, which was always an alternative in the project” [9]. The plan was for O’Brian to star in about half the episodes with McClure and Franciosa trading off the remaining half.

Discussing the high tech gadgetry to be used in Probe, Stevens suggested they weren’t just make believe: “We’re applying methods used with astronauts to earthbound agents. If these devices can measure blood pressure and heartbeats and provide information more than 200,000 miles to the moon, they should be able to do the same across 3,000 miles of earth [10].

The name of the series was changed from Probe to SEARCH during in June or July 1972; The Los Angeles Times reported the new name on July 25th [11]. Later, Norma Lee Browning revealed that “a local news commentator somewhere had a program called Probe” and thus a new name was necessary [12].

The SEARCH For Viewers

NBC rebroadcast the pilot telefilm on Friday, August 4th from 8:30-10PM ET. To prepare viewers for the upcoming premiere of the weekly TV series, the network changed the name of the telefilm from Probe to SEARCH.

At the start of September, with the premiere of SEARCH just weeks away, Clarence Petersen laid out a key difference between the pilot telefilm and the TV series. In Probe, O’Brian’s character “moved around like a chess pawn, remote controlled by the brains back at Probe Control” [13]. Petersen referred to this as “a rather interesting flaw,” explaining that “a TV hero, if he is to appeal to viewers, cannot be a pawn. To have him under external control, sapped of responsibility and initiative, is to render him impotent” [14].

I would like to see something more on the TV show SEARCH (I foolishly thought that I was the only one who remembered that one).
Eric

Petersen also explained the reasoning behind NBC’s Wednesday line-up of Adam-12, The NBC Wednesday Mystery Movie and SEARCH: “NBC hopes that viewers will not be sated with mysteries after the 90-minute show preceding and that the space age gimmick–and lots of sexy girls–will keep them from switching to Cannon on CBS” [15].

SEARCH premiered on Wednesday, September 13th, 1972 with an episode titled “The Murrow Disappearances,” in which Hugh O’Brian’s character searches for a missing diplomat whose marriage may be on the rocks. Don Page of The Los Angeles Times gave the series a very negative review:

Unquestionably, there is a lot to say for Search, which arrived Wednesday night on NBC. Like contrived, ludicrous, gimmickey [sic] and dull.

Search looks like something aborted by Star Trek, taking on the appearance of the latter’s control center in comic-book posture.

In the debut, O’Brian, equipped with a television-scanner ring, hidden earphone, microphone medallion and everything but a Capt. Midnight decoder, is assigned to find a government official who is missing in a cloud of mystery.

Meanwhile, back at the mission control center, Burgess Meredith (How did HE get in here?), sticks out like Pinky Lee in his cartoonish surroundings, while directing the operations. And Angel Tompkins, glued to her TV monitor, is given a string of deadly one-liners to feed to O’Brian on the outside. [16]

Writing in The New York Times, John J. O’Connor was only slightly less negative, stating that “credibility is more ignored than strained” in the series:

Carefully wired for remote-control monitoring and wearing a ring that contains a TV camera, the heroes venture forth on their appointed rounds. A car chase, a fist fight or two, a thoroughly impressed and glamorous woman–and the formula begins to take on a depressingly familiar shape.

For all of the flash electronics, the plots are drably standard. The core of last week’s episode, as Mr. O’Brian employed his fashion-page brand of virility to subdue an international black-mailing operation, provided a rigged poker game. Tonight Mr. Franciosa goes after a hundred-dollar-bill racket that is “threatening the world’s economy.” [17]

Unlike his fellow reviewers, Clarence Petersen didn’t dwell on the negative, writing that in the premiere Hugh O’Brian’s character carried out his assignment “in less than an hour, with time out for wiseacre dialog, space-age gee-whizzery, interesting closeups of blonde Angel Tompkins at the Probe control board, and some very amusing shots of O’Brian seemingly talking to walls, tables and potted palms” [18].

The premiere episode ranked a 39th for the week, out of 65 programs, The Julie Andrews Hour tied for 34th [19]. Not a spectacular outing but not devastating either.

In the second episode of SEARCH (broadcast September 20th) Tony Franciosa’s character, Nick Bianco, made his debut. The third episode (broadcast September 27th) saw the introduction of Doug McClure’s character, C.R. Grover. Early episodes involved a missing “probe” (an agent), a stolen moon rock, a mysterious assassin and a scientist trying to defect. The Nielsen ratings, which hadn’t started off particularly high, sank. The fourth episode ranked 53rd out of 64 programs [20]; the fifth episode 49th out of 63 programs [21]. 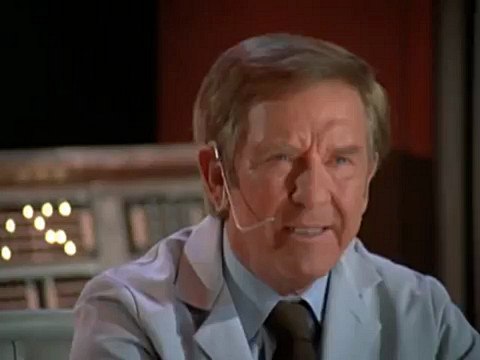 On October 1st, Bob Wiedrich reported that SEARCH would soon be dropping “some of the way-out stuff like two-way radio implants in the noggin in favor of more believable fare” [22]. According to Hugh O’Brian, the November 1st episode was “his best one yet” as well as “the beginning of ‘a new look and direction’ for the series” [23]. The new look wasn’t reflected in the ratings: the November 1st episode ranked 54th out of 66 programs [24]. The series continued to hover around that point.

I have been very impressed with information is presented on this page. I am amazed the detail are provided old television shows. With that said, I am curious to learn more information the 1972-1973 NBC series named Search starring Hugh O’Brian, Tony Franciosa, Doug McClure, and Burgess Meredith. This was an excellent show that was way ahead of it’s time. Where did this gem of a show finish in the Nielsen ratings at the end of the 1972-1973 season? Also, did show have a chance of getting renewed for the 73-74 season? Inquiring minds want to know.”
Chris

Nevertheless, NBC renewed SEARCH for the remainder of the 1972-1973 season in early November [25]. By mid-January 1973, however, NBC had soured on the series. According to Norma Lee Browning, “Warner [Bros. Television] has brought in producer Tony Spinner to see if he can save [the show]. He is revamping the format and changing the heroes from Supermen to more believable human beings” [26].

The Nielsen ratings failed to improve. On February 23rd, The Los Angeles Times called SEARCH one of the shows most likely to be canceled by NBC [27]. NBC officially unveiled its 1973-1974 schedule on April 3rd and SEARCH was not on it [28]. The final first-run episode aired on April 11th. Repeats continued to be seen through the end of August.

A limited amount of memorabilia was released while the series was on the air. Bantam published two tie-in novels in 1973, both written by Robert Weverka. The first was a novelization of the pilot telefilm Probe (confusingly, the novelization was titled SEARCH). The second was a novelization of the episode “Moonrock” featuring Hugh O’Brian. A set of View-master reels drawn from the episode “The Gold Machine” was also released. Film trims/clips cut from actual 16mm film reels were reportedly also sold.

Although SEARCH was never syndicated in the United States following its cancellation, the original pilot telefilm was. However, it aired under the name SEARCH rather than Probe. When the telefilm was released on VHS by Unicorn Video at some point in the 1980s it was called Probe.

Patient fans of SEARCH had to wait more than four decades for the opportunity to rewatch the series. Warner Archive teased them by releasing the pilot telefilm–under its original title–on DVD in May 2011. The complete series wasn’t released on DVD until February 2014.