In October 1963, author Patricia McGerr introduced spy Selena Mead in the pages of This Week. The newspaper supplement published stories starring the lovely lady spy throughout 1963 and into 1964. In November 1964, CBS announced plans for a TV show based on the stories starring Polly Bergen. But the network pulled the plug after ousting James Aubrey as president in February 1965.

Patricia “Pat” McGerr was born on December 26th, 1917 in Falls City, Nebraska and published her first novel, Pick Your Victim, in December 1946. In it, a group of Marines in the Aleutian Islands puzzle over a newspaper clipping reporting the murder of an executive with the Society to Uplift Domestic Service (or SUDS). The murderer, who has confessed, is named in the article, but the clipping is torn and the name of the victim is not revealed.

One of the Marines has a fair amount of knowledge about SUDS and tells everything he knows. The remaining Marines place bets on which executive was murdered and each explain their reasoning. Eventually, they receive a letter with a full account of the murder and the name of the victim. Thus, unlike the traditional mystery story in which the identity of the murderer is in question, McGerr’s tale takes the opposite approach and asks who the victim was.

Isaac Anderson of The New York Times called the novel “a mystery story with a unique approach” and the plot “long range detection with a vengeance, presented in an amusing manner [1]. Later novels written by McGerr included The Seven Deadly Sisters (1947), Save the Witness (1949), Death in a Million Living Rooms (1951) and The Missing Years (1953).

In addition to mysteries, McGerr also wrote biblical fiction. In 1960 her novel Martha, Martha: A Biblical Novel, about Martha of Bethany, the sister of Mary Magdalene, was published. And in 1964 another biblical work, My Brothers, Remember Monica: A Novel of the Mother of Augustine was released.

Selena Mead was McGerr’s only recurring character, appearing in some 25 short stories, many of them first seen in This Week magazine [2]. This Week was a Sunday newspaper supplement found in 43 newspapers with a circulation of 14.5 million in 1963 [3]. The short stories featured in This Week were illustrated by Austin Briggs.

On October 6th, 1963, This Week magazine published a short story by Patricia McGerr titled “Legacy of Danger.” It introduced McGerr’s heroine Selena Mead, a widow whose husband Simon — a magazine writer — had been killed only days earlier in a car crash. At least, that was the story in the papers. The truth was more sinister. Simon had been stabbed to death. And he wasn’t really a writer. He was an agent for Section Q, a top secret spy agency in Washington. 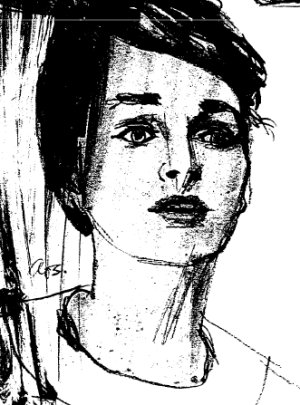 Selena had known of her husband’s double life. A life that had, throughout their eight-year marriage, taken him away from her without any real explanation. And she understood why Section Q had to pretend Simon had died in an accident. But she wasn’t prepared to learn that her neighbor and old friend, painter Hugh Pierce, was also a member of Section Q and had been Simon’s contact. And she certainly wasn’t ready to step into her late husband’s world of subterfuge and mystery.

But that’s just what she did.

Before becoming a spy, Selena Mead was a Washington socialite with connections in high places. Her father was a well-regarded politician and Selena grew up attending lavish dinners and fancy parties, conversing with foreign leaders and high-ranking officials. The very night her husband was killed the two had attended an embassy reception and Selena was given a smile and a wave by the Secretary of State.

Selena was said to have “a face that was like a classic Greek statue brought to sparkling life by a hint of joyful secrets in the deep-set dark eyes and an almost gamin smile” that even her husband’s death can’t dull; instead, “the luminosity of grief gave birth to a new, perhaps more haunting beauty” [4].

She was asked by Hugh Pierce to remember everything that happened at the reception, anything that could explain why Simon left the embassy so abruptly. She was told what her husband was investigating before he died: a leak in a Senate subcommittee pertaining to a secret military satellite. Hugh never came right out and asked her to find the leak but it was certainly implied.

After Selena successfully identified the leak, Hugh congratulated her on a job well done:

“But this job called for another quality, one that only you could supply. We needed someone who’s really in — someone who kicked sand at the Senator when she was a child. There’ll be other jobs like that.”

“This was a job that Simon left unfinished,” she resisted. “Now it’s done.”

“One small piece is cleared away,” he countered. “But the work Simon was doing is far from finished.” He cut off her attempt to speak. “Some day, it may be soon, it may be a long time away, we’ll need your special qualities. Then I’ll ask you for a yes or no.” [5]

It would be exactly three weeks before the next Selena Mead story was published by This Week (“The King Will Die Tonight!” on October 27th, 1963). In it, Selena was tasked with convincing the former king of an unnamed country not to attend the theater due to the threat of assassination (he goes anyway). In another story, Selena was asked to learn if the general of an unnamed Asian country on the brink of war with its neighbor was planning on staying in the United States for several weeks — giving Section Q time to diffuse the situation (“Question, Mr. President!”). In another, she was vacationing in London only to stumble upon a Section Q case that requires her feminine wiles to save the day (“Holiday for a Lady Spy”).

In October 1964, Steve Parker (Shirley MacLaine’s husband) was said to be negotiating with Patricia McGerr for the film and television rights to her Selena Mead stories, feeling they could make a successful film series [6]. Less than a month later, on November 6th, Val Adams of The New York Times reported that singer/actress Polly Bergen would star as Selena Mead in “what C.B.S. television calls a ‘sophisticated adventure series'” to be produced by Jack Webb [7].

The network suggested that the character “will be the ‘most glamorous secret agent since Mata Hari'” [8]. Said CBS vice president of programming Michael Dann: “We hope Miss Bergen will be able to do all the things required in the script — speak different languages, use judo technique, have total recall and handle weapons. We figure that now that she has played the President of the United States [in Kisses for My President] all other roles should be easy for her” [9].

In late November, Broadcasting reported that “Selena Mead” was one of three CBS pilots set to begin production within three weeks (the others were “My Son, the Doctor” and “The Wild West”) and one of 30 pilots the network was developing for the 1965-1966 season [10]. In late January 1965, CBS announced four shows that were “almost certain” to be part of the network’s 1965-1966 schedule, one of which was Selena Mead. The others were Coronet Blue, Country Cousins (which became Green Acres) and Tales of O’Brien (which became Trials of O’Brien) [11].

(Print advertisements for Is There a Traitor in the House?, Patricia McGerr’s first full-length Selena Mead novel, declared “COMING SOON: POLLY BERGEN stars as SELENA in an exciting new series on the CBS Network next Fall” [12].)

The Associated Press reported on February 4th that CBS was “publicly committed” to Selena Mead, Trials of O’Brien, Coronet Blue and My Three Sons (which it was picking up from ABC) [13]. A few days later, Broadcasting reported that Selena Mead had been tentatively given the 9:30-10PM time slot on Saturdays, between Trials of O’Brien and Gunsmoke [14]. A schedule published on March 1st by Broadcasting showed Selena Mead airing Mondays from 9:30-10PM and sponsored by Proctor & Gamble and General Foods [15].

On March 4th, Val Adams of The New York Times announced that CBS had dropped Selena Mead from its schedule after Polly Bergen asked the network to postpone the series so she could appear in a movie [16]. Replacing Selena Mead on Mondays would be sitcom Hazel, recently acquired from NBC. Adams noted the series had been ordered by recently fired CBS-TV president James T. Aubrey, Jr. According to United Press International, the series was dropped as part of “CBS-TV’s high-level shakeup of entertainment management” [17].

TV Guide also reported that the decision to drop Selena Mead was made as part of a larger reworking of the CBS schedule by new CBS-TV president, John A. Schneider [18]. So did The Chicago Tribune, which also revealed that Polly Bergen would be paid for 26 episodes [19].

No pilot was filmed for Selena Mead. Instead, an eight-minute “demonstration film” was produced [20]. The UCLA Film & Television Archive has a copy of this film in its collection. In addition to Polly Bergen it featured James Daly and Carroll O’Connor. It was produced by Jerome Hellman, directed by John Frankenheimer and written by Ben Madow.

The Fate of Selena Mead (the Character)

At least short stories featuring Selena Mead were published in This Week between October 1963 and June 1964. In December 1964 Doubleday published Is There a Traitor in the House?, the first and only full-length Selena Mead novel. Vivian Mort of The Chicago Tribune called it “lively, credible and likely to keep the reader in a what-happens-next mood” but criticized what she called a “Marx-brothers final scene” [21].

Anthony Boucher was less kind in his review for The New York Times, stating that “the plot is both simple and strained, with some unfortunate scenes purporting to represent adult sexual relations” [22]. An August 1966 article in The Chicago Tribune revealed that Patricia McGerr had tired of the Selena Mead character. Said McGerr, “In my own mind, I got her married and pregnant and out of the stories. She was so young, beautiful, rich, and clever, that she’d become insufferable to me” [20]. 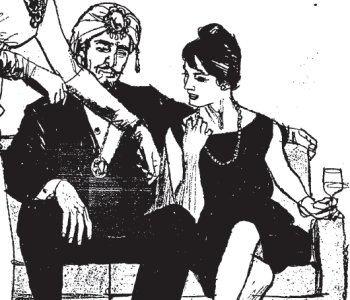 A collection of Selena Mead short stories, Legacy of Danger, was published in January 1971. The stories were loosely tied together. McGerr returned to the character in the mid-1970s, publishing at least two additional Selena Mead stories in Ellory Queen’s Mystery Magazine. Patricia McGerr died on May 11th, 1985 at the age of 67. According to her obituary in The Washington Post, she had written 17 novels and some 50 short stories, won the Ellery Queen Mystery Magazine prize in 1967 and was a member of both the Mystery Writers of America and the National Press Club [21].

The obituary also revealed that Selena Mead did eventually settle down and married Hugh Pierce.

14 Replies to “The Mysterious Case of Selena Mead”