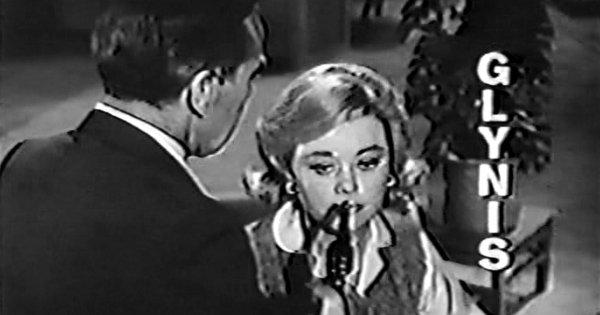 Glynis Johns starred in this CBS sitcom as a harebrained mystery writer who gets mixed up in her husband’s legal cases. It ran for 13 weeks during the 1963-1964 season.

Production on a Desilu sitcom pilot called “Careful, My Love” starring Glynis Johns and Keith Andes began in late January 1963. Jess Oppenheimer wrote the script and produced the pilot, which was directed by Sherman Marks. Oppenheimer served as producer and head writer for I Love Lucy from 1950 to 1956, which co-starred Desilu president Lucille Ball. “Careful, My Love” was one of five pilots Desilu had in contention for the 1963-1964 season (one of the others, “Trader Brown,” was the company’s first color production) [1].

In the pilot, Johns played Glynis Granville, the scatterbrained wife of attorney John Granville (played by Andes). One of his clients was accused of murdering her husband, despite the fact that the body was found in a room locked from the inside. Glynis accidentally stumbled upon a secret panel in the room and managed to solve the case. Mary Gregory, Phyllis Love, and Michael Constantine also appeared in the pilot.

CBS picked up “Careful, My Love” in late March, several weeks after it originally announced its 1963-1964 schedule [2]. It was given the Wednesday 8-8:30PM time slot after CBS Reports and before The Beverly Hillbillies. It was a late addition to the schedule because the network wasn’t sure whether or not to renew The Real McCoys. Ultimately, CBS decided to cancel The Real McCoys and gave its time slot to Careful, My Love.

By June, the series had a new name. Network title testers decided Get Lost, Glynis worked better than Careful, My Love [3]. However, the series was also referred to as The Glynis Johns Show in trade publications, suggesting CBS hadn’t yet settled on a name. The network did sign two sponsors: Ralston-Purina and R.J. Reynolds [4]. The sitcom was also given a start date. It was scheduled to premiere on Wednesday, September 25th. The sitcom’s competition in the 8:30-9PM time slot would be The Price Is Right on ABC and the final thirty minutes of The Virginian on NBC.

Glynis Johns was excited about her new series. “I look forward to it because it gives me a chance to do comedy and I’m happier when I’m doing comedy,” she told columnist Margaret McManus. “If I’m doing a sad, tragic play, I feel awful. They’re going to let me take the lines and improvise and make them funny in my own way. And some of the scripts will be written so that I can do some singing and dancing” [5].

CBS aired the pilot–calling it “Hide and Seek”–on Monday, August 5th as an installment of its Vacation Playhouse series, a summer replacement for The Lucy Show. By that time, the series had been renamed yet again, this time to simply Glynis.

According to Oppenheimer, the pilot film was intended for a late evening time slot, so it was “more sophisticated” than the resulting series [6]. Enough changes were made after the pilot was filmed that there was no way to air it as part of the series. So it was burned off during the summer. In the pilot, Glynis and John were nearly separated; the two were happily married in the series. Also, John was renamed Keith for the series. Most importantly, Glynis became a mystery writer to give her added motivation to insert herself into her husband’s cases.

Rounding out the regular cast of Glynis was George Mathews as retired police officer Chick Rogers, who managed the apartment building where Glynis and Keith lived. He also acted as something of a consultant for Glynis the mystery writer as well as Glynis the mystery-solver.

The debut episode of Glynis saw Glynis searching for clues to connect one of Keith’s clients to the disappearance of his very wealthy uncle. Critics were not impressed. Writing for the Associated Press, Cynthia Lowry suggested “the kindest thing one can do for ‘Glynis’ […] is to ignore it and hope that it will go away–quietly” [7]. The comedy, she continued, “was so broad and corny that one felt sorry for capable Glynis Johns and handsome Keith Andes” [8].

Harry Harris of The Philadelphia Inquirer was likewise charmed by Glynis Johns but the series. “Not even the indisputable appeal of its star […] can obscure the fact that CBS’ ‘Glynis’ is strictly assembly-line comedy and–despite its idiot laughtrack–not very funny” [9]. Jack Gould, reviewing all eight new CBS series, didn’t bother to give Glynis any sort of criticism other than to call it “the daughter of ‘Mr. and Mrs. North'” [10].

Advertising agency executives surveyed by Broadcasting rated Glynis high in the “unlikely to succeed” category [11]. According to the executives, the series “lacked production value, has a weak lead-in from the preceding CBS Reports and is against the strong Virginian on NBC-TV” [12].

They were right. On October 22nd, after just four episodes had aired and before the first Nielsen report for the season was released, The New York Times revealed that CBS was likely to cancel Glynis after its December 18th broadcast [13]. The network initially ordered 13 episodes, which were completed, and Desilu halted further production. Both sponsors were contracted for 13 weeks. A new series from Allen Funt was said to be the probable replacement for Glynis.

On November 11th, Broadcast reported that Glynis was officially cancelled and would not continue past its 13-week order [14]. When the first two-week Nielsen report of the 1963-1964 season was released, covering the period running September 30th to October 13th, Glynis ranked 64th with a 15.2 rating [15]. By comparison, NBC’s The Virginian ranked 19th with a 21.7 rating; The Price is Right on ABC ranked 49th with a 17.4 rating [16].

CBS did air all 13 episodes of Glynis, with the last episode airing on December 18th. The following week, the series was replaced by Allen Funt’s Tell It to the Camera. Glynis Johns only found out her series was cancelled when she received a note from Jim Aubrey, president of CBS [17]. Lack of communication characterized her entire experience on the show:

I wanted more range in my character. Most of the scripts were written with me reacting the same way to each situation. I shouldn’t have had to hang my hat on one peg.

By the time I got the scripts it was too late to discuss them with anyone. Finally I went to Lucy Ball. She’s the president, you know. She said, ‘Why didn’t you say something to me?’ And I said, ‘Well, I’m saying it now.’ But nothing happened. [18]

Episodes of Glynis saw Glynis getting into all sorts of trouble. She visited a women’s prison to gather material for a story only to wind up behind bars herself. She worked as a taxi dancer to gain insight for a story only to find herself targeted by a killer. She plotted the perfect crime with a fellow writer, not realizing he wasn’t a writer and just wanted to get away with murdering his wife. She let three ex-convicts move in with her and Keith, convinced she could rehabilitate them. She threw a party for Keith and hired a bodyguard to protect him from a gang hit, then become convinced every guest was the killer. And she posed as a killer-for-hire in order to save the life of Keith’s client: a cat named Emily.

During the summer of 1965, CBS aired repeats of Glynis from July 19th through September 6th as a replacement for The Lucy Show on Mondays. Although the show never aired in syndication in the United States, Desilu Sales sold offered it in syndication internationally.