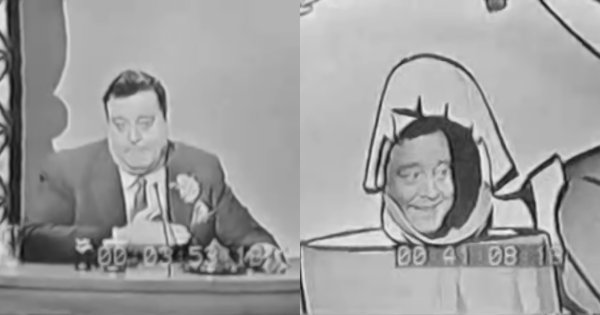 Reports surfaced in December 1960 that Jackie Gleason planned to return to television as host of a new half-hour game show on CBS called You’re in the Picture [1]. It was a replacement for The Garland Touch and would premiere on Friday, January 20th, 1961 in the 9:30-10PM time slot. The sponsors of The Garland Touch–the Plymouth division of Chrysler Corp. and the Ligett & Myers Tobacco Company–planned to continue to sponsor the new series on an alternate-week basis.

The show would feature a celebrity panel attempting to guess the identity of cartoons. Gleason planned to begin taping episodes during the first week of January 1961. However, just eight days before it was scheduled to debut, the celebrity panel for the series had yet to be finalized. “We’re trying to pick the greatest and most attractive people,” Gleason explained. “We have so many people who want to do the show and so many attractive people, it’s a tough decision to make” [2].

Here’s how Gleason explained the series to Cecil Smith of The Los Angeles Times:

Well, we got this set, a beautiful set and functional. A set like a picture frame with the panel in it. We’re lining up all stars for this panel—we hope. We’re trying to get Raymond Massey, Bea Lillie, Jonathan Winters and–what’s the name of that great dame? — yeah, Lauren Bacall. How’s that for a panel?

They’re in this picture frame and we fly in a picture with cutouts for their heads. The picture is something ludicrous–only they can’t see it. But they’re supposed to identify it. I feed ’em little clues. It’s for laughs. [3]

A run-through for the first episode took place on Saturday, January 14th, 1961, with Pat Carroll and Arthur Treacher, two panelists Gleason had signed off on. Just two days later, on January 16th, producer Steve Carlin couldn’t say what the final panel would look like or whether Carroll and Treacher would be part of it [4]. It wasn’t until January 19th that CBS announced the panel would consist of Carroll, Treacher, Jan Sterling and Keenan Wynn [5].

When You’re in the Picture premiered the following day, however, Wynn wasn’t on the panel. Instead, Pat Harrington, Jr. was the fourth panelist. One other change was made prior to the premiere: Plymouth/Chrysler dropped out as an alternate sponsor and was replaced by the Kellogg Company.

The debut episode was not well received. Cecil Smith called it “an insult to the audience” [6]. Vernon Scott of United Press International criticized nearly every aspect of the production, from the structure of the panel to the lack of discipline displayed by the panelists. And “even Gleason looked disappointed with himself as the half hour drew to a close” [7].

According to Vernon, Jackie Gleason “is not a stand-up comic who fractures audiences with jokes, nor is he the relaxed, folksy-type moderator epitomized by Garry Moore. He must play a character in a well-developed sketch. When Jackie is simply Gleason it is the only time he can be called a lightweight” [8].

Gleason was determined to return the following week live with some sort of speech about what had happened the previous week. He wasn’t sure if CBS would let him. “All I can say is that I hope to be on. There will be just fireworks. Of course, if I get on, there’s no telling if I’ll be allowed to stay on…” [9].

He did get on and he stayed on the air live for an entire half-hour on Friday, January 27th. Gleason sat in front of the studio audience on a bare stage and apologized to viewers in an unprecedented half-hour broadcast:

Ladies and gentlemen, I think you’ll notice that there is no panel tonight. As a matter of fact there’s nothing here except the orchestra and myself. I’d like to modify that: there is one other thing. We have a creed tonight and the creed is honesty is the best policy. And the premise is this.

Last week we did a show called “You’re in the Picture” that laid without a doubt the biggest bomb in history. I’m telling you, friends, that I’ve seen bombs in my day. This would make the H-bomb look like a two-inch salute.

Critics were impressed with the apology. Cecil Smith called it “the most delightful show on television in the last few weeks” [10]. “With only a bare stage and a chair,” Vernon Scott raved, “Jackie proved himself the most unique character video has yet produced. No one else has summoned the courage to talk directly to viewers blasting himself with the cruelest of barbs about a show which he termed ‘a great flop'” [11].

The Kellogg Company wasn’t happy with the apology, however. The sponsor complained to CBS after the January 27th broadcast and insisted that Gleason return to the game show format [12]. But CBS didn’t know what would go out on the air on February 3rd. Gleason ultimately continued his apology, performed a sketch or two, and also brought out a chimpanzee.

On February 6th, The New York Times reported the Kellogg Company had withdrawn its sponsorship of You’re in the Picture “on the grounds that the comedian no longer is presenting the program it bought” [13]. The Liggett & Myers Tobacco Company continued as sole sponsor of Gleason’s program.

For the next seven weeks Gleason held court on CBS with The Jackie Gleason Show, an informal half-hour conversation between Gleason and a guest or two. Jack Haley appeared on the February 10th episode following an “abrupt cancellation” by Mickey Rooney [14]. Other guests included Bobby Darin, Jayne Mansfield and Art Carney.

Gleason was scheduled to leave for Paris at the end of March to begin production on the movie Gigot. The decision was made to conclude The Jackie Gleason Show at that time [15]. The final episode aired on March 24th, with guests George Jessel and Rudy Vallee. It was replaced the following week by ‘Way Out, an anthology series hosted by Roald Dahl.

The Paley Center for Media has in its collection the January 20th premiere of You’re in the Picture as well as the January 27th apology, as well as the March 3rd episode of The Jackie Gleason Show with Jayne Mansfield and the March 10th episode with Floyd Patterson and Ingemar Johansson. Audio recordings of the final six episodes of The Jackie Gleason Show (February 17th through March 24th) are held by Archival Television Audio.

Rumors of the existence of a second episode of You’re in the Picture have circulated for decades but have never been confirmed. Reportedly, it was videotaped in advance but never aired.