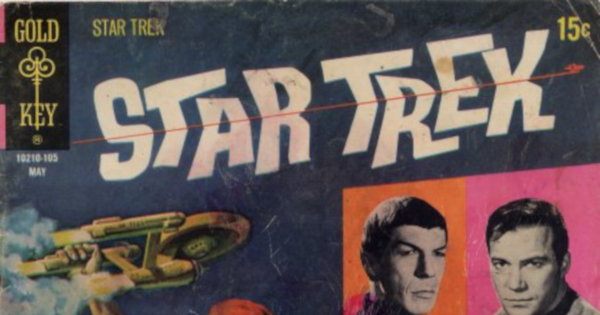 I’ve read a fair number of comic books based on the various Star Trek shows. Some of them have been quite good while others just couldn’t reflect the chemistry of the cast or the tone of the series. This issue of Gold Key’s comic book series based on Star Trek, though, is just terrible. The story isn’t awful but its conclusion includes a huge plot hole. The real problem? The artwork. It’s almost unrecognizable.

According to the Star Trek Comics Checklist, the artist for this issue was Alberto Giolitti, a man who never saw a single episode of Star Trek and worked solely from photographs. So it’s actually impressive that he managed as well as he did. Still, that doesn’t explain why Scotty (played by James Doohan) was depicted as a tall, blond man when the character had black hair and while not short, wasn’t a towering figure. 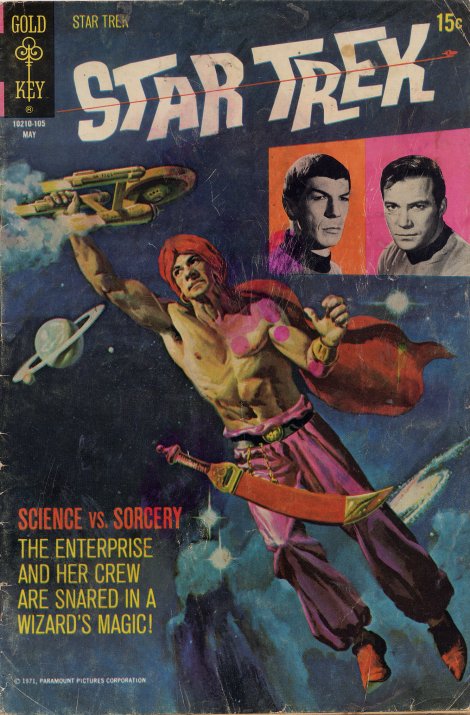 Furthermore, there are some issues with the color of the uniforms. Although Captain Kirk occasionally wore a green shirt, none of the other characters did. Scotty, for example, wore a red uniform. Spock’s was blue. So was Doctor McCoy’s. Not in this issue. Kirk, Scotty and McCoy all wear green uniforms (so does Sulu, who wore a gold uniform in the series). Spock does have the correct blue uniform. For some reason, the uniforms only occasionally include rank insignia.

I don’t recall ever seeing a communicator but there were plenty of phasers. They have holsters! And look only vaguely like the phasers from the show. They look more like standard ray guns. Plus, they’re red.

As for the likenesses of the actors, at times they’re pretty spot on. Spock, of course, has his pointy ears, although they’re a little longer and pointier than they were on television. Even with the ears, Spock occasionally doesn’t bear much of a resemblance to Leonard Nimoy. The same goes for McCoy and Kirk. Sometimes they look like DeForrest Kelly and William Shatner, sometimes they’re vague. As mentioned, Scotty is a tall blonde man and never once looks like James Doohan.

The story, “Sceptre of the Sun,” is in two parts. It opens with Kirk, Spock, Scotty and McCoy facing off against a pair of giant rock giants (“Jim, the phasers have no effect on these things!” “Keep firing Bones–if we don’t stop the rock giants, the Enterprise is doomed!“). We then flash back to the Enterprise making its way to Starbase 10 when, suddenly, the ship is grabbed by a giant space genie. Kirk, Spock, Scotty and McCoy then disappear.

They meet Chang, a sorcerer, who wants them to bring him the Sceptre of the Sun, a powerful mystic device that he can use to defeat Xandu, his arch-enemy. He threatens to destroy the Enterprise if the men don’t do as he demands. So, with a woman named Marla as a guide, the four set out across the burning desert. They face off against the rock giants, meet a group of humans from Earth (they left during the Eugenics War and Chang was among them) who want to help them.

After retrieving the sceptre, a huge robot attacks! Spock is able to destroy it and realizes that not all is as it seems. Chang transports everyone back to his fortress and then turns one man into a toad. He grabs the Enterprise was a tractor beam and then creates a giant creature to kill Kirk, Spock and everyone. But Spock walks right through it! Chang isn’t a sorcerer and everything they’ve seen and battled was just an illusion.

Hrm. So, those rock giants were illusions? The giant robot that Spock jumped on and blew up was an illusion? The giant space genie that grabbed the Enterprise? An illusion? That doesn’t make much sense. None at all, really. Anyway, even if these were all illusions, the tractor beam dragging the Enterprise to the surface of the planet isn’t. Kick has Sulu blast the fortress with the ship’s phasers and the tractor beams disengage.

Chang dies after lightning hits his sword and the humans are left to their own peaceful devices. Kirk and the others return to the Enterprise, hoping that there aren’t any other Changs out there waiting to destroy them.