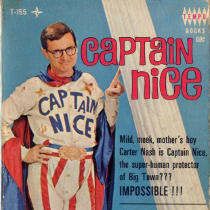 I must preface this review with a caveat: I haven’t actually finished reading this novel. Nevertheless, I feel confident discussing it because, frankly, the plots in novels like this one really aren’t all that important. Really, when the protagonist is, as the title boldly declares, a “mild, meek, mother’s boy,” the only thing Captain Nice has to deliver is outrageous humor. And boy, does it deliver. Some of the humor is so outrageous, in fact, that it’s almost painful to read. But it reflects the tone of the series.

Like dozens of other TV tie-in novels, Captain Nice was written by William Johnston. By the time it was published the program it was based on, NBC’s Captain Nice, was probably already off the air. It ran for just 15 episodes between January and May of 1967. William Daniels starred as Carter Nash, a feeble, unimposing scientist who lives with his domineering mother. Using a secret formula he devised, Carter turns into the inept superhero Captain Nice and fights crime in Big Town.

As Captain Nice opens Big Town is being threatened by Thomas Fidget, a man who used to work with Nash at the police laboratory. Fidget was fired. To get his revenge he built a time machine and is threatening to disappear the town’s top politicians sideways into time if he isn’t paid a billion dollars. Captain Nice is soon on the job. 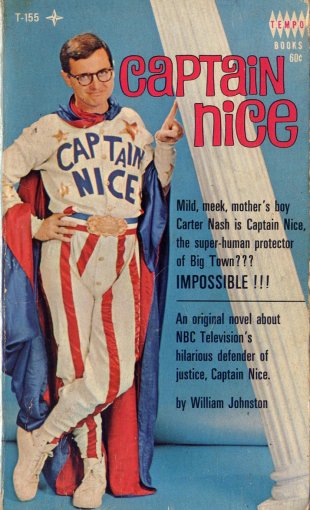 I can’t say whether Captain Nice captures Fidget (I assume he does) before the mayor and the chief of police disappear. I can state unequivocally that Carter is depicted as a complete and utter buffoon. Here’s a choice excerpt:

Carter had risen, holding the lamp. Carefully, he placed it on the table, then inched away. Finally, confident that the lamp was safe, he turned and strode toward the television set. An instant later he felt a tug at his ankle. His foot was caught in the cord. Behind him, the lamp crashed to the floor once more. Carter, off balance, lurched into another table, knocking a second lamp and a candy dish from their perch. Ricocheting off the table, he tripped over a footstool, did a perfect somersault, performed a belly-whopper across the coffee table, and ended up where he had started–on the couch; but with his head buried under the cushions instead of sitting up.

I rest my case. 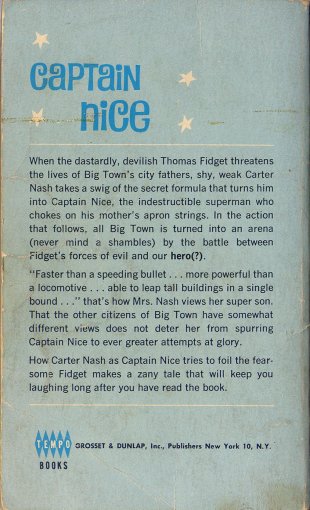 As I said earlier, some of the humor is a little painful. The above paragraph wasn’t too bad, to be honest, but later on when the Mayor and the Chief of Police were having their pictures taken right before a raid on Fidget’s presumed hideout, there was an attempt to make it seem as if the photographers were having a hard time taking their last photographs: “For the sixth time, the photographers were taking the last picture” and “No more than a half-hour later, the photographers finally snapped the final picture.” I found this particularly weak. Perhaps it would have played out better on the television screen.

One Reply to “Bookshelf: Captain Nice”