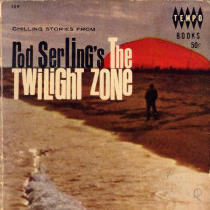 This short story anthology, which cost fifty cents when it was published in 1965 as a paperback, contains ten short stories written (or adapted) by Walter B. Gibson. They were originally published in 1963 by Grosset & Dunlap as Rod Serling’s The Twilight Zone, a hardcover book that included an additional three stories and sold for $3.95. A second hardcover volume, titled Rod Serling’s The Twilight Zone Revisited, was published in 1964 and also later released as a paperback. A 1984 omnibus collection reprinted both anthologies, but I’m not sure if it included all of the short stories from the hardcover editions or those from the paperback versions.

To give them authenticity, [the stories] have been based in varying degree upon well-recorded incident or experiences in which many persons have sincerely and implicitly believed; particularly those who participate in weird events. As a result, these tales combine the elements of actuality and fantasy, putting them in that bourne where they so rightfully belong–The Twilight Zone.

Such is the impact of a full-fledged ghostly experience, the sort of “shocker” that turns a doubter into a believer. While such adventures may not be too happy in real–or unreal– life, one thing is certain. It is fun to read about them, as you will find out when you delve into the pages that follow.

Frankly, I think most of these stories focus far too heavily on the horror, something The Twilight Zone rarely did. There are lots and lots of ghosts (two of the stories even have the word ghost in the title) and off the top of my head I can only recall one episode of The Twilight Zone that involved ghosts (“The Changing of the Guard,” originally broadcast June 1st, 1962). 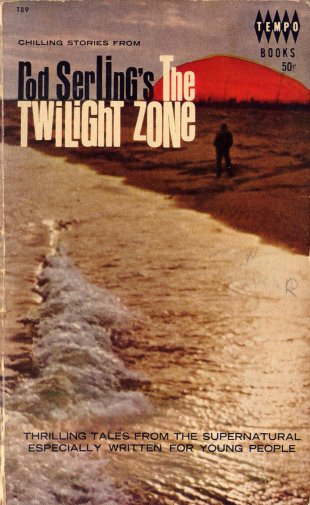 Here are the titles of the ten stories:

The first story, “The Ghost of Ticonderoga,” tells the tale of Donald Campbell, Laird of Inverawe in Scotland, who hides the killer of his cousin and in turn is haunted three times by the ghost of said cousin, who warns him not to shield the murderer. But Inverawe made a promise to the man before learning about his cousin’s death and doesn’t listen to the ghost. So, the ghost warns Inverawe that the two shall meet again at Ticonderoga where he shall pay. Years later, during the French and Indian War, Inverawe is fighting with the British in America and is among those charged with taking Fort Carillon (the 1758 Battle of Ticonderoga). He is wounded in the fighting and meets his cousin’s ghost again before dying. The curse has been fulfilled. The story, unfortunately, was very predictable.

Another story, “The Curse of Seven Towers,” deals with a castle that is said to be haunted by a bunch of ghosts and a curse that follows the family that owns the castle. The current owner has sold the castle and is throwing one last party. When a few of the guests see a ghost or two, the owner gets really, really scared; he thinks the curse is about to kill him. It turns out one of the guests is a cousin who actually has a better claim to the castle and is the true owner. While being shown around, the guest is killed and the curse fulfilled, leaving the owner free and clear. This wasn’t a predictable story but neither was it very engaging. 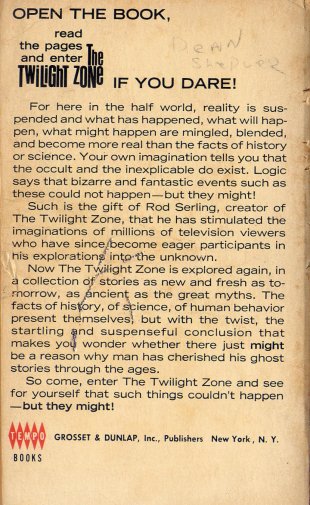 I’m not going to discuss the other stories, in case anyone wants to track down a copy of the book and read them. Again, these don’t fit very well into The Twilight Zone mold and I can’t see fans of the series enjoying them. Interestingly, the author of these short stories — Walter B. Gibson — is much better known as the creator of The Shadow (aka Lamont Cranston), the long-running radio and pulp hero of the 1930s and 1940s.