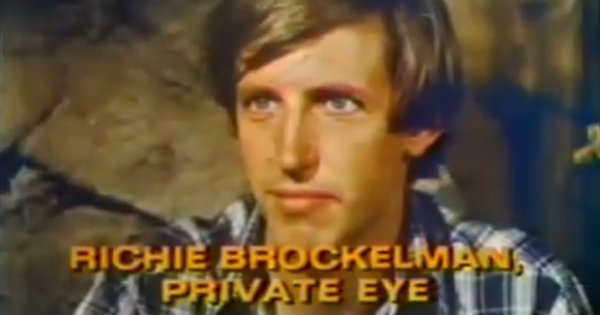 I wonder if you might know the name of a show that ran for one summer only, in 1967, I think, or maybe a year earlier or later. It featured a young, fast-talking blond guy who drove around in a convertible and tried to be a detective but who solved got results mostly by conning people. His favorite phrase was, “the thing of it is….” Any idea what this show might be?
Gene

The young, fast-talking blond guy Gene refers to in his question is Richie Brockelman, a character played by Dennis Dugan in a made-for-TV movie called broadcast on Wednesday, October 27th, 1976 from 8:30-10PM. Television listings at the time referred to the telefilm as Richie Brockelman, Private Eye but when it was rebroadcast in May 1977 it bore the title Richie Brockelman: The Missing 24 Hours.

Richie Brockelman was a very young, very inexperienced private investigator who was hired by an amnesiac, played by Suzanne Pleshette, who thought she was somehow involved with a murder. The character reappeared in February 1978 in a two-hour episode of The Rockford Files. Stephen J. Cannell, co-creator of The Rockford Files, co-wrote Richie Brockelman: The Missing 24 Hours with Steven Bochco.

A limited run series titled Richie Brockelman, Private Eye premiered on Friday, March 17th, 1978. It co-starred Barbara Bosson and Robert Hogan, who had also appeared in Richie Brockelman: The Missing 24 Hours. The series ran for just five episodes and was not renewed for the 1978-1979 season. The theme song, “School’s Out,” was written by Stephen Geyes and Herb Pederson. Richie Brockelman would make one last television appearance in March of 1979, once again in a two-hour episode of The Rockford Files. It seems Stephen J. Cannell simply could not get enough of Richie Brockelman.

To bring this back to Gene’s question, Richie Brockelman used the phrase “the thing of it is, is…” when explaining himself, although I can’t say whether it was used in the original made-for-TV movie or just the limited series or both. At least one telefilm was later created by editing episodes of Richie Brockelman, Private Eye together. Neither the original made-for-TV movie nor the limited series are available on DVD but Brockelman’s appearances on The Rockford Files can be found on the Season Four and Season Five sets, respectively. They are also available for streaming through Netflix but not, at the moment, on Hulu.com.