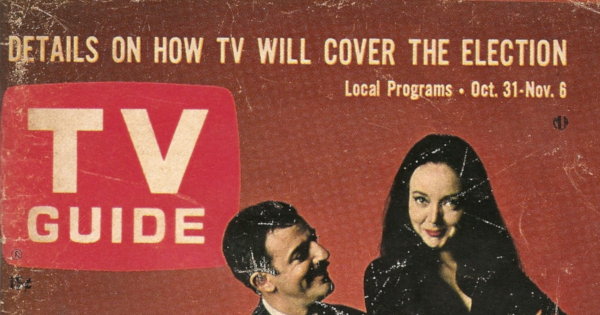 On the Cover: John Astin and Carolyn Jones from ABC’s The Addams Family (photograph by Ivan Nagy).

Those of you who have been following A Year in TV Guide since it started last month will know that every issue was building towards the 1964 Presidential Election between President Lyndon Johnson and Senator Barry Goldwater. TV Guide ran articles and editorials about the upcoming election as well as news reports. The start of the 1964-1965 season saw both parties buying time on the networks, pre-empting regular programming both nationally and locally.

Now, finally, the election is here. On Tuesday, November 3rd, 1964 the country chose its next president and the networks were there to cover the returns. Helping them this year were computers. Lots of computers. Lots of big computers. Neil Hickey’s article “The Night of the Computer” includes details about the computers: ABC had a Burroughs B-5000 Information Processing System; CBS had some IBM 7010s; and NBC had a bunch of RCA 303 and 3301 computers.

In addition to their computers and experts, the networks joined with the Associated Press and United Press International to form the Network Election Service (NES) to tabulate votes. That way the total number of votes would be uniform across the networks, making it easier for viewers to keep track of what was going on. Each network would, however, have its own projections. 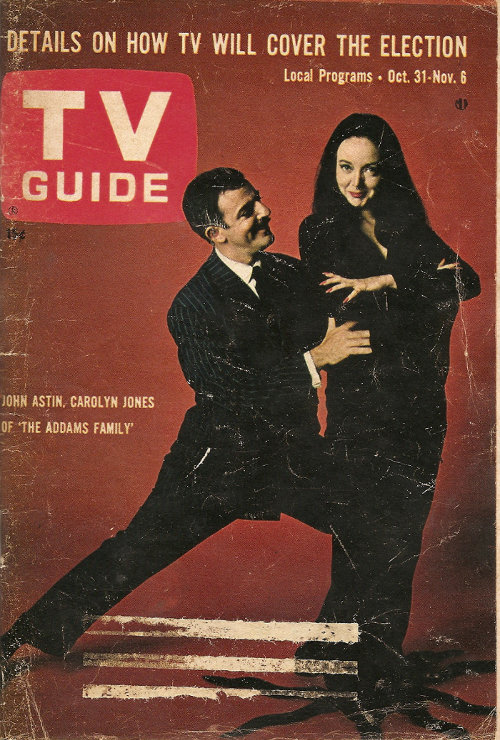 There are three other articles in this issue. “Out of the Purple Onion…” is a two-page look at the Smothers Brothers, who were still a few years away from courting controversy with their CBS variety show. “‘I Knew I Had Been Shot'” is a fascinating oral history by NBC reporter Alvin Rosenfeld and cameraman Jay Miller who came under fire in August 1963 while covering the conflict between Turks and Greeks in Cyprus. And Dwight Whitney’s “Addams’ Eve” examines the life of Carolyn Jones, who played Morticia on the new ABC sitcom The Addams Family.

The “As We See It” editorial this week supports legislation introduced by Senator Jacob Javits (R., NY) that would close all polls at the same time to avoid voters being influenced by the close of polls in certain time zones. All polls would be open at least 12 hours. It opposed other legislation that would prohibit reporting of election returns until all polls had closed.

Cleveland Amory’s review of Mr. Broadway on CBS was printed in the national section this week. He noted the fast pace of the series, which starred Craig Stevens as a public relations man, but called it “strangely unmoving” because “the world depicted is so patently phony that it is hard to get enough unphoniness, let alone believability, to hold us for a full hour.” He criticized all of the “plugs” in the first episode for New York City restaurants and night clubs as well as appearances by designer Oleg Cassini and columnist Leonard Lyons.

Also in the national section: a two-page picture feature showing how the island set for Gilligan’s Island was constructed at the CBS Studio Center; another Designer’s Choice feature showcasing outfits by Helen Rose modeled by actress Vera Miles; a crossword puzzle; and a cartoon on the inner back cover by L. Herman depicting the evolution of TV sets from 1947 to 1965.

Notes from the Hollywood and New York TV Teletype columns:

An hour-long special on the Inter-American Highway, produced by Lou Hazam, will air on NBC on March 23rd, 1965.

There was only one letter about the new season in the letters page this week and it was a response to Cleveland Amory’s October 18th review of The Rogues:

Cleveland Amory rightly used the strong term “offensive” in describing a recent episode of The Rogues. It was so degenerate that government regulations could be right around the corner for a network that would accept 30 pieces of silver to endanger the Nation’s moral fiber.
M.F. Kennedy
Oklahoma City, Okla.

(The episode in question is “Viva Diaz!” which originally aired on October 4th, 1964.)

There were five letters about sports. One complained that half-time ceremonies weren’t being fully broadcast, two were about the World Series and, and two were negative responses to NBC’s Olympic coverage:

If NBC didn’t want to carry the Summer Olympic Games, why did they bother to bid for them? After the magnificent coverage given the Olympic Trials all summer by ABC, Americans had a right to expect more than the kind of coverage usually given the daily weather.
John E. Higgins
Scituate, Mass.

In my opinion, NBC’s Olympic coverage was pitiful. Maybe it was because I was spoiled by ABC’s masterful job last summer.
William J. Blewett Jr.

There was also a letter complaining about commercials that were “whispered, confidential messages” and another suggesting a new name for That Was the Week That Was — That Was the Weak That Was.

This being Election Week, the were plenty of election advertisements. Both CBS and NBC ran full page ads promoting their respective election coverage, as did WTIC-TV (Channel 3) in Connecticut for its local and network coverage. A special page in the listings section gave readers and overview of who would be hosting election coverage on each network. 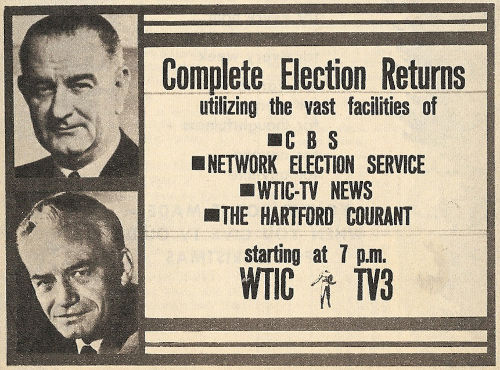 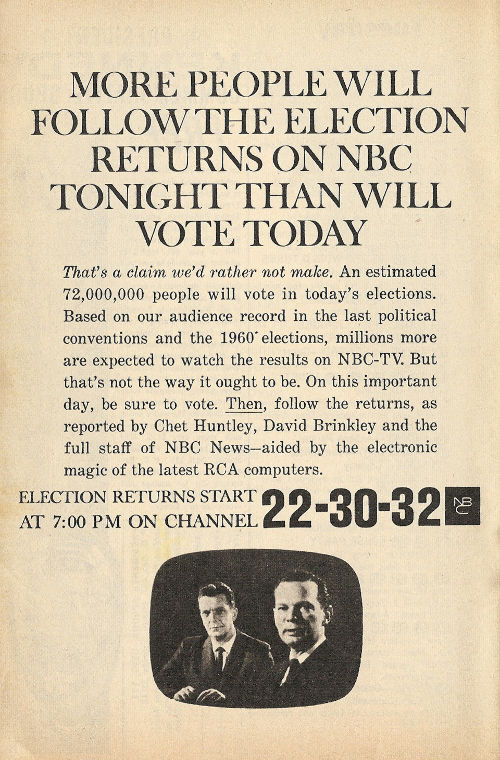 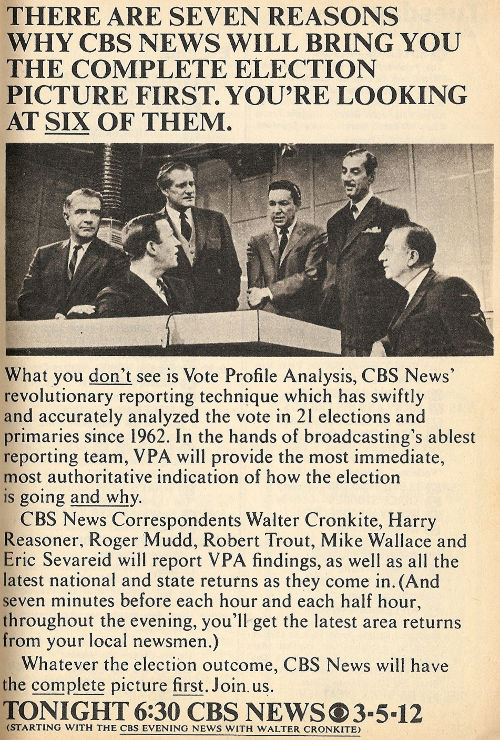 The three days leading up to the election were filled with paid political talk on multiple stations, some national and some apparently local. TV Guide listed ten such programs in its TeleVision Guide but I think there were even more within the listings. On Saturday, Sunday, and Monday TV Guide printed a notice warning readers that the major parties could purchase additional political time, further disrupting network schedules.

On Election Night, a full-page TV Guide Close-Up ran down how the networks planned to cover the elections, with comprehensive lists of reporters. All would start at 7PM, although locally in Connecticut WNHC-TV (Channel 8) would air local coverage from 6:15-7:30PM hosted by Stelio Salmona and George Thompson, pre-empting the first half-hour of ABC’s national coverage. A special notice was printed at the end of the day’s listings alerting viewers that network coverage would continue “throughout the early morning hours until major races are decided.”

The day after the election, there were a few post-election specials. CBS Reports was pre-empted on Wednesday, November 4th for an hour-long live special called “What Happened Last Night,” with Walter Cronkite. ABC aired an installment of its Politics ’64 series from 10:30-11:30PM called “Where Do We Go from Here?” with Clare Boothe Luce, Arthur Schlessinger, Oliver Quayle, Howard K. Smith and others. And NBC aired a live post-election special with Chet Huntley and David Brinkley from 11:30PM-12:30AM, interrupting The Tonight Show with Johnny Carson.

Locally, I’m sure every station covered Election Night to some degree, but aside from the WNHC-TV coverage it doesn’t look like any station pre-empted national coverage or aired any specific post-election specials.