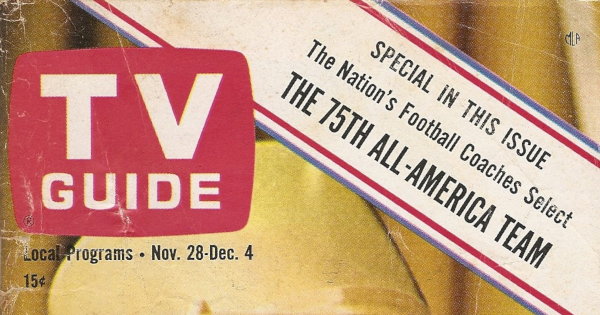 On the Cover: Elizabeth Montgomery of ABC’s Bewitched (photograph by Ron Thal).

There’s a five page special feature in this week’s issue of TV Guide (it’s six pages if you count the page with a big picture and the title) and it has nothing to do with television. Not really, anyway. It’s an article about the 1964 All-America football team, chosen by the American Football Coaches Association. Other TV Guide articles about football either were discussing specific games on TV or exploring behind-the-scenes aspects of getting football on TV. This article, written by University of Oregon head football coach and American Football Coaches Association president Len Casanova, is literally just a rundown of the players named to the 75th All-America team. It’s publication in TV Guide shows just how important the game of football was to the television industry.

There are four other articles in this issue. “‘Double, Double Toil and Trouble'” by Richard Warren Lewis is an interesting look at the circumstances surrounding the production of ABC’s new sitcom Bewitched. The pilot for the series was filmed in November 1963 and shortly thereafter Elizabeth Montgomery learned she was pregnant. Her husband, William Asher, was the show’s director. Her due date was July 21st, 1964 — long after the first season of the series should have gone into production. 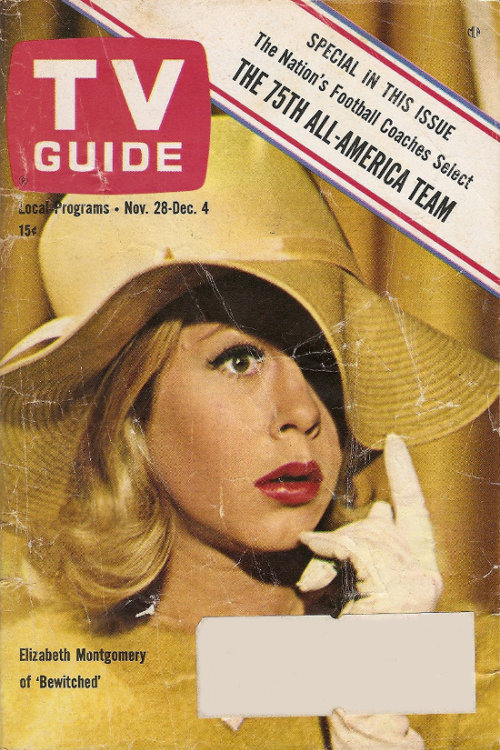 Asher shot as many scenes not involving Montgomery as he could from the first five episodes while waiting for her to give birth and recuperate enough to be ready to start work. She gave birth on July 24th and was in front of the camera 24 days later. To catch up on production, Montgomery worked 14-hour days to film 12 episodes, some of which were completed in just three days. Despite the hectic schedule, or perhaps because of it, critics raved about Montgomery’s performance.

Neil Hickey’s “Craig Stevens: from Shamus to Flack” is a two-page article about the actor’s transition from star of Peter Gunn to star of Mr. Broadway. As it turns out, Stevens was appearing on Broadway in Here’s Love when David Susskind approached him about starring in Mr. Broadway and when he agreed to take the part Susskind’s company had to buy him out of his contract for Here’s Love. The article ends on a downbeat note, explaining how CBS suspended production of the series in October and its future was in doubt. [As this week’s “For the Record” column notes, Mr. Broadway was cancelled by CBS and replaced in January 1965.]

Other articles include “Her Face Is In Style These Days,” about actress Barbara Barrie, and “‘Dear Jerk…,” in which KPIX news director Deacon Anderson shares some of the letters he’s received from viewers (they range from hostile to downright bizarre).

The “As We See It” editorial this week focused on community antenna television (CATV) and the problems it raised for the television industry. Originally devised as a way to bring television to areas too small or remote to support local stations, CATV soon branched out and started expanding into areas that had one or two stations, raising cries of unfair competition from the existing stations.

In some cities already served by numerous television stations, CATV systems began importing faraway stations with good movies and good sports, again raising cries of unfair competition. CATV also made it difficult for UHF stations to succeed. According to TV Guide, “the only solution seems to be some sort of legislation that would empower the FCC to regulate CATV and keep television competition on an even keel.”

Cleveland Amory’s review in this issue was a twofer, covering both The Addams Family on ABC and The Munsters on CBS. He peppered the review with word substitutions, using “asp” for “ask” and “weirds” for “words,” to give but a few examples. He preferred The Addams Family, explaining that “while the whole thing is kidded up to a point–it’s only up to that point. Underneath, there is a basic satire which still retains its validity.” He praised the cast, particularly John Astin and Carolyn Jones. The Munsters did not fare so well. “In the episodes we have seen,” wrote Amory, “the scripts have been unsophisticated to the point of insipidity, the humor headstone heavy and the satire nonexistent.”

Rounding out the national section was the familiar crossword puzzle and a picture feature that went behind the scenes of NBC’s Hallmark Hall of Fame episode “The Other World of Winston Churchill.”

The “For the Record” column this week included four news reports:

From the Hollywood and New York TV Teletype columns:

The letters page was all over the place this week. There were three letters in response to the November 14th article about Count Marco, one in opposition and two in support:

Your Nov. 14 article “The Man Women Love to Hate” led me to the obvious conclusion: The major problem of the American woman is a surplus of “Count Marcos”–not to be confused with “gentlemen,” of whom there is a critical shortage.
Sandra L. Duan
Denver

Count Marco’s endeavor to halt the progress of the retardation of the femininity of the American woman is to be applauded. Every male in the country should join the crusade.
Lorene Neal
Indianapolis

Why is he only on the West Coast? Bring him to the Middle West and the East Coast. We’ve got a few female slobs, too.
Gertrude DeGroot
Grand Rapids, Mich.

There were also two letters about The Les Crane Show, one from a reader who called the show a disaster and another from a former Johnny Carson fan who loved Les Crane. And there were two letters responding to “Sophia Loren in Rome,” one from a reader who thought the special was “marvelous” and another from someone who didn’t really like it. Other letters included praise for sportscaster Paul Christman; praise for Profiles in Courage; and a complaint about the November 14th cover featuring a painting of Cara Williams that one reader thought was “too, too goody gumdrop.”

With the anniversary of President Kennedy’s assassination and Thanksgiving over, television was fairly quiet this week. NBC repeated a 90-minute color special about Cecil B. DeMille called “The World’s Greatest Showman” on Sunday, November 29th from 8:30-10PM. It originally aired in December 1963. CBS aired its second Young People’s Concert on Monday, November 30th from 7:30-8:30PM, conducted by Leonard Bernstein and presented by the Bell Telephone System. The theme was Farewell to Nationalism.

WHCT-TV ran an advertisement for the Wednesday hockey game: 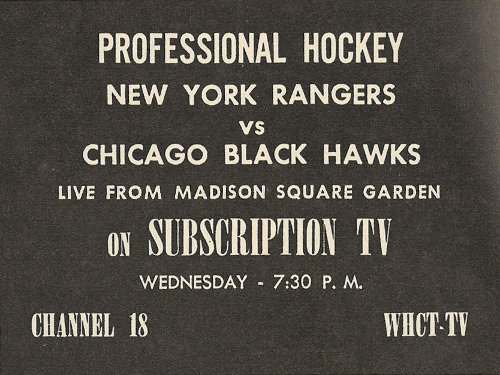 Tuesday, December 1st, 1964
Jack Woolner of the Massachusetts Division of Fisheries and Game takes a look at the upcoming deer-hunting season.

WTIC-TV (Channel 3) aired a half-hour panel discussion called From the College Campus on Sunday, November 30th from 9:30-10AM. Leonard Tomat, direct of the Trinity College Student Center, moderated the panel of students who studied abroad during 1964.

Here’s an advertisement for “Woody’s Workshop,” a woodworking series that aired on WHNB-TV (Channel 30) and its translator (Channel 79) in Connecticut on Saturdays: 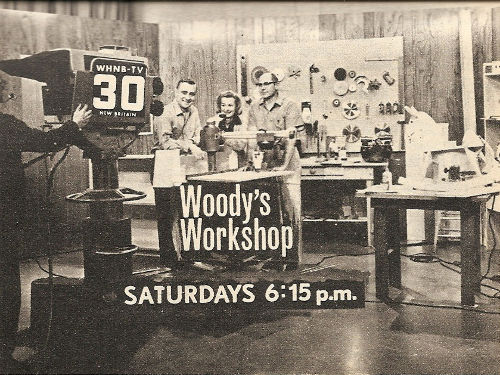