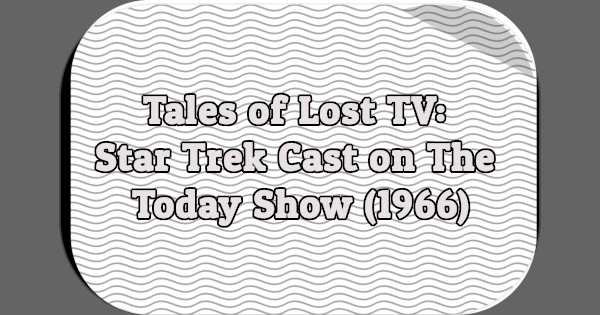 Usually, Tales of Lost TV covers a particular TV show or program that no longer exists. This month, I’m writing about a September 1966 interview segment from The Today Show. Why? Because it featured William Shatner and Leonard Nimoy talking about Star Trek. More importantly, it aired before the show debuted. That makes it rare and potentially unique.

The interview, which also included actress Grace Whitney, may have been the first time Shatner and Nimoy appeared on television discussing their roles on Star Trek. Sadly, it is likely lost forever.

The network proudly proclaimed NBC Week 1966 the first time in television history that an entire network schedule would air in color. NBC went to great lengths to let viewers know about NBC Week during the summer of 1966. There were countless promotional spots on television and radio, print advertisements, special newspaper supplements, and an hour-long fall preview special hosted by Jack Burns and Avery Schreiber.

Promotional booklets were sent out for the network’s ten new shows, including Star Trek, The Girl from U.N.C.L.E., and The Monkees. The Star Trek booklet famously includes two airbrushed photographs of Leonard Nimoy as Spock, intended to make him appear less demonic. Hundreds of thousands of color posters featuring returning NBC hits like Bonanza and Get Smart were sold to fans eager for new episodes of their favorite shows. Star Trek posters were made as well but not sold to the public.

I first learned of the existence of The Today Show interview a number of years ago when I stumbled upon the following entry in The New York Times television listings for September 1st, 1966:

It’s vague, of course, but as a lifelong Star Trek fan, the entry immediately intrigued me. What did mean? Did it refer to the entire cast? Just William Shatner and Leonard Nimoy? Where were these unspecified “stars” interviewed? In The Today Show studio? The Star Trek set? I had a lot of questions and no easy way to find answers.

In fact, for a long time, The New York Times was the only proof I had that the cast of Star Trek were on The Today Show prior to the show’s debut. I’ve read a lot of books about Star Trek, including several autobiographies, and I don’t recall ever coming across a reference to any interviews on The Today Show in 1966.

Eventually, I found references to the September 1st, 1966 interview in TV listings from other newspapers. For example, here’s an entry from the Long Island Star Journal

Rather than the entire cast, apparently only William Shatner, Leonard Nimoy, and Grace Whitney were guests on The Today Show. Credited as Grace Lee Whitney on Star Trek, the actress played Yeoman Janice Rand in eight episodes before being written out of the show. Prior to its debut, she posed alongside Shatner and Nimoy in a variety of early publicity photographs.

Let’s Go to the Videotape

Ed Ames, featured performer in NBC-TV’s “Daniel Boone,” will sing (7). William Shatner, Leonard Nimoy and Grace Whitney, stars of the new fall NBC-TV show, “Star Trek,” are interviewed on video tape by Barbara Walters (7:30). Washington, D.C., news guest will be interviewed (8). A feature on the experiences of an American college student living in the Soviet Union (8:30).

Barbara Walters conducted the interview. It aired at 7:30AM ET from videotape, not live. That could prove the interviews took place on the Star Trek set rather than in The Today Show studio. More importantly, it means there’s a very small chance the footage still exists.

Why? Had the interview aired live, the odds of finding a recording would be almost nonexistent. The fact that the interviews aired from videotape offers the tantalizing possibility that the original videotape–or a copy–could be out there somewhere, waiting to be rediscovered.

Unfortunately, it’s just as likely The Today Show engineers erased and reused the videotape just days or weeks after the September 1st, 1966 edition of The Today Show aired. We may never know for sure.

Were you a Star Trek fan from the very beginning? Do you remember seeing William Shatner, Leonard Nimoy, and Grace Lee Whitney on The Today Show in September 1966? Could a videotape of the interview still exist? Hit the comments with your thoughts and be sure to check your closets, attics, basements, and crawl spaces.