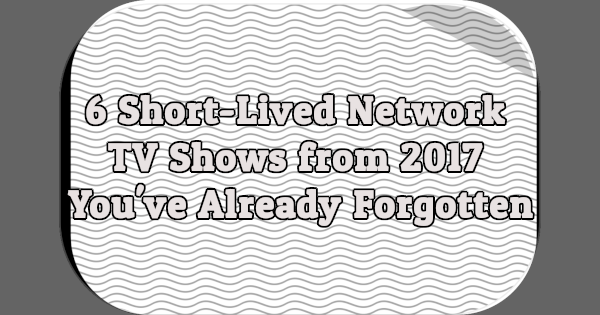 We’re three days into 2018, which means memories of 2017 are starting to fade. That includes memories of short-lived network television shows. Expect my comprehensive recap of new obscurities from last year sometime next week. Until then, enjoy this brief look at six network TV shows from 2017 you’ve likely forgotten about. How many do you miss?

Remember back in 2014 when NBC cancelled this retelling of The Wonderful World of Oz before production started? I’m guessing the network wishes it hadn’t changed its mind and revived the series. Unlike the other shows on this list, Emerald City is available on DVD (and Blu-ray).

NBC never aired three episodes of this quirky sitcom set in the DC Comics universe. But DC Comics temporarily offered one of those unseen episodes on YouTube because it guest-starred Adam West and the company wanted to pay tribute to the actor following his death on June 9th. If I recall correctly, NBC aired many episodes out of order, making it confusing to keep track of story lines.

Sadly, there are no unaired episodes of Making History. I say that because it’s a hilarious show. Even before it debuted to low ratings, I knew it never had a chance, so I cherished every episode. So, of course I wish there were a few more FOX never aired.

Poor Jenna Elfman can’t catch a break. By my count, Imaginary Mary is her fifth failed sitcom in a row after Courting Alex (CBS, 2006), Accidentally on Purpose (CBS, 2009-2010), 1600 Penn (NBC, 2012-2013), and Growing Up Fisher (NBC, 2014). But did anyone other than a few powerful ABC executives think this concept would prove popular with viewers? Maybe the promos I saw didn’t do the series justice.

With the exception of Mr. Ed, sitcoms about talking animals, talking babies, or talking cars tend not to last long. I’m almost positive my mother loved Downward Dog. She’s the only person I know who watched it.

We’re not quite in “blink and you missed it” territory with Me, Myself & I, but we’re close. The sitcom survived more than a month before CBS yanked it off the air. It seems viewers are not interested in exploring the life of a man in the past, present, and future. CBS, of course, refuses to call Me, Myself & I cancelled. Will the network burn off the remaining episodes at some point later this season? For the sake of the show’s few fans, I hope so.

Do you remember any or all of these short-lived network shows? Which do you miss the most? Sound off in the comments. And remember, next week I’ll be publishing my comprehensive review of new obscure TV shows from 2017.