When Batman premiered on ABC in January 1966, the campy sitcom was an instant success. After two seasons, ratings began to fall. To convince network executives a new character was needed, an 8-minute presentation was produced, introducing Yvonne Craig as Batgirl. It was not a pilot for a proposed Batgirl spin-off.

In September 1965, National Periodical Publications (a precursor to today’s DC Comics) contracted with ABC for a live-action television series based on its Batman character [1]. Although originally scheduled for a fall debut, the new Batman series was soon given not one but two time slots as part of ABC’s mid-season 1966 plans [2]. It would air on Wednesdays and Thursdays from 7:30-8PM beginning January 12th and January 13th, respectively.

Despite the early time slot, Batman was not intended solely for children. Producer William Dozier realized that a heavy emphasis on “exaggerated cliché” could draw adults to the program [3]. And, drawn they were. Early “overnight” ratings from Trendex covering the fifty largest television markets in the country gave the Wednesday premiere a staggering 27.3/49 rating; the Thursday premiere an even more impressive 29.6/59 [4]. ABC easily crushed its competition, the first half of Lost in Space on CBS and the first half of The Virginian on NBC.

Still, such impressive results from a heavily promoted double premiere were hardly unexpected. The real question would come in the following weeks. Would Batman be able to maintain its initial popularity? When Nielsen released its ratings report for the two week period January 10th to January 23rd (which included Batman‘s first four episodes), the Wednesday installment had an average 26.2 rating, ranking 9th, while the Thursday installment averaged a 26.3, ranking 8th. The success of Batman pushed ABC’s weekly rating during primetime for those two weeks to an 18.8, up two points from the previous two weeks [5].

For the week ending February 13th, Thursday’s episode of Batman was at the top of the Nielsen report covering the thirty largest markets, with a 28.5 rating. Wednesday’s episode pulled a 26.5 rating and ranked fifth. Thanks in no small part to Batman, ABC won the week and, more importantly, had increased its share of the audience 10% in just five weeks [6].

When the 1965-1966 season ended, a total of 34 episodes of Batman had been broadcast, twelve on each day. Both installments were in the top ten, with the Thursday installment ranking fifth and the Wednesday installment tenth. Only two other ABC shows, Bewitched and The Lawrence Welk Show, ranked in the top thirty. Whether it was due to the intense promotional campaign ABC waged prior to the show’s premiere or the “camp” factor, the viewing public loved Batman.

When Batman returned in the fall of 1966 for its second season, ratings had cooled somewhat from the heights of the first season. The show was still scheduled twice a week on Wednesdays and Thursdays from 7:30-8PM. For the two weeks between September 12th and September 25th, 1966, Batman (Wednesday) averaged a 30 share in its two outings, ranking in second in its time slot behind The Virginian on NBC and barely edging Lost in Space on CBS. The Thursday installment averaged a stronger 35 share for its two episodes, winning its time slot, beating Jericho on CBS and Daniel Boone on NBC [7].

Viewers were still interested in Batman, but not in the incredible numbers they had been during the first season when it was the latest fad. That fad quickly passed: imitations introduced in January 1967 on the other networks — Captain Nice on NBC and Mister Terrific on CBS — never caught on. And The Green Hornet, an attempt by ABC and William Dozier to repeat Batman‘s success in the fall of 1966, was less than successful and was canceled after a single season.

A total of 60 episodes of Batman were broadcast during the 1966-1967 season. Neither installment ranked in the top thirty, however. For NBC, Batman‘s slip in the ratings on Wednesdays was a boon for The Virginian, which ranked 11th overall for the season, up from 25th during the 1965-1967 season when Batman was introduced.

Due to the declining ratings of Batman, particularly the Wednesday installment (which when ABC announced its schedule for fall 1967, Batman was only airing on Thursdays [8]. Partially to blame was Lost in Space, which aired opposite the Wednesday installment on CBS. Dozier explained that “they both appeal to the same audience–we estimate that 60 per cent of our viewers are in the 4-to-12 age bracket” [9]. As producer Howie Horwitz aptly put it “we were a victim of our own format” [10].

In an attempt to reinvigorate the show Dozier decided to add a new character for Batman‘s third season. Yvonne Craig would play Commissioner Gordon’s daughter Barbara, a librarian whose alter ego was superheroine Batgirl. Batman was widely watched by young boys and Dozier was of the opinion that a strong female character could bring in an equal number of young girls [11]. Horwitz explained that the character was added to “give the little girls and big boys someone to identify with,” alluding to Craig’s obvious attractiveness, but pointed out that Batgirl wasn’t intended as a love interest for Batman, who was “too square” and didn’t have time for romance; conceivably there could be sparks between Barbara Gordon and Bruce Wayne, however [12].

Yvonne Craig wrote a July 1967 Associated Press article in which she explained how she felt about the character of Batgirl:

And while Batgirl is an active type, she is also very feminine. None of that smacking people low with karate and gung-fu. In my opinion, three karate chops, and you’ve lost your femininity. If a girl goes on a date and a fellow gets fresh, she can’t very well give him a karate chop for a good-night. But if she ducks, she’s simply adept and feminine. Batgirl will be aiding and assisting Batman and Robin, not constantly rescuing then. I like that, too. [13]

Elsewhere, Craig suggested that the reason Honey West (starring Anne Francis as a private detective and broadcast by ABC during the 1965-1966 season) went off the air was that the character “was always going around clobbering somebody, and you can’t look feminine when you’re doing that” [14].

In order to sell ABC executives and/or Batman‘s production company, 20th Century Fox Television, on the idea of adding a new character to the show, a presentation film was put together to showcase Batgirl. In it, Batgirl rescues Batman and Robin from the clutches of the villainous Killer Moth and his henchmen.

Narrated, like each episode of the series, by William Dozier, the presentation film opens with Barbara Gordon hard at work at the Gotham City Library helping Bruce Wayne prove a point to one of his fellow millionaire playboys. Little does Bruce know that this pretty librarian will soon be saving his life. 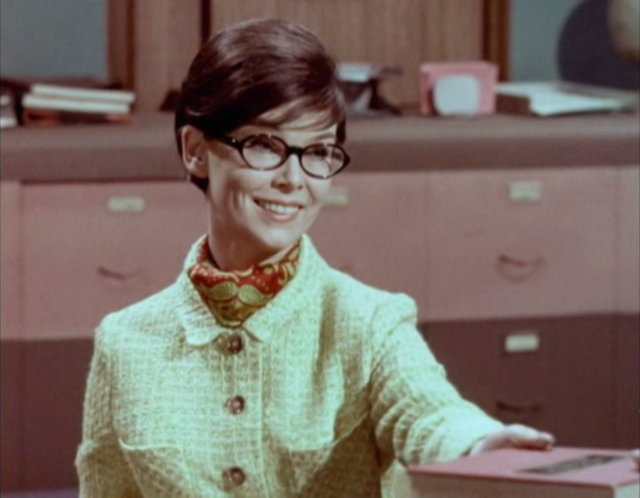 Bruce and Barbara chat for a moment and Bruce points out his ward, Dick Grayson, to the librarian before cheerfully saying goodnight. As the two walk out they take note of the four strange men sitting together at a table, all dressed in blue, all wearing metal antennae on their heads. They decide a visit from Batman and Robin might be in order. Shortly after they leave the Killer Moth and his men swing into action, knocking out Bruce’s friend and locking poor Barbara in a lounge. Little do they know that inside the lounge is a secret closet containing her Batgirl outfit.

Before long the three have dispatched of the Killer Moth. When Batman asks her identity Batgirl answers that it must remain a secret, just as the identities of Batman and Robin are unknown to her. She then disappears, leaving Batman to ponder aloud whether they’ve just met a new member of their team or a crime-fighting rival. The presentation film ends with Batgirl riding off into the night on her Batgirlcycle.

The presentation film does an adequate job introducing the characters of Barbara Gordon and Batgirl while allowing the latter to remain something of a mystery. There is no mindless exposition explaining how or why Barbara Gordon decided to put on a cape and cowl and become Batgirl (or how she was able to build a secret closet in the Gotham City Library to keep her Batgirl outfit). That being said, the Killer Moth is without a doubt one of the most pathetic villains of all time. Nothing could be more conspicuous than four men sitting together wearing antennae on their head and yet only Bruce Wayne gave them a moment’s notice. 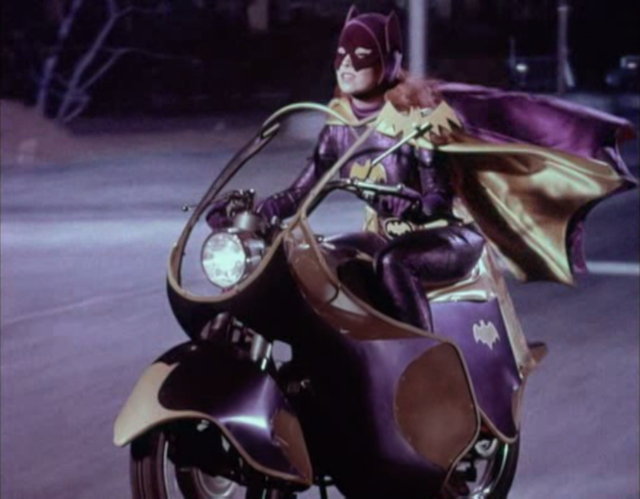 In the presentation film Batgirl is never seen punching anyone. Instead, she uses a rolling globe or a falling bookcase to incapacitate the Killer Moth’s henchmen. She’s allowed to get in a few kicks here and there but nothing more. Of course, the same could be said for April Dancer on The Girl From U.N.C.L.E., who often left the fighting to her male partner, or any of the female security guards on Star Trek, who could kick an alien but never punch them. During the 1960s, it seems, women weren’t allowed to punch because as Yvonne Craig pointed out that wouldn’t be feminine.

After making the presentation film Yvonne Craig had to wait before learning if Batgirl would be added to the cast of Batman for the 1967-1968 season. She was told the news while at an ABC function in Chicago:

I suddenly realized that I was in the dream situation of every actress who aspires to a television series role. There was no worry about an audience–“Batman” is an established show–and there was no concern about whether it would sell because it’s already sold. As a veteran of four unsold television pilots I can appreciate that kind of security. [16]

Unfortunately, Craig’s first season as Batgirl would be her last. The third season of Batman premiered on Thursday, September 14th, 1967. In January of 1968, William Dozier announced that ABC had informed him they would not be renewing Batman for a fourth season. Although ABC denied they had told Dozier anything, the Nielsen ratings spoke for themselves. Batman had sunk as low as 48th in the weekly ratings, a far cry from its glory days at the top of the charts [17].

On February 13th, 1968, ABC confirmed reports that Batman had been cancelled. The last episode aired Thursday, March 14th and the following week The Second Hundred Years (which had premiered in September of 1967) would take over Batman‘s time slot [18]. The Second Hundred Years was itself canceled in March of 1968 when ABC revealed its new fall schedule; The Ugliest Girl in Town was then given the Thursday at 7:30PM time slot [19].

Thanks to a good citizen from Gotham for providing high quality screen caps from the Batgirl presentation film.

Batman and all related characters and elements are trademarks of and © DC Comics.

25 Replies to “Batgirl and the Batman Phenomenon”