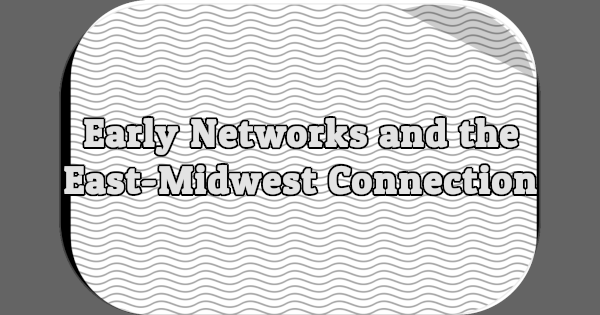 During the 1940s, NBC and DuMont created early TV networks in the East and the Midwest. In January 1949, a connection between these separate networks brought live television to a larger audience for the first time.

In early 1940 W2XBS, NBC’s experimental television station in New York City, was linked to General Electric’s station WRGB in Schenectady, New York by a radio relay system developed by General Electric. The success of this new relay was announced on February 22nd, 1940 by Dr. W.R.G. Baker, General Electric’s television and radio department manager. Baker suggested that “within a short time, people in Chicago may see the sun set in New York while it still is high above the horizon in Chicago” [1]. 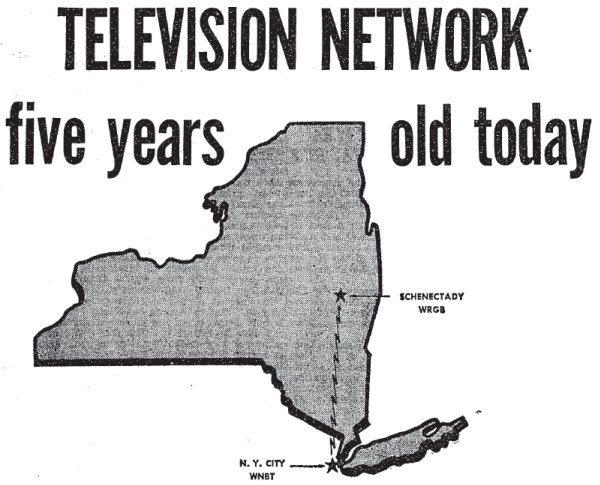 On January 12th, 1945 General Elecric ran a full page advertisement in The New York Times celebrating the fifth anniversary of the New York City-Schenectady relay. The ad noted that “this was America’s first television network–the first time that two television stations broadcast simultaneously the same regular programs” and revealed that the very first program transmitted from W2XBS (later known as WNBT) to WRGB on January 12th, 1940 was a play entitled “Meet the Wife” [2].

NBC expanded its network to three stations on Saturday, October 27th, 1945 when WNBT and WRGB were joined by WPTZ, the Philco station in Philadelphia, Pennsylvania. The stations joined together to televise President Truman’s Navy Day address at Central Park. The broadcast, captured by WNBT’s cameras, ran from 1:15-2:07PM [3]. The three stations were called “the nation’s first television network” by the Associated Press [4].

Reflecting the problem of determining what constitutes a television network, DuMont may also lay claim to launching the first network. On April 15th, 1946 its New York City station (WABD) was linked via coaxial cable to its Washington, D.C. station (WTTG) for a two-hour program celebrating the opening of the new DuMont television studios at the John Wanamaker store in New York City. The New York Times wrote that “the program will mark the first use of the New York-Washington coaxial television cable on a ‘permanent basis’ for commercial programs” [5]. 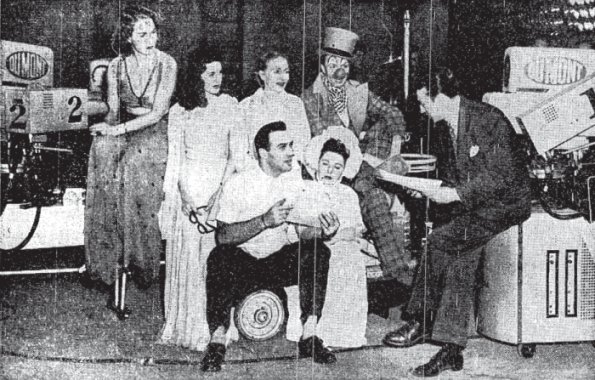 In addition to speeches and addresses about television’s future, a pair of entertainment programs were shown during the broadcast. New York City presented a sketch titled “Let’s Have Fun” while Washington, D.C. offered a “dramatic fantasy” titled “Experience” [8].

With its Eastern network underway, NBC set its sights on the Midwest. On August 25th, 1948 The New York Times reported that NBC would open a Midwestern network on Monday, September 20th, consisting of KSD-TV (St. Louis), WMJ-TV (Detroit), WTMJ-TV (Milwaukee), WSPD-TV (Toledo) and WBEN-TV (Buffalo) [11]. The St. Louis and Detroit stations would provide the bulk of the 12 hours of original programming the network hoped to have on the air [12].

The Midwestern network came courtesy of AT&T/Bell’s coaxial and radio relay system and wasn’t limited solely to NBC. The system was described by Larry Wolters in The Chicago Daily Tribune on October 31st, 1948 in the following manner:

Service is provided in both directions between St. Louis, Chicago, Toledo, Detroit, and Cleveland, but service is only toward Buffalo and Milwaukee. At present they cannot originate television programs. The co-axial link to St. Louis passes thru Terre Haute, Ind., and Danville, Ill. [13]

On November 29th, 1948 Kukla, Fran and Ollie made its debut on NBC’s Midwestern network [12]. It had premiered as a local series on Chicago’s WBKB-TV on October 13th, 1947. Two additional stations, both owned-and-operated by NBC, soon joined the network: WNBK-TV (Cleveland) and WNBQ-TV (Chicago).

In December 1948 plans were underway to televise the January 20th, 1949 inauguration of President Truman over the largest television network and to the largest number of viewers ever up to that point. The New York Times reported on December 12th that the four networks would pool their coverage in Washington, D.C. with NBC’s camera on the steps of the Capitol building, ABC’s at Lafayette Park and in the Esso Building, DuMont at the Treasury Department and CBS at the Old Post Office Building [13]. The official unveiling of the East-Midwest connection, however, would take place on January 12th. At least, that was the plan.

According to The Chicago Daily Tribune, “when it became apparent that no agreement could be reached among the various video interests as to which would be the first to use the newly completed coaxial cable circuits” the opening was moved up a day and a special 90-minute broadcast planned [14]. All four networks plus station WPIX in New York City would be involved and the program would be seen in a total of fourteen cities and 34 stations reaching from Boston to St. Louis [15].

AT&T, the company responsible for the coaxial connection, revealed its final allocations in late December, with the networks getting some of the more competitive time slots on a rotating basis [16]. This was necessary because there would be only one physical cable available and only one network could use it at a time (additional cables were already planned to alleviate the problem). A chart published by Billboard on January 8th, 1949 saw CBS and DuMont sharing the 8-9PM hour on Saturdays while NBC and WPIX shared the 10-11PM hour on Tuesdays. The 9-10PM hour on Saturdays was shared by three networks: ABC (9-9:30PM), NBC (9:30-9:45PM) and DuMont (9:45-10PM). And the 10-11PM hour would rotate between the four networks on a half-hour basis [17].

The Chicago Daily Tribune reported the following hourly breakdowns for the connection, reached after six weeks of talks between the networks (and WPIX):

On January 5th, WPIX announced it was withdrawing from the January 11th broadcast and the coaxial connection in general because it did not feel the short amount of time on the cable was worth the expense; the station did note that it was only pulling out until April 1st and hoped that the addition of other cables by AT&T would elevate the problem [19].

At 9:30PM on the East Coast and 8:30PM in the Midwest, the coaxial connection between the two regions was officially opened. A “roll call” of the cities in the new network kicked off the broadcast. Some reports placed the number of stations at fourteen, fifteen or seventeen but other reports gave the number as fifteen or even seventeen. The confusion was due to the fact that while seventeen cities were connected by the coaxial cable, only fourteen were involved in the January 11th broadcast. Here’s a list from The Chicago Daily Tribune:

For reasons unknown Newark, Schenectady and New Haven did not participate in the January 11th broadcast; Pittsburgh station WDVT, affiliated with DuMont, went on the air as part of the coaxial connection. [21]. The roll call was followed by a speech from Wayne Coy, FCC Chairman, from Washington, D.C. A film demonstrating network television, produced by the Long Lines Division of AT&T, came next and then a speech by AT&T President Leroy A. Wilson. Rounding out the first half-hour were additional speeches from the heads of the four networks as well as Mayor William O’Dwyer of New York City and Mayor Martin Kennelly of Chicago [22, 23].

The main portion of the broadcast, however, featured special fifteen-minute programs from each of the networks. First up was CBS with appearances from Arthur Godfrey and his friends Bill Lawrence, Janette Davis and the Archie Bleyer Orchestra, plus Douglas Edwards and Hope & Morey Bunin and their “Lucky Pup” show. Next came DuMont with Ted Steele and his orchestra, which included Elaine Vito, Ester Horrocks and Mac Ceppos. NBC offered Milton Burle and Harry Richman and ABC show a mystery called “Stand By for Crime” from Chicago with Marc Connelly as a guest star [24].

In his review of the broadcast for Billboard, Joe Csida revealed that the special ran an extra fifteen minutes and that Mayor O’Dwyer did not appear (instead, Vincent Impellitteri of the New York City Council spoke). The review called it “crummy” and a “sorry performance,” laying most of the blame on the entertainment rather than the talking heads. For example, “while [Arthur] Godfrey, with his amazing ease and Will Rogers-like charm, is undoubtedly a fine performer, he had nothing to work with here. And he tossed in plugs for his upcoming Chesterfield show, with a carton of Chesterfields in plain evidence on the table, in extremely questionable taste, considering the occasion [25].

Apparently, members of the various orchestras involved had a hard time keeping it together: “Midwestern viewers must have got the impression, incidentally, that in the East, sidemen in orchestras have been developed to replace the studio audience in radio, guffawing at things completely unfunny to listeners” [26]. As for the episode of Chicago’s Stand By for Crime, “maybe other offerings of this troupe have been good, but this one wasn’t. The story was poor, building neither its plotline nor characterizations adequately. The acting was for the most part pure, meaty Swift. The direction was an amateurish effort at Hitchcockism. Marc Connelly’s build-up intro only made the production seem that much worse” [27].

Programs Fly in Both Directions

Despite the limitations of the sole coaxial cable, the networks immediately began offering Eastern shows to Midwestern audiences and vice-verse. On January 12th, Chicago’s Kukla, Fran and Ollie was seen on the East Coast for the first time over NBC. ABC hoped to premiere a dozen Midwest programs within a week, including Super Circus, What Do You Think?, Stand By for Crime, Vaudeo Varieties and boxing [28].

Not all of these shows would be cleared in all of the cities making up the connection, but for many viewers the number of choices had suddenly been thrown wide open. On January 20th, President Truman’s inauguration went out over the coaxial connection, with stations throughout the East and Midwest covering the event from 11:30AM to roughly 4:30PM (Eastern time). The Chicago Daily Tribune estimated that some ten million viewers in all seventeen cities were watching (that included some Canadians able to pick up television stations in the States); by comparison, the number of people watching the inauguration in person was a paltry 130,000 [30].

For the record, AT&T opened two new cables to the Midwest on May 1st.

9 Replies to “Early Networks and the East-Midwest Connection”