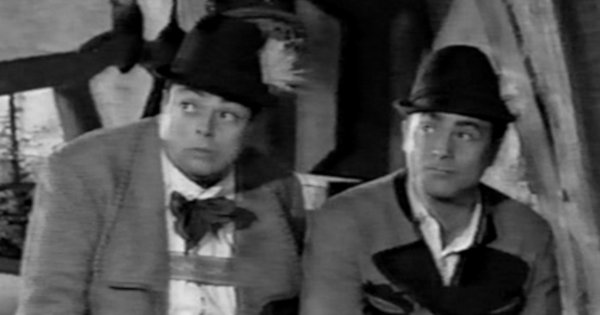 Rob Reiner created this unusual comedy series that ran for six episodes on CBS during the summer of 1991. Kevin Pollack and Bob Amaral starred as a forgotten comedy team. Each week, Reiner introduced a “lost” film short for viewers to enjoy–in glorious black and white.

It took producer Rob Reiner 13 years to bring Morton & Hayes to the small screen [1]. If not for the critical acclaim received by his 1984 mockumentary This Is Spinal Tap he may never have found a home for his unusual parody of and tribute to 1930s/1940s comedy shorts. Still, the concept was a tough sell. Would viewers want to watch supposedly long-lost films starring a forgotten comedy team in black and white? Would they even understand what Reiner was trying to do?

In March 1989, USA Today listed a sitcom called “Partners in Life” about “pratfall buddies” as a potential CBS series for the 1989-1990 season [2]. Although the network ordered a pilot, it declined to pick it up as a full-fledged series. Instead, CBS burned off the pilot more than a year later in August 1990.

Scott Williams of The Associated Press seemed unsure what to make of “Partners in Life,” which starred Kevin Pollack and Joe Guzaldo starred as comedians Chick Morton and Eddie Hayes. The two were trying to make their way home from Macao by working as rickshaw drivers to pay for tickets. Also appearing in the pilot were Jennifer Jason Leigh and Christopher Guest.

The fact that Dick Blasucci and Joe Flaherty wrote the script gave Williams pause, as did Rob Reiner’s involvement. Ultimately, he referred to the pilot as “a spoof of a spoof of a spoof” and suggested the talent involved could make it “weirdly funny or extremely stupid” [3].

Viewers didn’t give “Partners in Life” a chance. It aired on Friday, August 31st, 1990 opposite a repeat of Midnight Caller on NBC and a new episode of New Attitude on ABC. It averaged a 4.8/10 Nielsen rating, third in its time slot, and ranked 79th out of 88 programs for the week [4].

Despite the failure of “Partners in Life,” Reiner didn’t give up on his idea. According to The New York Times, he asked CBS for another chance when the network approached him about other projects. The series, rechristened Morton & Hayes, was given a six-episode trial run during the summer of 1991 alongside several other limited series. Although test audiences “responded very poorly” to the series, Steve Warner–CBS Vice President for Special Projects–hoped “it may have a chance to catch on” during the summer [5]. 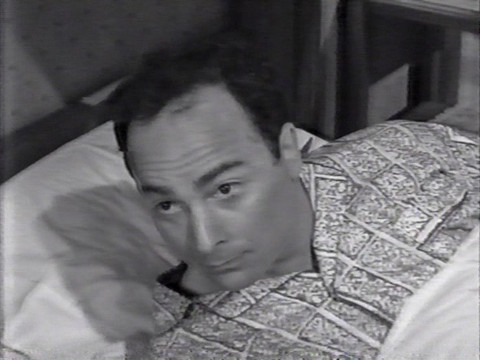 The pairing of Kevin Pollack and Joe Guzaldo in “Partners in Life” didn’t work because they were too much alike, according to Reiner. “It turned them into a Hope-Crosby type team,” he explained [6]. Pollack returned for Morton & Hayes while Bob Amaral replaced Guzaldo.

Reiner auditioned some 1,500 actors for the role of Eddie Heyes. Amaral was working as a bartender in Los Angeles when Reiner found him:

Bob is, like, born out of time. He could have existed in the ’30s and ’40s. The two of them clicked, and they looked right together. It was very hard to find the right actor. There are a lot of people who love this kind of film, but it’s not a style of acting that’s stressed these days. It’s thought of as being passe’ and old-fashioned. To find people proficient was difficult. [7]

Reiner created the series with Phil Mishkin, who wrote the first episode. The two had worked together decades earlier on All in the Family. While “Partners in Life” had aired entirely in color, episodes of Morton & Hayes would combine color with black and white. Reiner would appear in color at the start and end of each episode while the fake comedy shorts would be shown in black and white.

“Absolutely, there was resistance from the network to doing it that way,” said Reiner. “The first pilot was in color. To applaud CBS, they were smart — they said this is the show they were going to do” [8].

CBS scheduled Morton & Hayes on Wednesdays from 8:30-9PM. It would follow repeats of Police Squad!, which originally aired on ABC in 1982.

Some TV critics weren’t sure what to think about Morton & Hayes. Some praised its innovation while others criticized it for falling flat. Dorothy Rabinowitz of The Wall Street Journal was positive in her review: “This particular piece of summer fare is actually funny, which is more than can be said of most of what passes for comedy in the regular season” [9].

Mr. Reiner spent years trying to produce this “Morton & Hayes” series, and for years he was turned down. It’s nice to see that his persistence has paid off, that he’s created an original format for half-hour comedy. Sure, the show is sometimes dopey; sure its humor is sometimes a two-by-four across the head, but still, the belly laughs are there. As the old folks knew, things are just funnier in black and white. [11]

Other critics were less enthusiastic but still mostly positive. David Klinghoffer of The Washington Times rightly pointed out that “cautious CBS never – but never – would consider running [Morton & Hayes] in the fall” [12]. He suggested it couldn’t be sustained over the course of a traditional TV season. “Maybe for a novelty item like this,” he concluded, “a quick summer fling is just the thing” [13].

John J. O’Connor of The New York Times compared the “daffiness” of the “uninhibitedly sophomoric” Morton & Hayes to Get Smart and called the new sitcom “shameless, granted, but almost valiantly determined to get a laugh, and often succeeding” [14]. 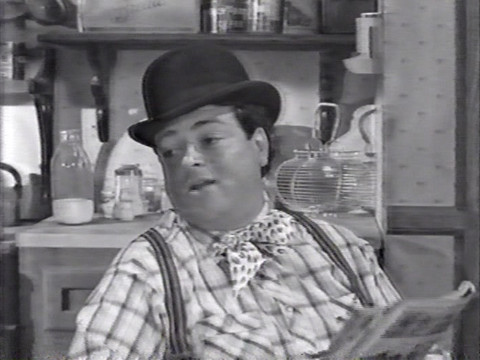 Ed Siegel of The Boston Globe was among those not impressed with Morton & Hayes. “Reiner and the production team of writer Philip Mishkin and director [Christopher] Guest never let themselves go and the result is an inhibited, static, black-and-white style that’s about as funny as Pat Buchanan and Michael Kinsley on ‘Crossfire'” [15].

“‘Morton & Hayes’ may lack inspiration,” declared The Washington Post‘s Tom Shales, “but it’s just loony enough to be ingratiating. It is scheduled for a six-week run, which should be precisely long enough” [16].

Finally, Scott Williams of The Associated Press had this to say: “You watch tonight’s episode, though, with a growing sense of unease, waiting for each bit to get funnier or to violate the conventions of the joke. It does not happen. The energy level stays flat” [17].

There were no regular characters on Morton & Hayes. Rob Reiner appeared as himself each week but every episode saw Kevin Pollak and Bob Amaral playing characters. In the first episode they were private detectives hired by Amelia Von Astor (played by Catherine O’Hara) to determine if her husband (played by Christopher Guest) was cheating on her. In other episodes they find themselves running an antique vase shop, crash a fancy dress party, are nearly served for dinner on a tropical island, and face off against the evil Dr. Mummenschvantz (played by Michael McKean). 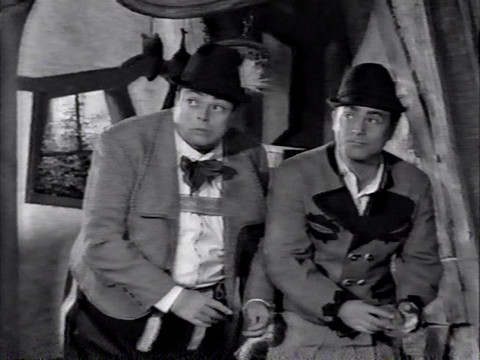 The series would stay near the bottom of the charts until the sixth and final episode aired on August 28th. A repeat of the “All in the Family 20th Anniversary Special” provided a strong lead-in and Morton & Hayes drew a 6.0 rating, placing it 73rd out of 90 programs [20]. Even at its best, the series drew ratings far too low for CBS to consider renewing the series for another season.

Only Pollak, Amaral and Reiner appeared in all six episodes. Christopher Guest had roles in three episodes, directed five, co-wrote two and served as executive producer along with Reiner and Dick Blassucci. Michael McKean, who had appeared in This Is Spinal Tap alongside Reiner and Guest, wrote and appeared in one episode and directed another. Joe Flaherty, who co-wrote “Partners for Life,” also wrote one episode of Morton & Hayes.