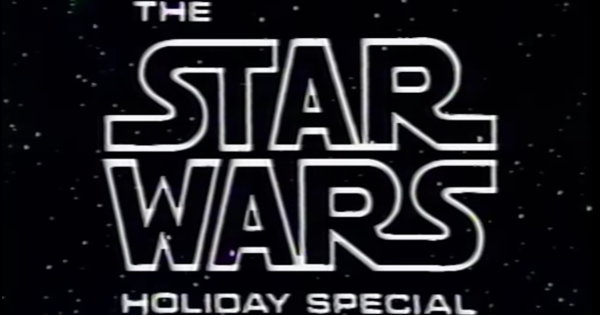 The Star Wars franchise has a long history on network television. ABC aired “The Making of Star Wars” in September 1977. CBS aired “The Star Wars Holiday Special” in November 1978. Then came a pair of made-for-TV movies and two Saturday morning cartoons on ABC in the mid-1980s. The original trilogy, the first two installments in the “prequel trilogy,” and the first installment in the “sequel trilogy” have also aired on network television.

A Star (Wars) Is Born

When Star Wars was released in theaters on May 25th, 1977 no one could have predicted the colossal media franchise it would become. The Associated Press, in an article discussing how Star Wars caused 20th Century Fox’s stock to skyrocket, reported that the film had made a $5.2 million in only twelve days — an astounding figure considering it was only being shown in 45 theaters [1].

The early and unexpected success of Star Wars led to a stream of merchandise, including a novelization, a comic book series, calendars, posters, t-shirts and buttons. There was even a disco version of the film’s soundtrack that sold 130,000 copies in a single week [2].

With seemingly anything and everything connected to Star Wars turning to gold, it was only a matter of time before the television networks tried to cash in. ABC announced in late August 1977 that it would broadcast an hour-long behind-the-scenes special titled “The Making of ‘Star Wars’ as Told By C-3PO and R2-D2” (more commonly known as “The Making of Star Wars”) at the start of the 1977-1978 television season.

Due to Star Wars mania, ABC was able to charge an impressive $175,000 per minute of commercial time for “The Making of Star Wars,” compared to $140,000 per minute for the six-part miniseries “Washington: Behind Closed Doors” starring Jason Robards, Cliff Robertson, Stefanie Powers and Robert Vaughn, among others [3]. The special aired from 8-9PM on Friday, September 16th, 1977 opposite the premieres of Sanford Arms and Chico and the Man on NBC and the premiere of The New Adventures of Wonder Woman on CBS.

NBC won Friday evening overall in the Nielsen ratings, so the special may not have performed as well as ABC had hoped [4]. The Star Wars franchise on television was off to a less than stellar start.

A little over a year later Star Wars returned to the small screen, this time with a variety special called “The Star Wars Holiday Special.” The two-hour extravaganza reunited the original cast of Star Wars (although Darth Vadar was seen only through cut footage from the film) as well as a slew of guest stars including Jefferson Starship, Art Carney and Bea Arthur.

CBS aired the special on Friday, November 17th, 1978 from 8-10PM opposite Diff’rent Strokes, The Rockford Files, and the start of Hallmark Hall of Fame on NBC and The Love Boat, and part two of Pearl (a miniseries about the attack on Pearl Harbor) on ABC. It is, at times, difficult to watch — an all-singing, all-dancing variety extravaganza set within the Star Wars universe. 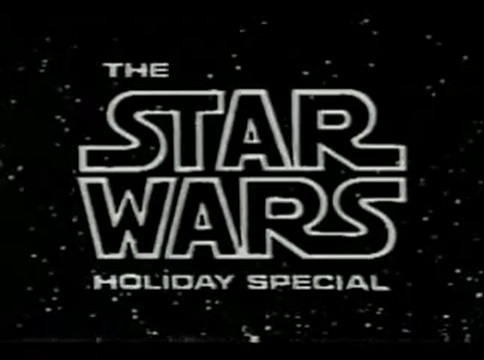 The plot of “The Star Wars Holiday Special” involves Han Solo and Chewbacca trying to outrun Imperial forces so they can get home to Kashyyyk (the Wookie home world) in time to celebrate “Life Day” with Chewbacca’s family: his father Lumpy, his wife Malla, and his son Itchy. However, the bulk of the special focuses on the family and not the beloved characters from Star Wars.

Aside from an introductory scene with Chewbacca and Han followed by the opening credits, the first ten minutes of “The Star Wars Holiday Special” consist entirely of various Wookies speaking in their native language. There were plenty of “Raaaars,” “Uuuurghs” and “Aaaaars.” Viewers who sat through this likely thought the special could only improve.

The special is really little more than a number of unconnected segments strung loosely together. In one, Lumpy amuses himself — and supposedly viewers — by watching an instruction manual for a toy he is trying to put together. In another, a propaganda film for the Empire entitled “Life on Tatooine” is somehow broadcast directly into the Wookies’ home. It runs an agonizing thirteen minutes.

As the special winds down, Wookies from far and wide gather along with the rest of the cast of the Star Wars gang (Luke, C-3PO, etc.) to celebrate Life Day and listen to Princess Leia belt out a song. Chewbacca then waxes nostalgic and recalls all the events of Star Wars.

“The Star Wars Holiday Special” also includes an animated segment, ten minutes in length, that introduces the character of Boba Fett to the Stars Wars universe. It animated by Canada’s Nelvana Studios, who were chosen for the job after George Lucas was shown a tape of their “A Cosmic Christmas” in May 1977 [5].

George Lucas was involved in the production of “The Star Wars Holiday Special” but not heavily. Five different writers are credited. For the animated segment, Nelvana was told to go for a “comic-book feel, very graphic rather than realistic” [6]. The finished product features rubbery yet recognizable characters.

“The Star Wars Holiday Special” was not a blockbuster in the Nielsen, ranking outside the top ten the week it aired. George Lucas reportedly loathes “The Star Wars Holiday Special” and would rather it never see the light of day again. However, bootleg copies have been making the rounds on the convention circuit for decades and the Internet has made the special easily accessible.

The Ewok Adventure & The Battle for Endor

It was nearly six years before Star Wars once again graced network television. George Lucas ventured into scripted TV drama with a two-hour telefilm called The Ewok Adventure (later retitled Caravan of Courage: An Ewok Adventure). Initially offered to all three of the networks, it was announced in June 1984 that the telefilm had found a home on ABC [7], [8].

The Ewok Adventure was not tied directly to any of the existing Star Wars films but was set in the same universe. The plot involved siblings Cindel and Mace Towani joining forces with Wicket the Ewok to find their parents after the family crashed on the forest moon Endor. The telefilm was broadcast on Sunday, November 25th, 1984 from 8-10PM, opposite Murder, She Wrote, The Jeffersons and Alice on CBS and telefilm The Vegas Strip War on NBC. It ranked second for the week with a strong 24.9 rating, behind only the second half of NBC’s Fatal Vision telefilm [9]. 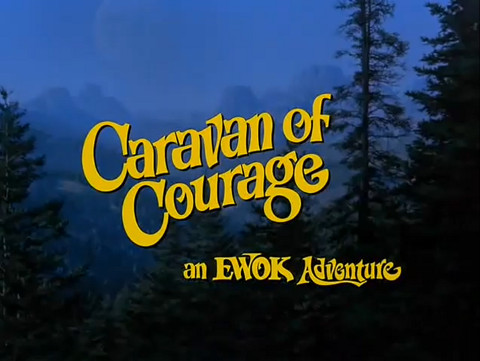 Caravan of Courage: An Ewok Adventure

A follow-up telefilm titled Ewoks: The Battle for Endor aired a year later on Sunday, November 24th, 1985. Back again were Cindel and Wicket, this time battling the evil forces of a king and a witch. According to TV Guide, ABC planned to announce that the telefilm may not be suitable for all family members due to violent content [10]. This time around, up against another made-for-TV movie, Doubletake on CBS and the first installment of miniseries “Mussolini: The Untold Story” on NBC, Ewoks: The Battle for Endor ranked 25th for the week [11].

On Saturday, September 7th, 1985, ABC premiered Ewoks and Droids: The Adventures of R2-D2 and C-3PO, a pair of half-hour cartoons based on Star Wars characters, airing back to back from 8-9AM. Produced by Nelvana, the shows were advertised as the “Ewoks and Droids Adventure Hour.” Only 13 episodes of each show were produced during the 1985-1986 season.

ABC aired an hour-long Droids special titled “The Great Heep” in prime time on Saturday, July 7th, 1986 from 8-9PM ET. It ranked a dismal 66th, dead last in the ratings for the week [12].

Beginning in September 1982, Star Wars was shown on pay-per-view subscription services scattered throughout the country, despite the fact that only half a million households were wired for pay-per-view [13]. HBO showed the film during the winter of 1983 and was disappointed at the lack of interest, due to the earlier pay-per-view showings and the film’s release on video cassette. Star Wars failed to rank as one of HBO’s ten most popular films [14].

By the time CBS got around to airing Star Wars for the first time on network television, the film had not only been shown on pay-per-view and cable and issued on video, it had also been re-released in theaters several times. CBS scheduled Star Wars on Sunday, February 26th, from 8-11PM, with a 22-minute making of feature to help fill the three hour time slot. Due to the perceived over-exposure of the film, and the fact that ABC was airing the first part of its racy “Lace” miniseries, CBS admitted that it was not expecting out-of-this-world ratings [15].

Unfortunately, those predictions came true: Star Wars drew a 25.1/35, ranking fifth for the week, while the first part of “Lace” tied for first with a 28.2/39 [16]. Although a 25.1 rating may seem like a success, according to The Wall Street Journal, CBS was forced to give refunds to some advertisers [17]. The relatively poor showing of Star Wars was only the latest in a string of blockbuster feature films being beaten in the ratings by made-for-TV movies or miniseries.

Star Wars: Episode III: Revenge of the Sith never aired on network TV. It made its basic cable premiere on Spike TV on Sunday, April 6th, 2008 on Spike.