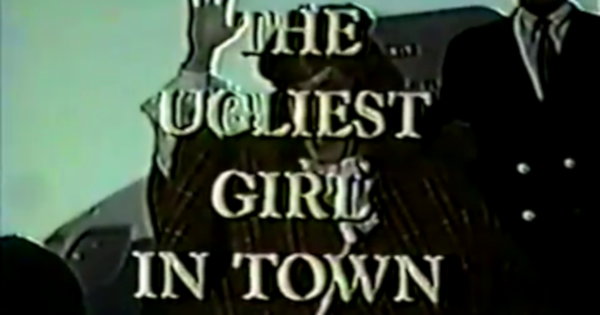 Considered by some to be one of the worst TV shows of all time, The Ugliest Girl in Town ran for 17 episodes on ABC during the 1968-1969 season. Filmed in London, the series is loud and vibrant and features a memorable theme song.

Blame It All On A Bad Dream

One night in 1967, scriptwriter Robert Kaufman (of Ski Party and Dr. Goldfoot and the Bikini Machine fame) had a bad dream [1]. He woke up, couldn’t fall asleep again, and picked up a magazine. Inside was an article about Twiggy, the famous model taking the world by storm. Kaufman thought Twiggy looked like a boy. And then it struck him: how about a television sitcom in which a boy is mistaken as a girl model? And how about setting it in London?

Kaufman brought the idea to Harry Ackerman at Screen Gems, who later explained that he’d “always been intrigued by the possibilities of a television comedy series set in mod London. And here was Bob Kaufman bringing me a comedy idea that would appeal to teen-agers and post-teen-agers, as well as young adults and older folk. I loved it” [2]. And so The Ugliest Girl in Town was born. Ackerman described the series as “an old-fashioned romantic comedy all dressed up in mod apparel for present day appeal” [3].

I do love your site especially on TV obscurities which brings back many memories, even though it does date me considerably, I do like the one on the UGLIEST GIRL IN TOWN which i am very ashamed to say was a show that I watched religiously-don’t ask me for my logic I was about four or five.
erp

In February 1968, ABC tentatively gave The Ugliest Girl in Town a Wednesday time slot before eventually settling on the Thursday 7:30-8PM half-hour where it would compete with Daniel Boone on NBC and a new comedy, Blondie, on CBS [4]. At the time, Harry Ackerman had two shows currently airing on ABC: Bewitched and The Flying Nun. A third series, The Second Hundred Years (also on ABC), had recently been cancelled.

Who Is The Ugliest Girl In Town?

Canadian actor Peter Kastner starred in The Ugliest Girl in Town as Timothy Blair, a young man working at the Harper Talent Agency in the lowest capacity possible: he gets sandwiches and makes deliveries. While delivering a contract to Julie Renfield (played by Patricia Brake), a British actress filming a horror movie in the United States, Timothy falls madly in love with her.

After going to extraordinary lengths to get her to notice him, Julie and Timothy fall madly in love with one another. Sadly, Julie has to return to her native England and Timothy can’t afford to go with her. Enter Gene, Timothy’s brother (played by Gary Marshall), a photographer who has just been contracted to snap pictures of hippies for a London magazine.

To make a long story short, pictures of Timothy wind up being sent to London where the folks at he magazine go wild over them. Only they think Timothy is a female model named Timmy and offer her a contract. The brothers pack up and head to London for two weeks so Timothy can be with Julie. There they meet David Courtney of the Courtney Talent Agency (played by Nicholas Parsons) and his assistant Sondra Wolston (played by Jenny Till). 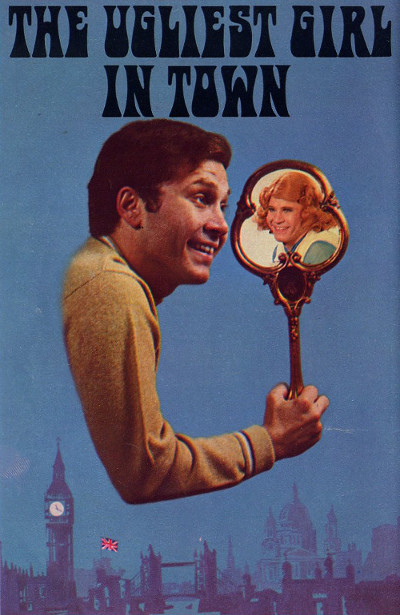 Julie is initially shocked to see Timothy as Timmy but soon the two are off on a wild modeling tour of London and spend every minute they can together. Meanwhile, Gene and Sondra have fallen in love as well. Two weeks later, when Timothy and Gene are set to return to the States, they can’t because Gene has racked up considerable debt gambling. Plus, Mr. Courtney finds out that Timmy is really Timothy and threatens to have him arrested if he doesn’t keep up the charade so the Courtney Talent Agency can recoup its investment. So, the rouse must continue but that also means Timothy gets to stay in England with Julie.

According to Kastner, it took about an hour to turn him into Timmy [5]. Playing Timmy didn’t really bother Kastner who explained “they pay you a fortune for doing these things and if I can live on nothing in London and we run a few years I’ll have enough money to produce my own films” [6]. He did admit that “it felt a little strange the first time I tried on the costume. But then I got used to it” [7].

Although its premise was absurd it was also a relatively simple one and it wasn’t difficult to come up with plots for episodes. Just think up situations where Timothy-as-Timmy is in danger of being found out. What would happen if Timmy was cast in a cameo role in a movie and it required a nude scene? How would Timothy deal with that? Or what if Timothy was called up for National Guard duty while still in London posing as Timmy? Or what if Timothy developed appendicitis while posing as Timmy and winds up being sent to the women’s section of a hospital? 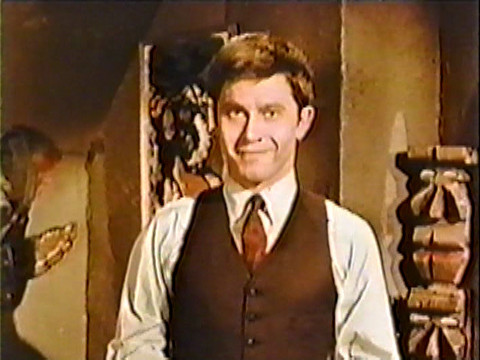 Other episodes involved Timothy and Gene’s parents visiting the two in London and learning the truth from Timothy while Gene tries to convince them his brother is working for the Secret Information Agency; Timmy is the number one suspect when a pair of diamond earrings go missing after a dinner party; Julie’s teenage sister becomes suspicious of Timmy; Timothy is accused of kidnapping Timmy; a publicity stunt has Timmy writing an advice column and his advice breaks up a marriage; Scottish singer Lulu mentors Timmy, who will be releasing her own single.

By the time The Ugliest Girl in Town premiered, Mod had evolved into Swinging London. The series was filmed in London and reflected to some degree whatever was actually going on in the city. There were bright, loud clothes and bright, loud music.

For the most part, television critics were savage in their reviews of The Ugliest Girl In Town, with James Doussard of The Louisville Courier-Journal writing that the series is “as humorous as terminal cancer” [8].

Ben Gross of The New York Daily News stated that he “couldn’t believe any of it” while Harry Harris of The Philadelphia Inquirer said that it had “some basically distasteful overtones.” Richard F. Shepard wrote in The New York Times that the series was “the most vapid half-hour in the nation last night” and Newsweek‘s Harry F. Waters suggested it was the “first television series aimed directly at the 12-year-old transvestite.” 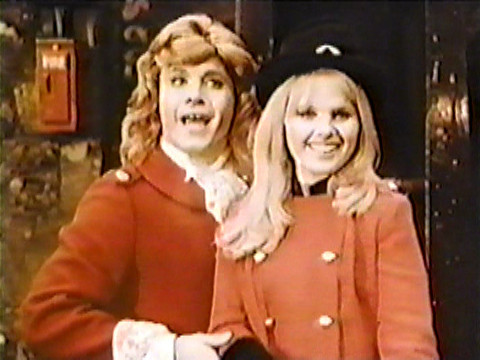 Peter Kastner and Patrica Brake as Timmy and Julie Renfield

Not all critics were entirely negative, however. In its review, Time argued that “here and there [it] amusingly needles the fashion pacesetters.” Bevo Baker of The Dallas Morning News wrote that “it’s funny in spite of a premise which is still raising eyebrows;” Lawrence Laurent of The Washington Post felt it was “better done than most of the original retreads of this season;” and Rick DuBrow of UPI said it was a “wild, half-hour comedy.”

The premiere episode of The Ugliest Girl In Town, aired Thursday, September 26th, 1968, drew a lowly 16 share in the New York City overnight Nielsens (covering just that city’s viewers) and a third-place 22.9 share in the 26-city overnight Trendex report (covering 26 cities where all three networks competed) [9]. The following week’s episode did better, with a 24 share in New York City (ranking first in its time slot) and a 27.3 Trendex share (ranking second in its time slot) [10].

According to “fast” national Nielsen ratings covering the first week of the new season (September 23rd through September 29th), the premiere of The Ugliest Girl in Town ranked 70th out of 86 programs [11]. It should be noted that during that first episode, The Ugliest Girl in Town faced the first half-hour of a two-hour Ironside episode, not its regular Daniel Boone competition.

In New York City, the October 10th episode could only muster a 14 share from 7:30-8PM, slightly better than the 9 share local programming drew on ABC from 10:30-11PM that same evening [12]. The writing was on the wall.

The End for The Ugliest Girl In Town

In mid-November, ABC revised its Wednesday, Thursday and Friday schedules, cancelling The Ugliest Girl in Town [13]. Ironically, the network chose Harry Ackerman’s The Flying Nun to fill the show’s 7:30-8PM ET time slot. The last episode of The Ugliest Girl in Town aired on Thursday, January 30th, 1969. ABC broadcast a total of 17 episodes, leaving three unaired. The unaired episodes were shown in other countries, included the United Kingdom. 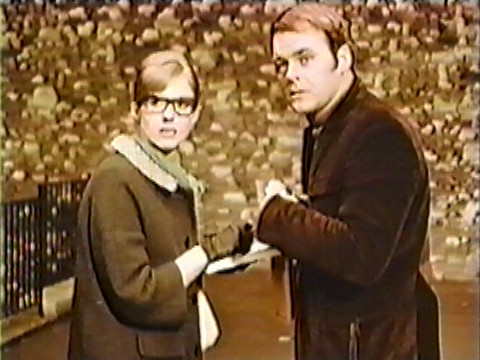 Garry Marshall and Jenny Till as Gene Blair and Sondra Wolston

Critic Howard Pearson, TV editor for the Deseret News, welcomed the end of The Ugliest Girl in Town, calling it “a tasteless production from the start.” He had predicted the cancellation at the start of the season. Pearson considered the show a costly failure for ABC due to the expense of filming in London. He argued “the network knew it had a loser from the beginning. They didn’t make any effort to improve the scripts. The situations were suggestive without being humorous, and the program’s single-joke line could have been told in one half-hour show” [14].

Perhaps one reason for The Ugliest Girl in Town‘s lack of success was the number of stations airing it. In September 1968, the series was cleared on 162 stations, compared 217 for Bewitched, 212 for The Flying Nun and 210 for That Girl [15]. On the other hand, ABC’s Here Come the Brides, seen on only 152 stations, and The Mod Squad, seen on 158 stations, both fared better than The Ugliest Girl in Town and were renewed for the 1969-1970 season. So station clearance alone can’t explain why the series failed.

I’d just like to add another bit of trivia I happen to know about the theme song to The Ugliest Girl In Town. It was written by the well known Brill-Building team of Howard Greenfield and Helen Miller, who also penned many other 60s hits such as the Shirelle’s Foolish Little Girl, Bobby Vee’s Pretty Little Charms and Gene Pitney’s It Hurts To Be In Love.”
Dan H.

The theme song to the series, titled simply “The Ugliest Girl in Town,” was written by Howard Greenfield and Helen Miller, produced by Bill Traut for Dunwich Productions and performed by the Will-O-Bees. The full-length version runs 2:06 and was issued by SGC Records on a record single along with “I Can’t Quit Lovin’ You Baby.” It’s a catchy song, one that viewers of the series in 1968 will never be able to forget. The Paris Sisters later covered the theme song.

Colgems Records released a Peter Kastner single, “I Just Can’t Get Over You,” in late 1968 to coincide with the debut of the series. Popular Library published an original tie-in novel written by Burt Hirschfeld.

In what can only be called a shockingly misguided marketing strategy, cosmetics company Yardley of London was a “major sponsor” of The Ugliest Girl in Town [16]. Yardley described the series as “a wild, way out, fun-filled romp” [17].

17 Replies to “The Ugliest Girl In Town”