In this M*A*S*H spin-off, Gary Burghoff stars as rookie cop Walter O’Reilly, working in St. Louis alongside is cousin, dealing with pickpockets and strippers. CBS aired the pilot in July 1984 but only in the Eastern and Central time zones.

M*A*S*H is one of TV’s most beloved sitcoms and one of its longest-running. On the air from September 1972 to February 1983, the series ran for 11 seasons and 251 episodes. Like the 1970 film MASH, the series was based on a 1968 novel written by Richard Hooker. Perhaps the most popular character to appear on the series was Walter “Radar” O’Reilly, played by Gary Burghoff.

Burghoff originated the role of Radar in the film MASH and was the only main cast member to return for the TV series. After seven seasons on the show, from 1972 to 1979, Burghoff decide to leave the show. He made cameo appearances in two early episodes of the eighth season when it premiered in September 1979 followed by a two-part farewell episode broadcast the following month. But Burghoff’s association with M*A*S*H had not ended.

When M*A*S*H came to an end in February 1983, a spin-off called AfterMASH was developed for the 1983-1984 season. It premiered in September 1983. In December of that year TV Guide reported that Burghoff would be appearing as Radar in an upcoming episode of AfterMASH, suggesting it would “serve as the vehicle for yet another M*A*S*H spin-off, this one to star Burghoff” [1].

Burghoff made a cameo appearance at the tail end of the January 16th, 1984 episode of AfterMASH, seen rehearsing for his wedding. That was followed by a full-fledged guest appearance in the January 23rd episode in which he shows up at the doorstep of his former commanding officer, Sherman Potter, having run out on his bride-to-be shortly before the wedding. They later reconciled and were married.

In a January 20th interview with Vernon Scott for United Press International, Burghoff explained why he left M*A*S*H: “I couldn’t function anymore. I’d given all I had to give to the part and to the show. I cared too much to give less than my best. I’d lost my vitality” [2]. Only days after departing M*A*S*H, Warner Bros. approached him about starring in a new series, offering him a $4 million contract. But it would require him to play a character very similar to Radar so he turned them down [3].

20th Century Fox, the production company behind M*A*S*H, would later ask Burghoff to star in a series in which he would portray Radar as a civilian. Again he turned down the offer [4]. So why did he agree to return for AfterMASH? By the time producers Larry Gelbart and Bert Metcalfe called him in February 1983 and asked if he was interested in a guest appearance, Burghoff had spent a number of years out of the public eye, appearing on stage in a number of plays, and was able to return to the role of Radar without letting it consume him [5].

In early March 1984, Broadcasting reported that one of the 19 CBS pilots for the 1984-1985 season was a half-hour sitcom titled “Radar” that would star Gary Burghoff as Radar O’Reilly, working as a police officer in Kansas City [6]. 20th Century-Fox Television would produce with Bob Schiller and Bob Weiskopf writing the script [7]. The setting for the pilot was soon moved to St. Louis. Filming began on March 26th [8].

On April 9th, The Washington Post reported that “Radar” was under consideration for the 1984-1985 season [9]. However, when CBS announced its schedule at the beginning of May, “Radar” was not on it [10]. The network ultimately decided to broadcast the pilot, now called “W*A*L*T*E*R,” as a CBS Special Presentation on Tuesday, July 17th, 1984 from 8-8:30PM.

Where Did The Pilot Air?

The 1984 Democratic National Convention convened in San Francisco on Monday, July 16th. “W*A*L*T*E*R” was scheduled to air the following day. That night, the networks all planned live coverage of the convention from 9-11PM (Eastern Time). On CBS, “W*A*L*T*E*R” would air from 8-8:30PM, followed by another unsold pilot starring Hal Linden called “Second Edition” from 8:30-9PM. Then live convention coverage would begin. 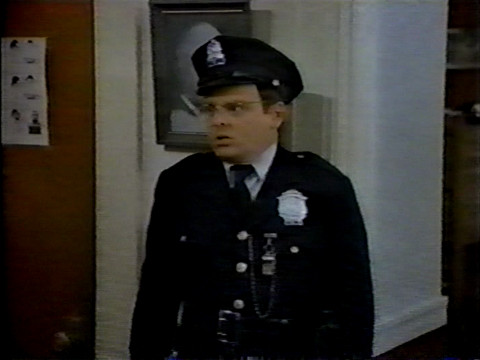 Thus, it appears that “W*A*LT*E*R” was only shown in the Eastern and Central time zones. It is possible that CBS affiliates in the Mountain and Pacific time zones were allowed to air the pilot at a later time or even reschedule it for a later date. Unconfirmed reports suggest that it may have aired in some parts of those time zones.

When viewers last saw Walter O’Reilly at the end of the the January 23rd, 1984 episode AfterMASH, it was early 1954 and he had just married his sweetheart Sandy after forgiving her for fooling around with Claude Greevy. At the start of “W*A*L*T*E*R” it was October 1954 and Walter was a rookie cop living with his cousin Wendell Micklejohn (played by Ray Buktenica) in St. Louis. The two were late for work but wanted to see the start of Walter’s interview with reporter Clete Roberts on television.

Roberts (who had guest starred in two episodes of M*A*S*H as himself) explained that he was catching up with members of M*A*S*H 4077th to see how they were dealing with civilian life. As the interview unfolded over the course of the pilot, Walter revealed that he had refused government subsidies and shortly thereafter lost his family farm. He sent his mother to live with his aunt and moved to St. Louis to become a police officer. Walter also explains that while on their honeymoon, Sandy had left him for Claude Greevy. Contemplating suicide, he wandered into a drugstore where he met the clerk, Victoria (played by Victoria Jackson), who took pity on him and cheered him up. The two became good friends.

While out on patrol, Walter and Wendell were victimized by a pickpocket, leaving Walter distraught because he kept his M*A*S*H picture in his wallet. Before they could investigate, they were sent to deal with a disturbance at a local theater involving a pair of strippers. The two were fighting about a missing bird, which Walter soon located.

Back on patrol, Walter spotted the pickpocket and gave chase with Wendell right behind him. They caught up with the boy but after learning he didn’t have a record, Wendell took off, leaving Walter to take the boy to get a root beer float at the drugstore where Victoria worked. They were able to guilt him into returning the wallet. Walter also made him promise to stay out of trouble and to show up at the drugstore every Saturday afternoon to talk.

The main cast of the pilot consisted of Burghoff, Buktenica and Jackson along with Noble Willingham as Sergeant Sowell, Walter and Wendell’s boss. Guest stars included Sam Scarber, Lyman Ward, Sarah Abrell and Larry Cedar as other police officers; Victoria Carroll and June Berry as Bubbles Sincere and Dixie Devoe, the strippers; and Meeno Peluce as Elston Krannick, the pickpocket.

Had the pilot been picked up, the resulting series would no doubt have followed Walter as his police career unfolded, his budding romance with Victoria and perhaps his friendship with Elston.

“W*A*L*T*E*R” ranked 33rd for the week in the Nielsen ratings, ahead of “Second Edition” which ranked 44th [12]. Tied for 28th were the Tuesday Democratic National Convention coverage on CBS and the Wednesday coverage on ABC [13]. As late as mid-August, Gary Burghoff was still waiting to hear if CBS planned on picking up “W*A*L*T*E*R”. Speaking of the pilot, he said “I feel like I’ve proved that I’m still able to play Walter, even after playing other roles” [14].

However, by burning the pilot off during the summer months CBS had made it very clear it not interested in turning “W*A*L*T*E*R” as a full-fledged series. AfterMASH ended its regular run in December 1984, although one last episode was burned off in May 1985. Although M*A*S*H continues to be shown on television and has been released on DVD, neither AfterMASH nor “W*A*L*T*E*R” have ever been repeated or made available commercially. 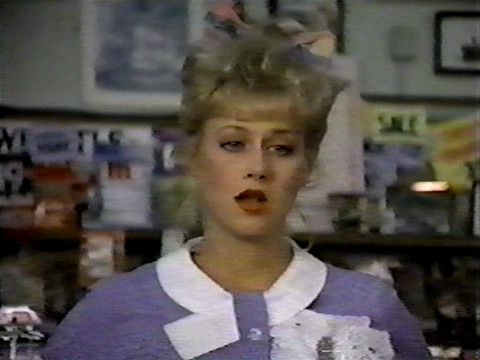 “W*A*L*T*E*R” remains a curiosity for M*A*S*H fans as well as something of a cautionary tale. It was an attempt to sell a series solely on the popularity of a character. Not Gary Burghoff the actor but Radar O’Reilly, the character he played. A character that hadn’t been seen regularly on TV for five years.

And yet, the pilot took Radar out of the picture entirely, focusing instead on Walter O’Reilly. And without Radar, there was nothing to distinguish Walter O’Reilly from any other police officer new to the job. The handful of nods to Radar’s precognition in the pilot seemed out of place and his relationships were undeveloped at best.

As for Burghoff, in October 1984 he told the Hartford Courant‘s Cynthia Wolfson that CBS had passed on “W*A*L*T*E*R” because “they’ve taken all the situation comedies off — replacing them with those nighttime soap opera dramas, continuing sagas. I personally feel that that kind of fare has its place. What bothers me is when it takes over” [15].