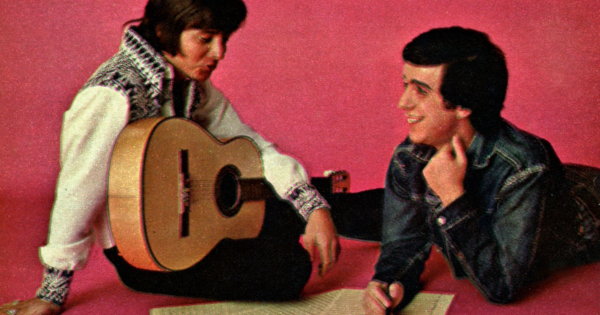 A star vehicle for teen idol Bobby Sherman, ABC cancelled this 1971 spin-off from The Partridge Family after just 14 episodes.

Getting Together (sometimes inaccurately referred to as The Bobby Sherman Show) premiered in September 1971 on ABC, airing Saturdays from 8-8:30PM opposite All in the Family on CBS and The Partners on NBC. All in the Family crushed its competition: Getting Together was dropped at mid-season while The Partners somehow managed to hang on for the entire season before being cancelled.

The sitcom starred Bobby Sherman and Wes Stern as aspiring songwriters Bobby Conway and Lionel Poindexter. Bobby composed the music while Lionel, who was tone deaf, penned the lyrics. The two weren’t yet successful at getting their songs recorded and lived in an antique store with Bobby’s younger sister Jenny (played by Susan Neher). Their landlady, Rita, was played by Pat Carroll. Jack Burns played Rita’s boyfriend Rudy, a police officer. To help pay the rent, Bobby worked at a recording studio.

The characters of Bobby Conway and Lionel Poindexter first appeared in the first season finale of The Partridge Family, broadcast on Friday, March 19th, 1971. In the episode, titled “A Knight in Shining Armor,” Bobby tries to convince the Partridges to record some of his songs. Instead, they introduce him to Lioinel, who sent the Partridges some of his poems. Perhaps the two can work together. So, with Bobby in tow, the Partridges head to Denver to meet with the eccentric Poindexter (they find him wearing a suit of armor) and a creative partnership is born.

“A Knight in Shining Armor” was written by Bernard Slade, who created The Partridge Family. A working title for the episode was “Words & Music.” Getting Together was a Screen Gems production overseen by Bob Claver and Paul Junger Witt, who also produced The Partridge Family. The pair had earlier producd Here Come the Brides for two seasons on ABC, which co-starred Bobby Sherman.

Getting Together premiered on Saturday, September 18th. The debut saw a social worker, uncomfortable with Jenny’s living arrangements, threaten to remove her from Bobby’s custody. In response, Bobby makes the tough decision to ask Lionel to move out, hoping that will convince the social worker he is serious about taking care of his sister. However, the plan backfires when Jenny, upset at the prospect of having ruined her brother’s partnership with Lionel, runs away. Everything worked out in the end, of course.

Critics were split on whether Getting Together was worth watching. Raymond Hart of The Cleveland Plain Dealer suggested it had “about as much chance of making it over the long haul as a sprinter with a sore foot” [1]. The Chicago Tribune‘s Clarence Peterson, on the other hand, called it “a pleasant little story for the kiddies, harmless and entertaining and neither preachy nor patronizing” [2]. Harry Harris of The Philadelphia Inquirer referred to it as “teeny tribulations for teenyboppers,” which could be taken positively or negatively [3].

Getting Together was crushed in the ratings by All in the Family, regularly ranking near the bottom of the Nielsen charts, which at the time regularly included between roughly 65 programs week week. The October 2nd episode ranked in the “upper half” of programs below the 50th spot [4]. The October 16th episode was in the bottom third of programs ranked below the 40th spot [5].

Getting Together was initially supposed to air opposite My Three Sons on CBS, not All in the Family. Had it not faced such stiff competition from All in the Family, or if ABC had scheduled it after The Partridge Family, perhaps it would have lasted longer. The network cancelled the series in November 1971 [6]. The 14th and final episode aired on January 8th, 1972. 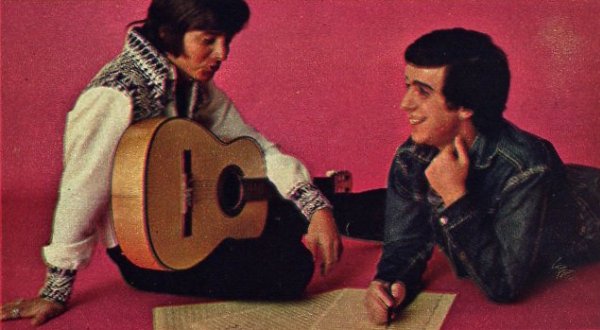 Despite its brief run, Getting Together produced quite a bit of memorabilia. The theme song for the series, performed by Bobby Sherman, was not surprisingly titled “Getting Together” and was released as a B-side on a 45 record (the A-side was “Jennifer”) by Metromedia Records. Metromedia also issued an LP titled Getting Together, which included the theme.

Two tie-in novels were published by Curtis Books: Getting Together by Judson McCall and Getting Together #2 – Bobby: Superstar by Chris Stratton. Charlton Comics released a single comic book based on the series. A trading card set was created by Topps but never officially release. According to the official Bobby Sherman website perhaps only 20 complete sets were produced.

Getting Together never aired in syndication. The backdoor pilot for the show can be found on the Season 1 DVD set of The Partridge Family, released in 2005.

25 Replies to “Getting Together”