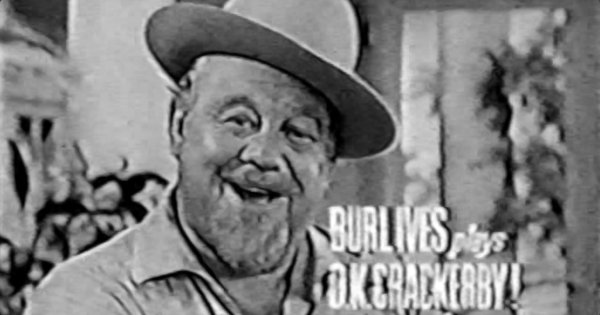 Burl Ives starred in this 1965-1966 sitcom as the wealthiest man in the world. All that money couldn’t buy ratings and ABC yanked the show off the air after 17 episodes.

Animal lover, society writer, and TV Guide reviewer Cleveland Amory created this ABC sitcom. You wouldn’t know that based on contemporary articles about the show or even its own credits. Despite coming up with the concept for O.K. Crackerby!, Amory had next to nothing to with the finished product. In fact, he’d originally planned on calling it “My Man St. John” but star Burl Ives nixed that idea [1]. Amory’s treatment ended up with Abe Burrows, who developed it for ABC. A total of 17 episodes aired during the 1965-1966 season before ABC cancelled O.K. Crackerby! due to low ratings.

Amory’s original idea would focus on Harvard-educated St. John Quincy, hired by widower O.K. Crackerby, the richest man in the world, to help usher his children into the elegant and cultured world of the upper crust. The episodes would present a satirical bent of New England society. Or so Amory hoped. Instead, Crackerby used his money to more or less buy a way into high society for his children and St. John was simply along for the ride.

How about that early ’60s show, “OK Crackerby”, starring Burl Ives as the richest man in the world? Another one-season wonder.
Bill

Singer-actor Burl Ives was cast as Crackerby and commercial personality Hal Buckley as St. John Quincy. According to George Gent in The New York Times, Buckley was hired after Thomas W. Moore, President of ABC, saw one of his commercials for sunscreen and called his agent. Said Buckley:

Mr. Moore saw me in a beach commercial and it was mostly my back that showed. I think it must have put on a marvelous performance. Actually though, a girl rubbed some ointment on my back and I turned briefly toward the camera and said a few sincere words about how soothing it was. I suppose you can say it was the best possible exposure. [2]

Laraine Stephens played Susan Wentworth, St. John’s girlfriend; Dick Foran was Slim, one of Crackerby’s friends; and John Indrisano appeared as the family chauffeur. Rounding out the cast were Brooke Adams, Brian Corcoran and Joel Davison as Crackerby’s children Cynthia, Junior and Hobart. The series premiered on Thursday, September 16th, 1965 opposite the series premiere of Laredo on NBC and the season premiere of My Three Sons on CBS.

Critics either loved or hated the show. Rex Polier of The Philadelphia Evening Bulletin called the show “very slickly done” while Harold Rogers of the Christian Science Moniter wrote that the show had the kind of writing that brings American television closer to its age of maturity” [3]. But Harry Harris in The Philadelphia Inqurier slammed the series, writing that “nothing has appalled us as much as the premise … that money can buy anything [4].

And Jack Gould of The New York Times lamented that “not even Burl Ives could lend much weight to the thinly-drawn money-bags and the personable Buckley as the tutor, had the weight of establishing the half-hours precarious premise. If in the environment of Hollywood TV [Abe] Burrows can extract a sound comedy on conflicting social values he’ll be a wonder. So far Crackerby is O.K. in name only [5].

The first few episodes were produced by Charles Stewart but he was soon replaced by Elliot Lewis [6]. The pilot dealt with Crackerby buying a hotel that didn’t please him. In another episode, Crackerby bribes Hobart with the promise of a mythical Griffin if the boy will just go to a fancy party. Hobart later uses his father’s money to campaign for school treasurer. Other episodes saw a woman try to hire St. John away from Crackerby, a shady businessman tricking Crackerby into discussing plans for a railroad, Crackerby falling in love with a woman at the airport, a young woman (played by Chris Noel) planning to marry Crackerby’s poor nephew and a gossip columnist blackmailing Crackerby regarding an honorary law degree.

ABC announced it was cancelling O.K. Crackerby! in early November 1965, with filming for the last episode wrapping on Friday, November 5th, according to The New York Times. The paper reprinted a statement sent to reviewers and columnists by Burl Ives:

We have had a succession of different producers and directors and the show never did get off the ground in the script department. I can’t say that I am happy that the show did not make it, because of course, one goes into television, as into any medium of theatrical communication, to make a go of it. However, this is one that was not destined to succeed. [7]

The final episode aired on Thursday, January 6th, 1966. It was replaced the following week by Gidget, which was shifted from its Wednesday time slot. A new show, The Blue Light, took over for Gidget. For the three months running October to December 1965, O.K. Crackerby! ranked 76th out of 99 weekly programs with a 14.9 Nielsen rating [8]. By comparison, My Three Sons on CBS ranked 11th with a 23.6 rating and Laredo on NBC 39th with a 19.9 rating.

The pilot episode was broadcast in black and white while the remaining sixteen episodes were shown in color.