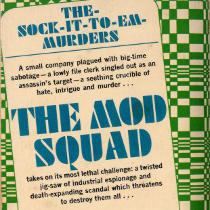 The Mod Squad ran for five seasons and 124 episodes on ABC from 1968 to 1972; a reunion telefilm was broadcast on May 18th, 1979. A total of six tie-in novels based on the series were released: Pyramid Books published five novels written by Richard Deming and Pinnacle Books published one written by William Johnston. Deming also wrote two hardcover stories for Whitman Publishing. This is the third of Deming’s five novels for Pyramid. For the sake of total accuracy, according to the cover the title is The-Sock-It-To-Em-Murders but at least twice interior pages refer to it as The-Sock-It-To-Em Murders. Make of that what you will.

Two versions of the novel were sold, one of which sold for 60 cents and the other for 75 cents. The covers feature minor cosmetic differences but otherwise are identical. I actually have both versions in my collection. Interestingly, Peggy Lipton is missing from the cover on both copies. Someone carefully cut her out of the 60 cent version (which also has a large, black X across the cover) and she has been torn off the 75 cent version. I’ve included scans of both versions for comparison. I’ve also quoted several passages to give a feel for the tone of the novel.

I’ve never seen an episode of The Mod Squad — you can watch a promotional spot for the series here — but that didn’t keep me from thoroughly enjoying The-Sock-It-To-Em-Murders. The bulk of the story takes place at a manufacturing plant and I will admit to having trouble picturing how it looked despite the fact that it was described in detail. I’m sure it would have worked much better on television. There wasn’t much characterization present in the novel, although the members of the Mod Squad itself were given some distinct qualities. 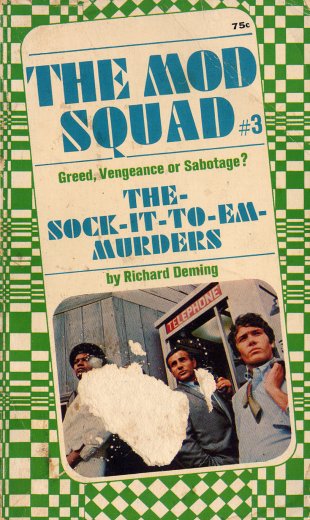 The plot of the novel involved suspected sabotage at the Boyer Fabricating Company and the Mod Squad’s subsequent investigation. Here’s how the Mod Squad was established as the novel opens:

Captain Greer introduced the girl as Julie Barnes, the black youth as Linc Hayes and the white youth as Pete Cochrane. Linc Hayes was a lean, muscular, handsome six-footer with exceptionally white teeth–the front ones spaced slightly apart–and an African haircut. Pete Cochran was built along the same general lines as the black youth, but was an inch shorter and perhaps five pounds lighter. He too was good-looking, with light brown, curly, unruly hair and green eyes. Julie Barnes was a slim ash blonde with hair hanging loose to her shoulders and with brown eyes, delicate features and an exceptional figure. She had a habit of periodically pushing her long hair back from her forehead because it tended to get in her eyes.

Before long, Julie, Linc and Pete are given jobs at Boyer by its president, Harry Nicholson, and begin getting to know their new co-workers, hoping someone will either know something or admit something. Julie becomes a member of the filing department (Nicholson informs her that the company requires its female office employees “to wear stockings, and dresses at least to the knees,” to which she replies “I’ll have to buy one.”) while Linc and Pete become time-study engineers. Julie meets the rest of the filing department and takes a liking to most of them. For some reason, however, Winifred Crowley is less than friendly:

Julie’s smile faded. Despite her rather exceptional good looks, Julie was not the type whom less attractive women automatically disliked on sight. As a matter of fact she tended to get on rather well with other women. Perhaps Winifred was one of those unhappy females who resented all women younger than she was, she thought.

No, Winifred has another reason to resent Julie. Her sister was supposed to get the job Julie was given. Winifred’s uncle turns out to be in charge of the entire filing department and he appears to be playing a hard game of office politics. Julie strikes up a quick friendship with Dolly, one of the other girls in the filing department, and the two start having lunch together:

Julie always felt a little guilty when she lunched with women on diets because she could eat anything she wanted to without gaining weight. Sometimes she was tempted to pretend she was on a diet jut to make the other woman feel better, but had decided that would be both dishonest and silly.

As for Linc and Pete, they don’t have much luck chatting with the men on the floor. Pete does meet and start dating a pretty timekeeper while Linc begins a relationship with Dolly. He takes her to the Black Velvet Club, a topless joint, hoping to impress her by not looking at any of the other girls. For her part, Julie goes on one date with the handsome and rich Byrant Fuller (also from the filing department) before deciding to decline any later dates. The Mod Squad doesn’t think twice about mixing business with pleasure. Things soon become deadly serious when Julie’s supervisor is crushed to death by crane-load of inch thick steel plates. 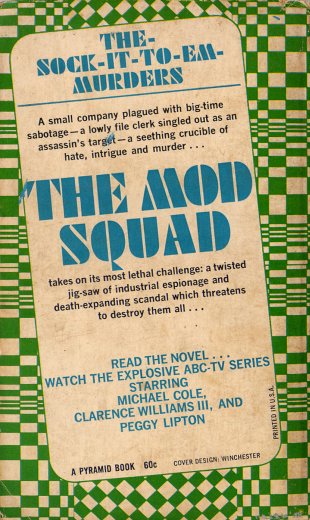 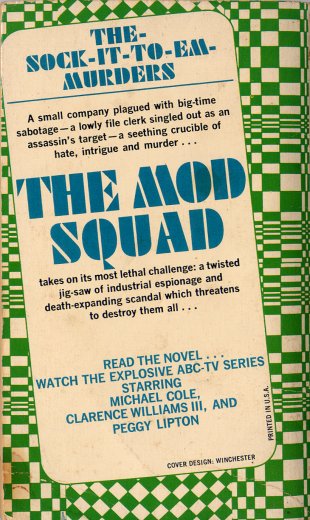 When the Faxton Refinery Products Company wins a pair of contracts worth millions by underbidding Boyer, Harry Nicholson suspects the saboteur/murderer is working for Faxton. The Mod Squad agrees. While other officers dig up information on employees at Faxton, Pete decides to simply break into Faxton’s offices and take a look at its pay-roll records. Linc reluctantly agrees to go with him. Julie stays in the car waiting to make a quick getaway. The two find the information they came for but then run into two teenager burglars, one of whom sets off an alarm by hitting a window with a sledgehammer. Pete and Linc are able to get away safely, however.

Even with the name of the saboteur, the Mod Squad isn’t any closer to learning who was responsible for dropping the steel plates. They only learn that the man in question is the cousin of the president of Faxton. A second attempted murder takes place before Pete and Linc learn that the cousin is none other than Byrant Fuller. Before they can nab him, however, Byrant kidnaps Julie after realizing she (along with Pete and Linc) are cops. He eventually decides to get himself an alibi and then incinerate her using the blast furnace at the Faxton plant. Pete and Linc show up before he can put his plan into action and save Julie:

“Oh, Pete,” she said tearfully,” He was going to burn me alive in that furnace.”
Pete said soothingly, “It’s all right now, Julie,” and began to untie her bonds.

As I mentioned earlier, I really enjoyed reading The-Sock-It-To-Em Murders, which is why this review is longer than usual. It was a little heavy on the technical aspects of manufacturing but the evolution of the sabotage mystery into a murder mystery was unexpected and the dialogue, although occasionally sexist and dated, was fairly realistic. If this was an actual episode of The Mod Squad I think it would have been fantastic. On the other hand, having never seen an episode of the series I may be drastically overestimating how well this story would translate to television.