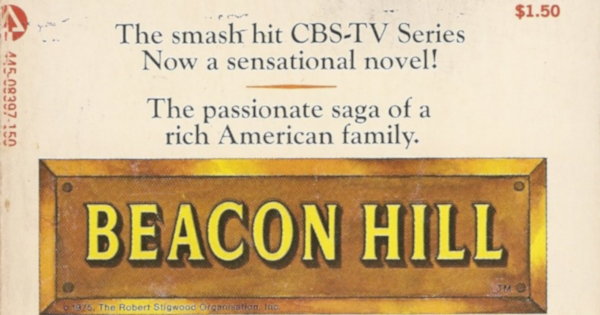 I’ve owned my copy of Beacon Hill for close to 12 years and never seriously considered reviewing it here at Television Obscurities. Why? Because I thought it would be an incredibly dull read. I wasn’t too concerned about never having seen the show, despite this being a novelization, but my suspicion was that it would be very dry and there would be too many characters to keep track of.

I’m glad I changed my mind. I really enjoyed Beacon Hill and at times couldn’t put it down. I can’t say whether the series was any good or whether Henry Clement accurately captured the characters or the tone nor do I know if the novelization stuck to the teleplay by Sidney Carroll. But I can say honestly that it was a lot of fun to read.

There’s a character list at the start of the book, which at first seemed to confirm my fears about the large cast. After just a few pages I realized I wasn’t referring to it much at all. I did have a hard time keeping track of some of the characters but never to such an extent that it pulled me out of the story.

For those who don’t know, Beacon Hill was an attempt by CBS to adapt the hugely popular BBC series Upstairs, Downstairs series (which first aired in the United States in January 1974 as part of Masterpiece Theatre on PBS). It was a very expensive series to produce and despite high initial ratings it was a huge failure, yanked off the air after just 11 episodes.

The series was set in Boston during the Roaring Twenties and revolved around the wealthy and politically connected Lassiter family, second generation Irish-Americans. They were led by family patriarch Benjamin (played by Stephen Elliot) and his ailing wife Mary (played by Nancy Marchand). The two had five children: son Robert (played by David Dukes), who lost an arm in World War I; Rosamond (played by Kitty Winn), who was considered plain in comparison to her sisters; Fawn (played by Kathryn Walker), who led a Bohemian lifestyle; Emily (played by DeAnn Mears) who was married to Trevor (played by Roy Cooper) and had three children; and Maude (played by Maeve McGuire), the eldest child married to Richard (played by Edward Herrmann) and mother of four. Linda Purl played Betsy, Emily and Trevor’s 18-year-old daughter.

As I said, it’s a big cast. Even more characters were introduced in the premiere episode, and thus in the novelization, including two maids and Mrs. Hacker’s nephew Bryan (played by Paul Rudd), all fresh from Ireland. I think the maids were Mrs. Hacker’s nieces, actually. 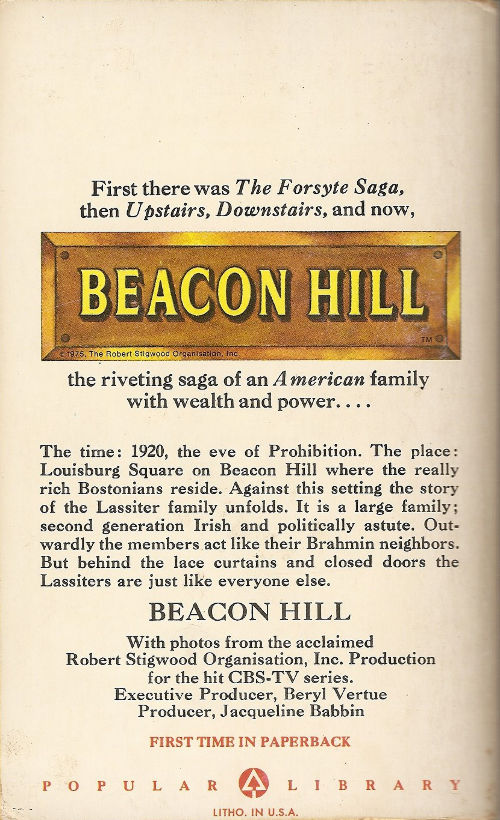 Back Cover to Beacon Hill – Copyright 1975 The Robert Stigwood Organisation

It wasn’t until I finished the book that I realized there wasn’t much to the plot. At 253 pages, Beacon Hill is long for a TV tie-in. The premiere episode ran two hours and I’m sure the author added his own embellishments to certain scenes. The chapters are very short, however, some only one or two pages. There are also 12 pages of black-and-white stills from the series but they don’t add much to the thickness of the book itself.

The story picks up with Benjamin and Mary returning from a trip their Louisburg Square home in the wealthy Beacon Hill neighborhood. Some family members were waiting for them, others couldn’t make it. Obviously there’s a lot of family drama, particularly between some of the sisters. Robert is sullen and may have a drinking problem. The introduction of Prohibition is discussed and the family decides to throw a Prohibition Eve party.

Before long, even more drama is introduced. Robert has been frequenting a black brothel, Fawn is fooling around with her Italian vocal coach, and Emily is in love with her grandfather’s chauffeur, who also does his dirty work on the side.

There’s not much of an ending to the novelization. The final chapter both wraps up some storylines and introduces new ones. It left me wanting more which is unfortunate because it’s unlikely I’ll ever get to see any episodes of the series. At the very least I’d love to see the two-hour premiere so I can compare it to the novelization.